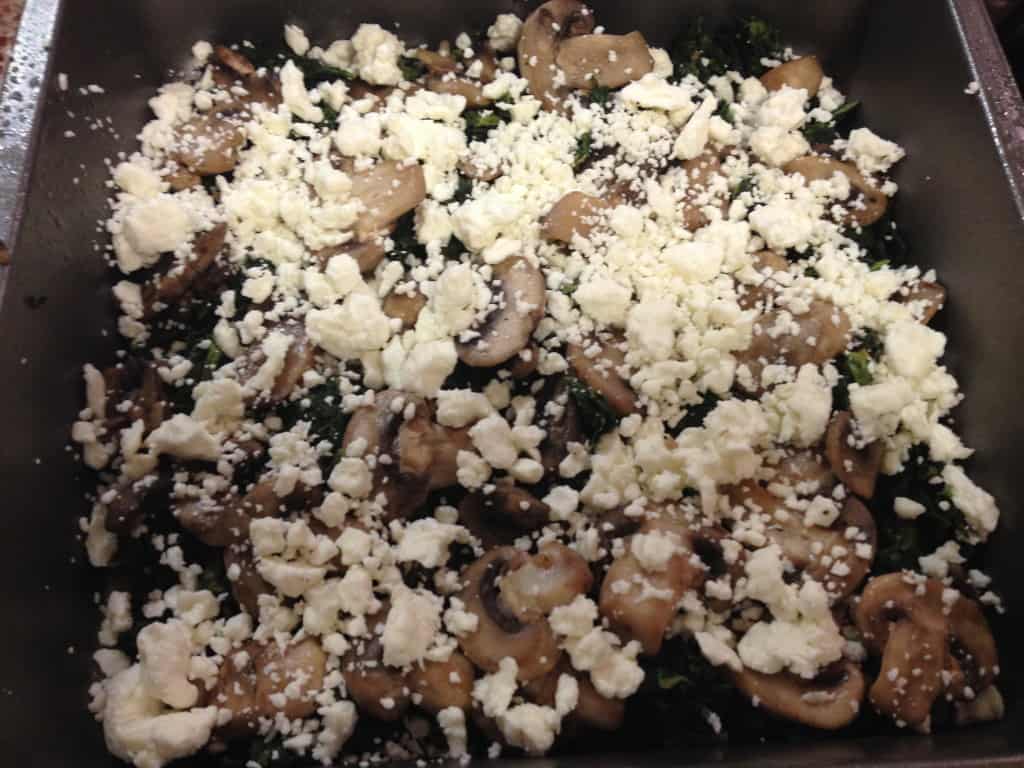 Kind of a mish mash of meals today. Let’s dig in…

I would love to find more ways to cook eggs other than breakfast. I’ve tried frittatas a few times and some are okay, but none have stuck. My husband is opposed to quiche because of memories of having to eat it during Christmas when he really wanted bacon and eggs. I knew I wanted to try this Spinach, Mushroom and Feta Crust-less Quiche on Budget Bites (my new fave food blog). But would the hubs go for it?

So I called it a “frittata” and asked him to try it for breakfast on my way out to take the kids to school.  When I returned he told me the ratio of veggies to eggs was too much. That’s okay, because that meant more for me at lunch that day. Great recipe, but I’ll probably play around more with it. 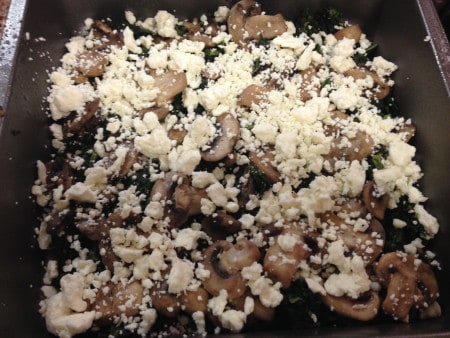 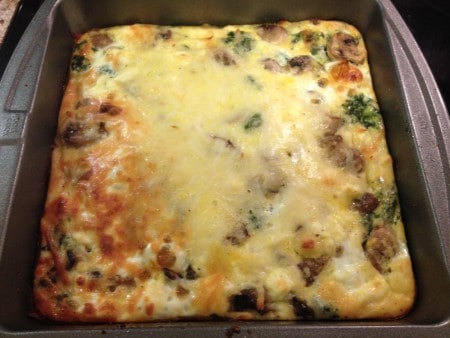 I think it’s good to have a versatile homemade red sauce to use in different meals. I have started adding some veggies to mine for more flavor and nutrition. Here’s what I did:

Sauté onion, red pepper, chopped carrot or two and chopped celery until softened. At the end, add about 5 cloves of minced garlic for about a minute. 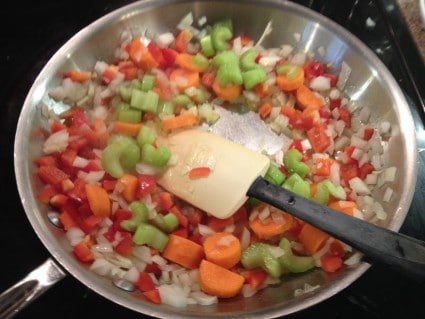 If you don’t want chunks of veggies, blend the veggies with a can of tomato sauce until smooth (no tricking kids so show them or better yet, have them help!). Add this with the rest of the ingredients in slow cooker on high for about 3-4 hours or low for 6-8. You can also cook over the stove too. Adapted recipe is below.

I’ve made this tried and true recipe since writing Fearless Feeding a few years ago. Big A, who used to fight over the last piece with her dad, is no longer into these but will still eat them if hungry. But now me and the hubs like it. The key is the bread crumbs. I like the organic bread crumbs from Trader Joes because they have a nice flavor. Some people like to use panko bread crumbs. I make it with a honey mustard which is just equal parts plain yogurt or mayo, honey and Dijon mustard. 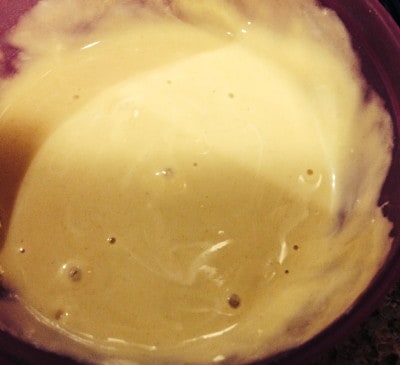 I have been on a mission to make a homemade, crispy thin crust pizza. I found this site that recommends using high gluten flour (I used King Arthur bread flour) and refrigerating the dough for 24 hours. I don’t have a standing mixer but I do have a bread machine that kneads the dough. I tried the dough recipe here but it turned out like this using my bread machine: 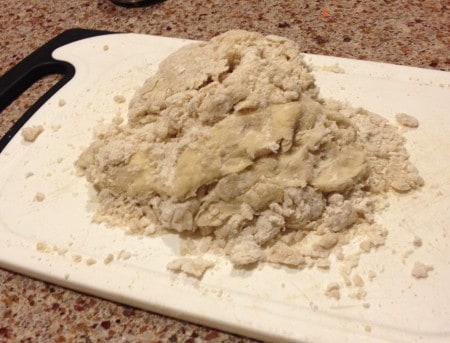 So I stuck with the basic recipe that’s provided in the bread machine cookbook and it looked much better. 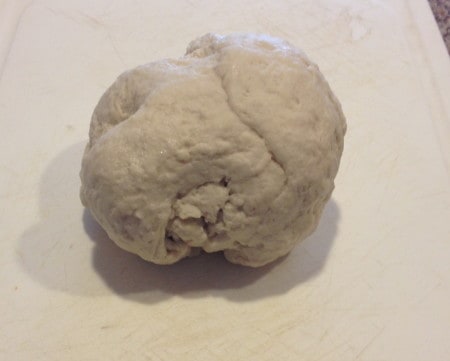 I divided the dough in half and put the two dough balls in the fridge (in bowls covered with plastic wrap). I took it out the next day after about 26 hours and let it rest for over an hour.

I saw a suggestion on you tube to spread the dough out over the back of cooking pans, so I sprayed two pans with cooking spray and tried it. Instead of a rolling pin, I slowly massaged the dough out with my hands. I was amazed how well this worked! Then I put these directly in a 450F oven for about 4-5 minutes to precook it to make it crispy. I took them out and then transferred the dough to a cutting board topped with some cornmeal and put on the toppings. Oh, and the whole time my pizza stone has been heating in the oven. If you look at the second picture below you can see it’s already crispy on the bottom. 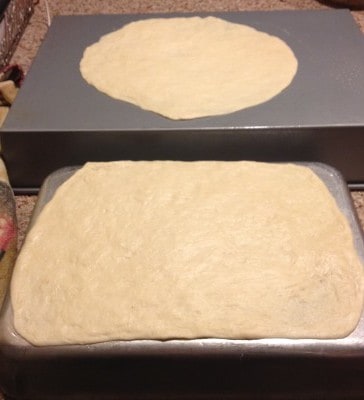 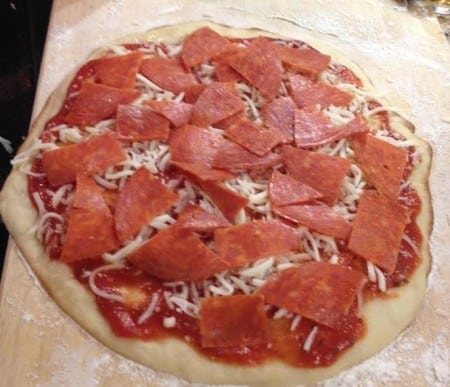 After the toppings were done, I slid the first pizza on the hot stone (kids) and it was done in 6 minutes.  The second pizza with more toppings took about 7 minutes.

After 6 years of trying for a crispy crust, I did it. My pizza Nazi (Big A) really liked it and so did the hubs. Little D always loves pizza.

I never gave up because I LOVE thin crust pizza. And in my book, there’s nothing better than pizza and a salad. Agree? 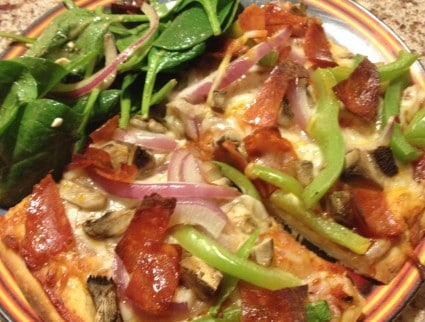