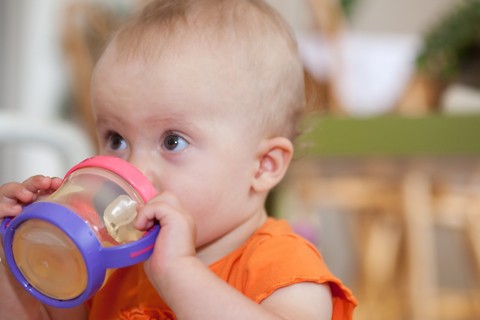 I recently wrote about my 4-year old who only drinks milk from her straw sippy cup wondering when to give them up. A number of you mentioned you had no idea either. So I asked around, did some investigative work, and discovered 5 important things parents need to know about starting, using, and stopping sippy cups.

Babies usually start solids by the time they’re 6 months. This is also the time it is okay to introduce sips of water with the American Academy of Pediatrics (AAP) now recommending parents wait to introduce juice until toddlerhood. It’s a good idea to get a few starter sippy cups, with handles, lids, and a hard sprout, to get your child used to the idea that liquids (including milk) can come in something other than a bottle or breast. That being said, some experts recommend skipping the sprout cup and going straight to #3 (straw cup).

While babies will have fun throwing these cups for a while, by 9 months many will start drinking from them. The AAP recommends phasing out the bottle between 12 and 24 months of age and if possible, breastfeeding for at least one year. 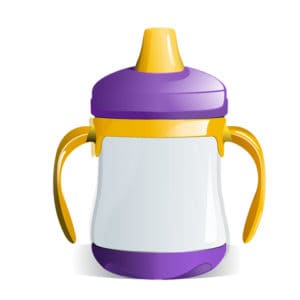 Once your child is using a sippy cup you need to use them wisely. According to Healthy Children, a website powered by the AAP, avoid using sippy cups as a pacifier or allowing kids to sip on them throughout the day unless it’s filled with water. Sprout sippy cups filled with milk, juice, or juice drinks, allow sugar (even natural sources) to stay in the mouth longer and increase the risk of tooth decay.

This may be why cavities have increased by 15 percent from 1994 to 2002 in children 2-5 years old according to the Centers for Disease Control and Prevention (CDC).

Traditional sippy cups are only supposed to be used as a short transition to real cups. Overuse of sippy cups can cause more than dental caries, they can also contribute to speech difficulties.

Because children suck on sippy cups the way they do bottles, if used too long, it can change the position of the tongue and teeth, potentially causing lisps and articulation problems. According to this Web MD article, the traditional sippy should only be used for about a month. Using cups with a straw is much better for speech development and dental health.

Bottom line: switch to a straw cup as soon as you can. 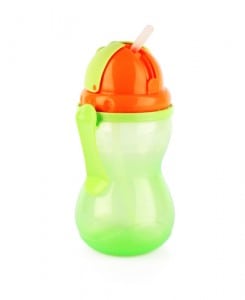 The AAP recommends teaching children to start drinking from regular cups between 12 and 15 months. Once children master this, you might want to use regular cups at meals and straw cups for water on the go.

Another drawback to young children sucking for too long is something called Oral Myofunctional Disorder (OMD). According to the International Association of Orofacial Myology’s website, the symptoms include one of the following:

These abnormal habit patterns, functional activities, and postures can open the dental bite beyond the normal rest position. This can result in a disruption of dental development in children and over-eruption of selected teeth in adults.

A prime example of an OMD, familiar to all pediatricians and dentists, is a retained sucking habit or use of a sippy cup. While it is tempting to ignore such habits since some children do outgrow them, many children do not spontaneously discontinue noxious habits and will need help in eliminating the habits. 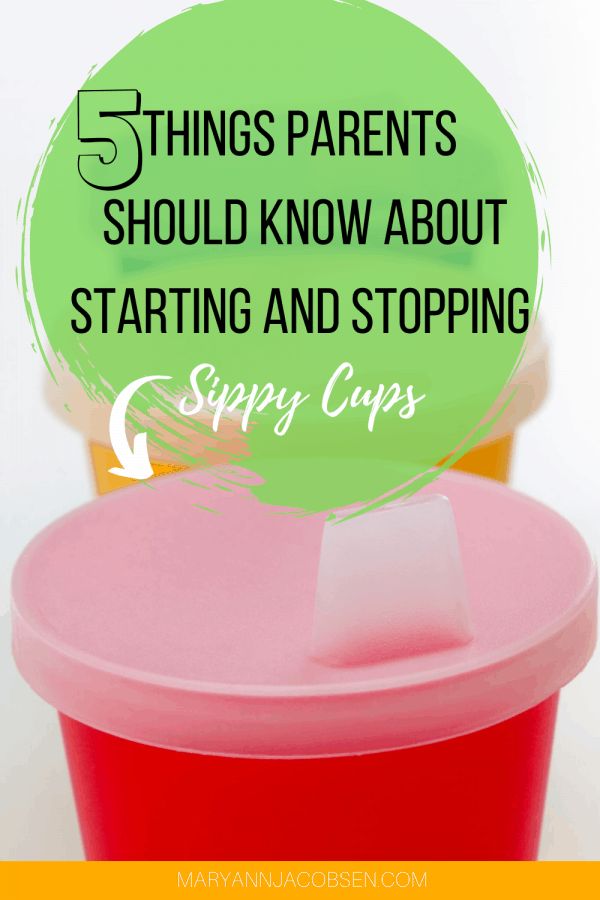 5. Part with sippy cups between 2 and 3 years

According to the AAP Pediatric Nutrition Manual, children are developmentally ready to give up sippy cups by 2 to 3 years of age. Will it hurt to use them to prevent spills once and a while? Probably not. If your child uses an open cup and some sippy cups with straws it is probably okay.

But just like we advance textures with our babies and let toddlers use utensils, we have to do the same with drinking. It’s an important and overlooked part of development.

Anyone having trouble getting your child to give up the sippy cup habit?

For more on feeding kids at every age and stage, check out Fearless Feeding: How to Raise Healthy Eaters From High Chair to High School