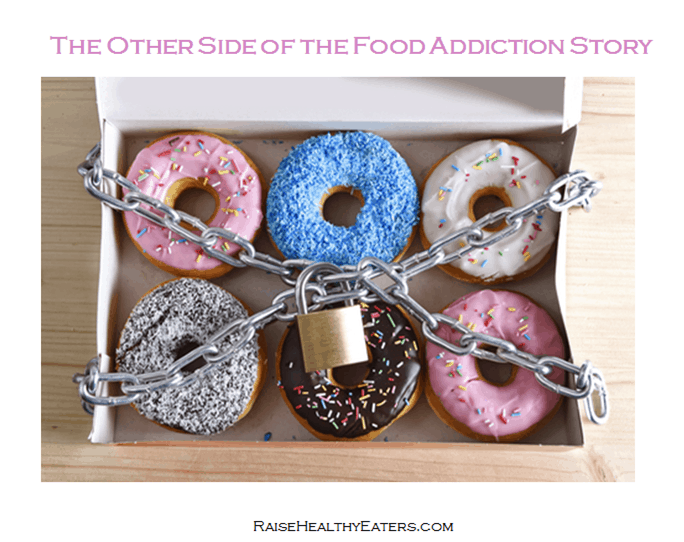 “These cookies are so addicting! I could never keep them in my house.” That’s what the woman at the party said to me as she reached for another helping of double chocolate chip cookies. When it comes to children, parents are acutely aware of the food addiction phenomenon too. I often get emails from parents worried that their child is addicted to sugar.

As we focus on moderation, we have to hit on the subject of food addiction. That’s because this message has become increasingly prevalent in the press and in popular diet books and blogs. And it comes down to this: if you believe it’s not possible for people to eat certain foods in moderation, it won’t be possible.

Today, we are going to take a deeper look at the food addiction theory, so you and your family can avoid the unintended consequences of this overly simplistic (and fearful) view of eating.

What is food addiction?

In other words, a clinical diagnosis of food addiction does not exist. But the characteristics — different from eating disorders that also have a psychological and behavioral basis — focus mainly on the addictive substances’ effect on the brain. This falls in line with the classic definition of addiction: “…a chronic, relapsing brain disease that is characterized by compulsive drug seeking and use, despite harmful consequences.”

The theory currently being researched and sensationalized in the media is that hyper-palatable foods high in sugar, salt, and fat can become addictive like drugs because they share similar reward pathways in the brain. This is the neurobiological response to repeated, large intakes of palatable foods resulting in changed reward circuitry in the brain. It starts with the release of “feel-good” dopamine and opioids, followed by overconsumption. As a result, the feel-good response gets blunted, causing people to need even more of the food to get the same reward.

The closest thing available to a diagnostic tool is the Yale Food Addiction Scale, a questionnaire aimed to identify eating patterns that are similar to those found in classic areas of addiction. So with this basic overview, let’s touch on some holes in this theory that you may not be aware of.

There is no consensus on food addiction. In fact, it’s a controversial subject among health professionals. Yes, there is research, but it is still considered a theory in the testing stage. In the review “Is Food Addiction a Valid and Useful Concept?” Dr. Hisham Ziauddeen, the senior research associate at Cambridge University, points out that research has not been able to pinpoint an addictive substance like drugs and alcohol. It is sugar? Sugar and fat? Sugar, salt, and fat? How much will elicit a response?

This is how he describes the issue in the paper: Existing models cannot yet go beyond relating addiction to broad categories of high-fat and high-sugar or hyper-palatable foods, and there are no current ideas about a particular concentration of nutrient(s) that might engender the addictive process.

“I think the term food addiction sounds like something that many of us may be able to identify with probably because at some point all of us have been greatly tempted by food that we feel we shouldn’t really eat and have often failed to resist the temptation,” he says. “However with food addiction, we are really talking about something more severe, an addiction like alcohol or heroin addiction. In my view, the most important fact that people need to bear in mind is that so far we don’t really know if such a condition really exists.”

2) The most convincing studies are with animals

The strongest evidence for food addiction has been shown in animal studies, which is only the starting point of research. In these studies, researchers use highly palatable foods and very structured feeding environments. The rats do show escalating, binge-like eating behaviors. But when high-sugar or high-fat is fed in isolation, in addition to the addiction-like behavior (withdrawal symptoms), rats actually self-regulate and do not gain weight.

But when fat and sugar are given together in a cafeteria-style diet, they do gain weight but do not exhibit withdrawal symptoms.  And reward systems in the brain differ. For example, with drugs, dopamine release stays consistent across various administrations but with eating, dopamine release stops when the food is no longer novel or the individual is no longer hungry.

“I think the animal findings are very important as they do suggest that food addiction is plausible,” said Ziauddeen. “However, once we get into humans in their real-world environments, the issue becomes a lot more complicated.” Additionally, Ziauddeen points out in his review that brain imaging studies on adults are limited with inconsistent results. 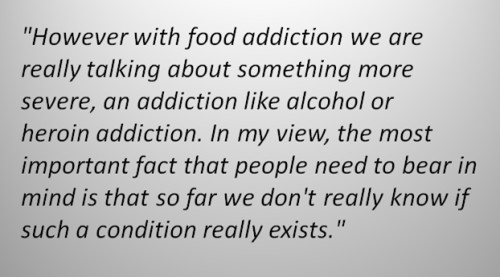 3) It doesn’t take into account other reasons people eat

Unlike drugs, people need to eat. And they eat in the absence of hunger for many different reasons such as boredom, stress, negative mood, habit, and as a response to chronic dieting. As another review points out, this too could “lead to neurobiological alterations in complex central regulatory systems related to eating.” If someone believes that their eating is due to something they can’t control, food addiction, they may never seek help for the underlying reasons they have issues with food.

Think about how this can play out in real life. A woman reads about food addiction and senses she is addicted too. She avoids palatable food only to eventually eat too much of them. When she becomes a mom she watches her three-year-old beg for sweets and fears this same addiction, so she keeps those foods out of the house. Then the child reaffirms these mom’s fears when he actively seeks those foods out of the home when he gets older, even sneaking when he can. Is it really the food or the “all or nothing” beliefs resulting from food addiction messages?

Read: Got a Food-Obsessed Kid? Research Warns: Don’t Restrict Them

When it comes to addiction to drugs or alcohol, abstaining from the addictive agent is typically recommended. There are groups like overeaters anonymous that follow a similar model to alcoholics’ anonymous but there is no research showing this model is effective.

The top treatment for binge eating disorder isn’t abstinence or restrictive diets, it’s cognitive behavioral therapy. This where therapists help people change the way they think and relate to food. In fact, the problem foods are usually brought in so people can learn how to eat those foods without binging. Mindful eating is another therapy that has shown promise in this area.

Unfortunately, most people with eating issues do not know these types of treatments exist because they are rarely given air time. In one survey, people with self-reported binge eating were less likely to believe that there are effective treatments compared to those who don’t have this issue. The survey also revealed that two-thirds believe that certain foods are addictive and that strict dieting is the antidote to binge eating.

I’m not arguing that food addiction may not exist at all or that our food environment isn’t problematic. It’s just the overly simplified version of the story that has misled a large portion of people who wrongly believe they (and their kids) are helpless when it comes to food, and this has had real consequences.

“While the idea is certainly a plausible one, it is very likely that even if we do find it, it will be a condition that affects a small group of people who have serious difficulties with food,” said Ziauddeen. “Much like how a lot of people drink alcohol but only a small number get addicted to it, everyone eats but only a small group may actually be addicted to food.”

It comes down to this: we have to eat to live. And if we really want to change the food environment for the better, we need to stop giving all the attention to the foods we want people to eat less of, which ironically, makes them want them even more. To raise a moderate eater, you need to teach kids that food doesn’t have power — they do. Fear-mongering about food might sell books and draw readers, but as far as I can see, it hasn’t made us any healthier.

How to Raise a Mindful Eater Post Series
1. Obstacles and Benefits to Raising Intuitive/Mindful Eaters
2. The Importance of Self-regulation and Stress Management
3. Myths About Food Addiction That Keep it Alive
4. The Real Reason Children Crave Carbs [Next]
5. The Power of Paying Attention at Meals
6. How to Build Your Child’s Self-Control Muscle
7. How to Keep the Weight-Obsessed Culture from Harming Your Child’s Relationship with Food
8. My New Book: How to Raise a Mindful Eater