“I’ve got the results of your bone density scan,” said the nurse from my doctor’s office. “The doctor wanted me to tell you, you have the bones of a 30-year old.”

I’m not going to lie, being 51, this was nice to hear. But I wanted more details on what that exactly meant. I did my own research as soon as they sent my results.

I didn’t have to get a bone density test, but I wanted to know where I stand. Especially as I inch closer to the period of rapid bone loss which occurs one year before a woman’s final period and two years after.

For some strange reason, bone health doesn’t get the air time other health concerns get. But midlife is the ideal time to address it and start taking preventative measures to ensure healthy and strong bones for a lifetime.

So, let’s get into the nitty-gritty of what every midlife woman needs to know about bone density.

According to the International Osteoporosis Foundation, one out of three women over 50 will sustain an osteoporotic fracture at some point in their lives compared to one in 8 women who will be diagnosed with breast cancer. And the total risk of hip, forearm, and vertebral fractures is about 40%, which is equal to the risk of heart disease.

In fact, for women over 45, those with osteoporosis will spend more time in the hospital than those with diabetes, myocardial infarction, and breast cancer. Hip fracture is the most concerning according to John Hopkins:

One in three people who lived independently before a hip fracture spend a year or more in a nursing home afterward. Forty percent of hip fracture sufferers are unable to walk independently a year later, and 60 percent can no longer take care of everyday necessities, like getting dressed.

Yet according to an International Osteoporosis Foundation survey done over 11 countries, most midlife women weren’t aware of their risk and didn’t talk to their doctor about it.

BMD testing is the “gold standard” for diagnosing osteoporosis because of the established relationship between bone mineral density (BMD) and fracture risk.  And for women without a history of fractures, BMD is the best predictor of osteoporotic fracture risk.

BMD is determined using a dual-energy X-ray absorptiometry (DEXA) scan, which takes about 5-10 minutes. It checks how dense bones are by using two low dose X-ray beams. Radiation exposure is low. For instance, a chest x-ray takes 60 uSv radiation while DEXA is only 1-4 uSv and a mammogram is much higher at 400 uSv.

DEXA measures bones in different areas typically the spine and hip giving you an average BMD. This is then compared to the bones of a healthy 30-year-old in the form of a T score of 0. A normal score ranges from one standard deviation lower than that (-1) to anything higher. Osteopenia, the low-bone mass stage before osteoporosis, is a T score between -1 and -2.5. Osteoporosis is A T score below -2.5.

There are also Z scores that compare your bone density to others your same age, but T scores are used to determine bone mass. It’s important to note that each standard deviation on T and Z scores account for about 10-12% bone mass.

So how are women doing? 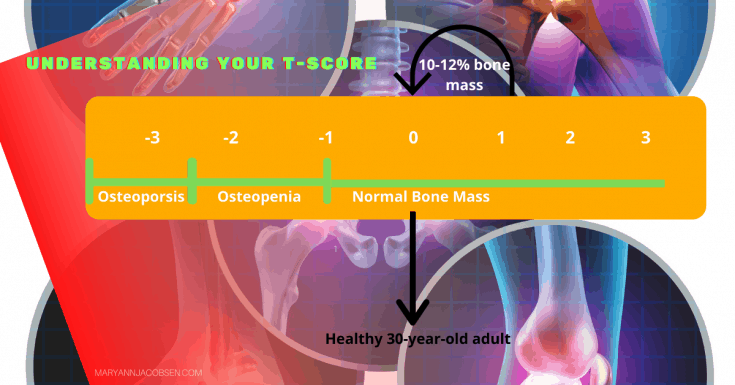 Fractures can still occur at different BMD levels because there are other factors at play. The Fracture Risk Assessment Tool (FRAX) developed by the World Health Organization helps women determine important risk factors such as age, sex, BMI, smoking, prior fracture and certain medications. You can access the test here.

Of course, with increasing age, the risk of osteoporosis increases, especially post-menopause. Women with a lower weight are at higher risk (<127 pounds), and those who smoke and drink 3 or more alcoholic beverages a day. So is a prior fracture, family history of osteoporosis, the use of certain medications like glucocorticoids, and going through menopause early.

There are other risk factors not addressed on the FRAX score like low vitamin D, lack of weight-bearing activity, and weight cycling. Additionally, bone mass development during adolescence can play a key role in bone health at midlife.

Read: Why Adolescence is the Ideal Time to Invest in Bone Health

The US Preventive Services Task Force recommends BMD testing for all women 65 and older and/or those with a 10-year- predicted risk of fracture at 8.4% or greater determined by a FRAX score. Yet if all women follow this, some women with low bone mass will go missed.

“The horse is out of the barn by then,” says menopause expert Dr. Mache Seibel about waiting until after 65 to check bone density. “The bone is gone, what are you going to do?” He suggests those at risk get a baseline bone density in their 40s and everyone else at least by 50. Then you can check it two years later.

Don’t miss my interview with Mache Seibel on episode 28 of The Healthy Family Podcast.

4. Know what you can expect to lose

Given that my T-score was .5 and .4 I wanted to know is how much could I expect to lose in that critical period also called transmenopause. According to results from the study of women’s health across a nation (SWAN), cumulative bone loss stretching 5 years before the FMP and 5 years after is about 10%, but varies based on ethnicity.

So, figure out where you are and how much you might have to lose. If I lose as much as this study says, about 10% which is about 1 standard deviation, I will be down to a -4 and -5. Even though that would be in the normal range, I want to do all I can to preserve my current bone mass.

If a woman just hit menopause, she is two years into the rapid bone loss and would estimate to lose as much as 4% more. 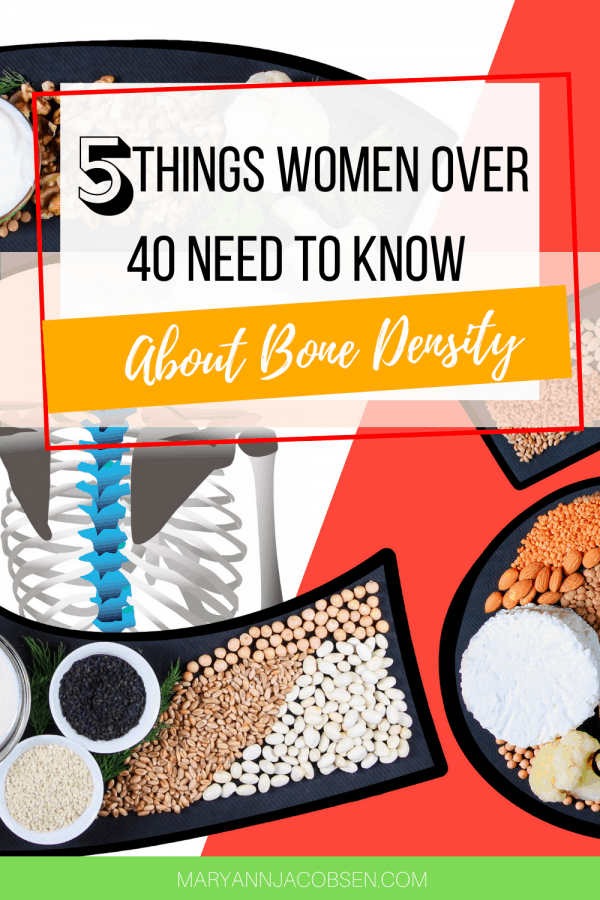 5. Know all the options

There are several high-profile women who have dealt with bone health issues including Sally Field. Knowing she had a family history of osteoporosis and was petite, her doctor ordered a BMD baseline test in her 40s.

When she was 50, she had osteopenia. She took estrogen to help her bones but stopped when the WHI study came out. At 59, she was diagnosed with osteoporosis.

“But it’s silent,” she warns in this article on Everyday Health. “You don’t know it’s there unless you’re getting bone density tests and you have someone looking out for you, like a really good doctor.”

She went on to take a medication to help her bones, took vitamin D, and added weight-bearing exercises and the bone loss stopped. With her strong family history, the medication was needed, which studies show decrease fracture risk by 50%. Had she waited until 65 to get screened who knows what would have happened?

It’s not the scope of this post to get into all the things women can do to boost their bone health. Don’t worry, that will be coming. But I am very excited about the research on different types of exercise and bone health. In fact, a review study showed that combined exercise can help preserve bone loss that occurs during this phase and after.

For example, in one study postmenopausal women with osteopenia briskly walked on a treadmill for 30 minutes and then stepped on a bench for ten minutes, 3 times a week, for 24 weeks. They had increases in BMD of the L2-L4 femoral neck of 2% and 6.8%. The control group decreased bone mass in those areas by 2.3% and 1.5%!

I’m digging into this research now and can’t wait to share what I find. So be sure to subscribe below and share any stories you have about bone density in the comments. Now’s the time to invest in our bones!