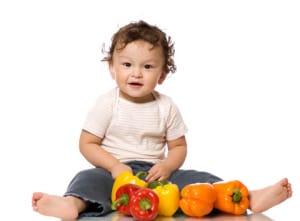 Jenny thought her rowdy preschooler was engaging in normal “boy” behavior. But when her son entered the first grade, she started noticing that he couldn’t sit still or focus like the other kids. He was also impulsive, often endangering himself by running off at the worst times. She finally took him to a doctor and found out he had Attention Deficit Hyperactivity Disorder (ADHD)

One in ten children lives with ADHD. Children diagnosed with the condition are more likely to experience depression, bipolar disorder, and anxiety. No one knows exactly what causes this leading disorder but experts believe that it has both genetic and environmental influences.

Two recent research reviews examined whether or not diet can help treat ADHD. While both reviews cite compelling research, each acknowledges that more studies are needed to draw conclusions. As I read both of these papers, one word kept popping up in my mind: prevention.

You see, children with ADHD often have low levels of iron, zinc, magnesium, vitamin D, and omega-3 fatty acids – the same nutrients needed for proper growth and development. Research also suggests that some children react to artificial colorings and additives in food.

So doesn’t it make sense that diets rich in these nutrients could help prevent ADHD? While the research isn’t able to answer that question, I think it’s worth considering. Let’s take a look…

It’s hard to believe but sixty percent of the brain is composed of fat! Docosahexaenoic acid (DHA), an essential fatty acid found mostly in fish and fish oils, is required in high quantities in the brain and retina. Eicosapentaenoic acid (EPA) also plays a role in the brain working synergistically with DHA.

According to a recent study published in Nutrition Reviews, omega-3 fatty acids hold the most promise for nutritionally treating ADHD and/or learning disabilities. In a recent UK study, children with developmental coordination disorder (5-12 years old) were supplemented with 552 mg of EPA and 168 mg of DHA for 3 months which resulted in improved behavior, increased reading age by 9 months (3 months in the control) and spelling age by almost 7 months (1 month in the control). Before the study, these children were a year behind in both reading and spelling.

DHA and EPA are essential in little ones’ diets because their brains are still developing. Unless your child eats fish on a weekly basis, they are falling short on DHA and EPA. Unfortunately, there are no recommendations for DHA in the United States. International health groups, however, do provide recommendations for adults. According to the Omega-3 Institute, if you take these international recommendations and adjust them to the calorie intakes of young children, 2-3-year-olds need 145 mg per day of DHA and 4-6-year-olds need 200 mg.

So what’s a mom to do? Include fish meals 2-3 times a week including salmon, tuna, halibut, shrimp, and trout. And if your little one won’t eat fish consider supplementing with fish oil (I’ll be reviewing some supplements soon). If you are pregnant or breastfeeding, aim for 300mg of DHA per day.

Read: DHA for Kids: What Parents Need to Know

Children with ADHD tend to have lower levels of iron, zinc, and magnesium than kids without the disorder. In children under 3 years of age, one-third are anemic and 1 in 10 are iron-deficient. If left untreated, iron deficiency can result in poor cognitive development and can adversely affect behavior. Studies show that children with the lowest iron levels experience more severe ADHD symptoms.

To ensure adequate intake of iron, offer children meat and poultry often as well as iron-fortified cereals combined with a vitamin C-rich fruit (to increase the absorption by four times!). Check this list for iron sources and add vitamin C-rich foods to plant-based sources of iron.

Zinc, the next mineral on the list, not only helps protect the immune system, but it also plays a role in the developing brain. As zinc levels plummet, the symptoms of ADHD increase. One theory is that certain food additives accelerate the excretion of zinc from the body in susceptible individuals. Zinc can be found in meat, poultry, beans, fortified breakfast cereals, yogurt, almonds, and cashews.

Magnesium, the last mineral associated with ADHD, is needed for over 300 biochemical reactions in the body. Low magnesium levels impact brain health in a variety of ways such as decreasing blood flow to the brain and lowering energy metabolism. Research suggests that up to 85% of children with ADHD may be deficient in magnesium. Check this list for magnesium sources including nuts, spinach, soybeans, and black beans.

Although we’re mostly focusing on nutrition, the effect of artificial colorings and additives deserves attention. According to a 2009 review in the Harvard Medical Health Letter, a small segment of children are susceptible to artificial additives in processed foods.

In fact, the findings of a recent study in Britain resulted in the United Kingdom’s Food Standards Agency’s request for food manufactures to remove six coloring agents from children’s products.

To keep the intake of such food additives low, go easy on candy, colored cereals, soda, and fruit drinks.

The Nutrition Maneuver All Parents with ADHD Kids Should Make

Omega-3 fatty acids, iron, zinc, and magnesium are essential nutrients for growing kids. And if they happen to prevent ADHD, then that’s a big bonus.