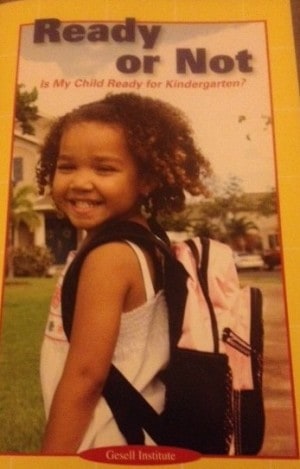 I was sitting in the kindergarten introductory class as Little D is supposed to start school next year. My ears perked up when they touched on the topic of readiness because I’m not sure my little guy is ready for this big step.  He has been in speech therapy since he was two and he’s still not very interested in learning in the traditional sense. Sometimes it seems he knows his letters and other times he doesn’t.  He only traces his name and will only do that at preschool and very rarely at home.

Many of the moms with kids his same age talk about how their child is reading and writing already.  These parents aren’t bragging, but it’s obvious that even though Little D will turn 5 in plenty of time for school, he is behind his peers.

I got a nice little booklet from the Gesell Institute entitled Ready or Not: Is My Child Ready for Kindergarten?   In this booklet they differentiate between chronological age and developmental age:

Then they go on to explain something that I think is particularly important, but not stressed enough:

It is important to understand that faster is not necessarily “better” and slower is not bad.  The simple fact is that children develop at different rates.”

Except for sports and technology, Little D has always done stuff late, from walking to climbing to talking.

I am well aware that we live in a society that values doing things early (and youth and being thin but that’s for another blog post).  We do this all the time with kids’ eating.  What parent hasn’t seen another child eat everything only to feel their not-so-adventurous eater doesn’t measure up.  But they need to remember what is mentioned above — faster is not necessarily better.

The real problem isn’t that kids develop at different rates, it’s that kids get the message that doing things slower means they will never be good at that particular thing.  This happens through pushing, labeling and pressuring a child before he is ready.

So we don’t pressure Little D or show any indication that anything is wrong because it’s not.  We ignore that voice that says he needs to do it now or else he will never do it.

When you least expect it, expect it

Just as I was polishing this essay up, Little D threw me a curveball.  After seeing his sister make some Valentine cards, he said he wanted to make some for his family and friends.  I put dots down so he can trace his name and for the first time he made his own D.

He was beaming with pride because he did it.  In his own time and in his own way.

What has been your experience with kids doing this early or late?