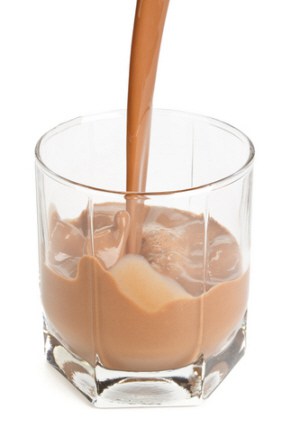 Just last week, a friend of mine stopped by and brought over some chocolate milk for my daughter (he works for Nestle). I’ve never offered Anna chocolate milk, as she is a huge fan of regular. Then, the next time I read the news, I found that chocolate milk may be on the chopping block at schools. This led to the National Dairy Council’s campaign, Raise Your Hand to Chocolate Milk.

I think I forgot chocolate milk existed until now.

Activists for the ban say that kids are already getting too much sugar and chocolate milk only adds to their sugar intake. Chef Ann Cooper, the “Renegade Lunch Lady,” announced that the extra 60 calories in chocolate milk can add up to 5 pounds in one 180-day school year. Most in this camp believe that if chocolate milk isn’t available, children will choose to drink regular milk or other calcium-rich foods.

Health professionals for chocolate milk in schools say that the extra sugar calories are worth the essential nutrients kids receive including calcium, vitamin D, and potassium (nutrients of public health significance) along with 6 other essential nutrients. They contend that some children just won’t drink milk if it’s not sweetened. And according to a recent report from the American Heart Association, there is no link between flavored milk and higher weights in children.

When I pull out the fat-free chocolate milk from Nesquik, I see that it has 60 extra calories and 16 grams of added sugar (about 3 teaspoons).

I’m not against sugar being used to enhance the taste of certain foods. I add some brown sugar to my oatmeal and buy cereals that are sweetened but also contain whole grains and fiber. But I’m always looking for products that hit the “sweet spot” of taste with the least amount of sugar.

The truth is I don’t really have a strong opinion on whether or not chocolate milk should be served in schools. And I think it has to do with my attitude about food. I don’t target specific foods as “bad” or the cause of obesity. Instead, I try to focus on the overall diet. And I’m also more concerned with the how of eating. But more on this in an upcoming post…

After searching this topic online, I found most parents want to keep chocolate milk in schools. What’s your take on it?