As parents, we are inundated with information about getting our kids to eat healthier. We understand there’s a childhood obesity epidemic and many of us have probably struggled with our own eating and weight to some degree.

But what we don’t hear much about is an extremely serious health issue that affects kids and adults across the globe: eating disorders.

With Eating Disorder Awareness Week fresh in our minds, it seemed the perfect time to begin my eating disorder prevention series. The articles in this series will include expert advice and revealing admissions from adults who struggled with eating disorders during adolescence. The goal is to provide you with the information you need to raise children who have a healthy relationship with food and their bodies.

But before getting into all the juicy details, there are some things you need to know first.

1) Eating disorders are not just anorexia and bulimia

If you haven’t personally dealt with eating disorders you might have some misconceptions. Maybe you associate disordered eating with the bone-thin guests who have been on talk shows like Oprah. Or you might think it is mostly a female disease, which it is not.

Anorexia nervosa: The inability to maintain a healthy body weight (85% lower than ideal), an intense fear of gaining weight, and a distorted view of the body (sees self as fat).

Bulimia nervosa: Defined as someone who binges twice or more weekly in a 3-month period and uses unhealthy practices such as vomiting and laxatives to lose weight.

Binge Eating: Consumes a large amount of food in a limited amount at least twice a week. Feels out of control during eating and shame and embarrassment after eating.

The following disordered eating patterns do not meet diagnostic criteria, but individuals who suffer from them can benefit greatly from receiving help:

Eating disorders not otherwise specified (EDNOS): An eating disorder that does not meet the exact criteria for either anorexia or bulimia but negatively affects the quality of life.

Orthorexia: When a person obsesses with eating only “healthy” or “pure” foods to the point where it interferes with daily activities.

Anorexia athletica: The use of excessive exercise to control weight typically found in individuals diagnosed with anorexia or bulimia.

Purging Disorder: Self-induced vomiting or other unhealthy compensatory behaviors in the absence of binge eating

Night-eating: Lack of appetite in the morning followed by consuming half or more of calorie intake after 8 pm.

2) All children are vulnerable to eating disorders

Below are some statistics that will give you an idea of how common — and detrimental — eating disorders are.

According to statistics compiled by The Alliance for Eating Disorder Awareness and the National Eating Disorders Association:
-Eating disorders affect up to 24 million Americans and 70 million individuals globally.
-At least 50,000 individuals will die as a consequence of an eating disorder.
-The rate of suicide for those with anorexia is 57 times higher than in the general population
-Males account for an estimated 10 to 15% of people who are diagnosed with anorexia or bulimia, however, the actual rates may be higher.
-90% of people with anorexia or bulimia are females between the ages of 12 and 25.
-Approximately 50% of those with binge eating disorder are male.
-It has been estimated that 11% of high school students have been diagnosed with an eating disorder.
-15% of young U.S. women who are not diagnosed with an eating disorder exhibit significant disordered eating attitudes and behaviors. One survey reported that as many as 65% of young women do so! (Self Magazine)
-The most common behavior that leads to an eating disorder is dieting and almost half of 9-11-year-olds are “sometimes” or “very often” on diets while over 80% of their family members are “sometimes” or “very often” on diets.

According to Sari Shepphird Ph.D., eating disorder specialist and author of 100 Questions and Answers About Anorexia Nervosa:
-The risk of death is greater with a low BMI than a high one.
-Up to twenty percent of people with anorexia will die as a result of the illness.
-Bulimia increases by 35% every 5 years.
-Teenage boys are the highest growth segment of individuals suffering from anorexia and bulimia.
-The most common eating disorder, EDNOS, is often never diagnosed and all forms of eating disorders are underdiagnosed and undertreated.
-Anorexia is the 3rd most common chronic illness in adolescents (behind obesity and asthma).

3) Parents have the ability to help prevent eating disorders

According to the National Eating Disorders Association, there are many causes of disordered eating including genetic, psychological (low self-esteem), interpersonal, social, and biological factors. But armed with the right information, parents can put “protective” factors in place. Each of these factors will be discussed in detail with each article in this series.

Shepphird says it is much better to prevent or catch, eating disorder symptoms before they get full-blown. By that time, only 50% of those treated will be completely cured and have no recurring symptoms. And the increased risk of death associated with eating disorders is something no parent wants to face.

When you look at the definitions in the first section, you probably can relate to at least one to some degree. These are extreme behaviors but many Americans have an unhealthy relationship with food. They feel guilty for eating food that tastes good, they are unhappy with their body shape, and, yes, they diet (I used to do these things too, still working on liking my post-baby body).

I want to help create a different world for my children. A place where food is enjoyed, diets don’t exist and health, not body size, is valued. As John Lennon put so eloquently: “You may say I’m a dreamer, but I’m not the only one.”

For more on how to help your daughter develop a healthy body image, check out Maryann’s book: My Body’s Superpower: The Girls’ Guide to Growing Up Healthy During Puberty. 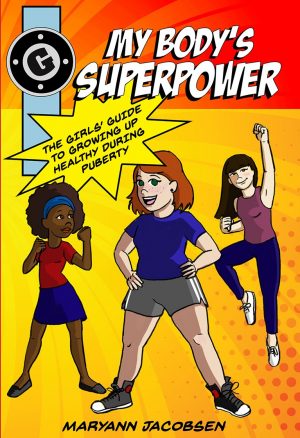