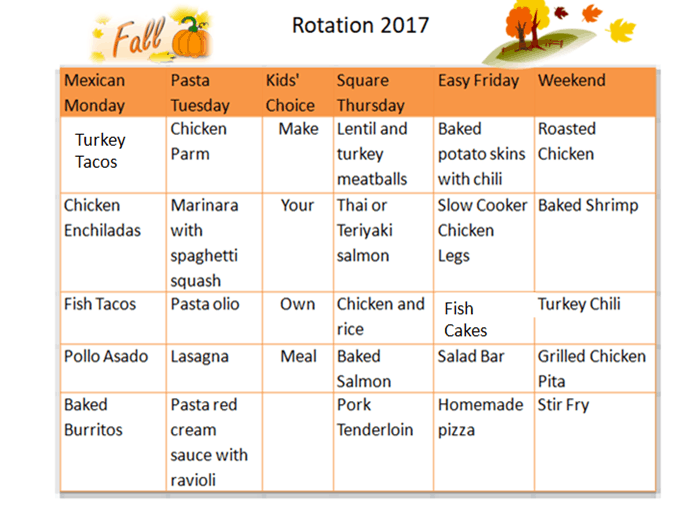 I’ve had this rotation going for a while and am just now getting to writing this. But it’s still fall!

We moved over the summer and it kind of derailed my cooking. It has taken a while for me to get back into the groove and lately I’ve been trying new things.

One meal that went over really well was Mom’s Kitchen Handbook’s Chicken Parm. This won my husband over which is not easy to do. The chicken was moist and I served it the marinara sauce and spaghetti separately and with a salad and broccolini on the side. This is the first time I roasted broccolini and it was so good. I used this simple recipe from Barefoot Contessa. 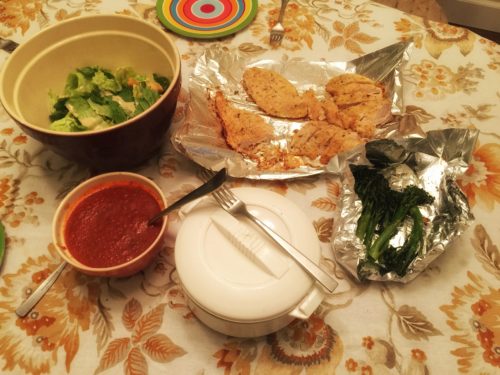 I also wanted a quicker thin crust pizza dough recipe and tried this recipe from the Kitchn . It turned out really well and no waiting around or sticking in the freezer. It even passed Big A’s need for crispiness. 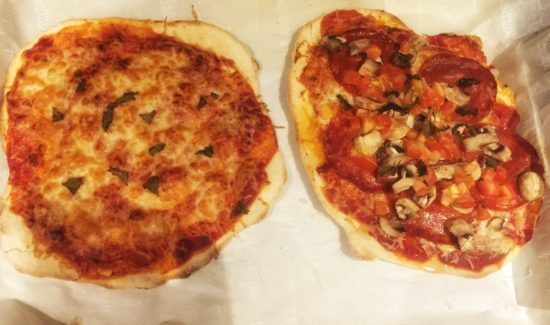 I’ve also tried mastering frittatas again. I know these are supposed to be easy but they never seem to turn out for me. So I followed this simple tutorial from the Kitchn and came up with the best one yet (the key is to season the veggies well). I’ve made this at least four times since then and just use up whatever veggies I have in the fridge. Great for Saturday or Sunday morning. 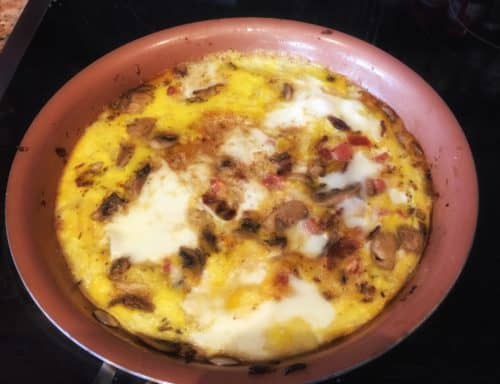 So that’s it for now. Got a new easy meal? Share it in the comments.

Get a bad night’s sleep!

At the end of the last school year, Little D developed allergies. He’d wake up with a stuffy nose and it disrupted his sleep. We finally got it taken care of but I noticed his good sleep never quite returned, and he’d wake up sometimes in the middle of the night.

Things took a turn for the worse when the school year started. Almost nightly he was waking up in the middle of the night and have trouble going to bed. I tried all my old tricks — move bedtime up, have bath time before bed, read a soothing book, cut off screens early, etc.

Nothing happened. In fact, it seemed to make things worse! (I should say he also has been scared too, but this seems more minor, but a factor for sure)

I realized that he was stressed about waking up and not sleeping well. So one night I explained to him that the worry about sleeping may be a factor in his sleep troubles. So I told him to try and have a bad night’s sleep that night.

He laughed and I told him what I meant: “There’s no pressure to sleep well, just do what you can and if it’s a bad night’s sleep you can always try again tomorrow.”

I said. “have a bad night’s sleep” a few more times and he laughed. But guess what? He slept soundly that night. It’s been about a week and he’s not waking up anymore and is even sleeping in later.

Pressure is a funny thing. First there’ s one problem and the pressure used to solve it ends up creating another problem. Remove the pressure and you can often fix the problem.

I’ve been busy with some website updates. I have over 8 years’ worth of content that I want to share with people as they join my newsletter. So I have organized the following series for people to get acquainted with my approach:

From Picky to Powerful Series: If you’ve got a picky eater you’ll want to check out this series that provides an overview of the research and practical tips. Start here with this first post in the series.

How to Raise a Mindful Eater Series: For any parent really, but especially helpful for parents dealing with big eaters or kids who are fixated on sweets. Start here with the first post.

What to Cook for Dinner Series: Great for parents struggling to get meals on the table and/or feeding family members with different preferences. Start here with the first post in the series.

Fearless Feeding Series: Read posts related to general feeding for kids of all ages. This was my first book and it was quite a ride. Start with this post.

I’m in the process of rebranding What to Cook for Dinner with Kids. When I came up with the title, I did so for SEO purposes. Well, that strategy didn’t quite work out and now I’m left with a book title that I feel is lacking. So I’m changing the title to The Family Dinner Solution and I’m making it more of a workbook (it will be larger and include room for writing/taking notes). That should be coming out in the next week or two.

I’ll leave you with a post I wrote for Huffington Post: The Powerful Question Every Parent Needs to Ask Their Child During Mealtime.

Have a great weekend!