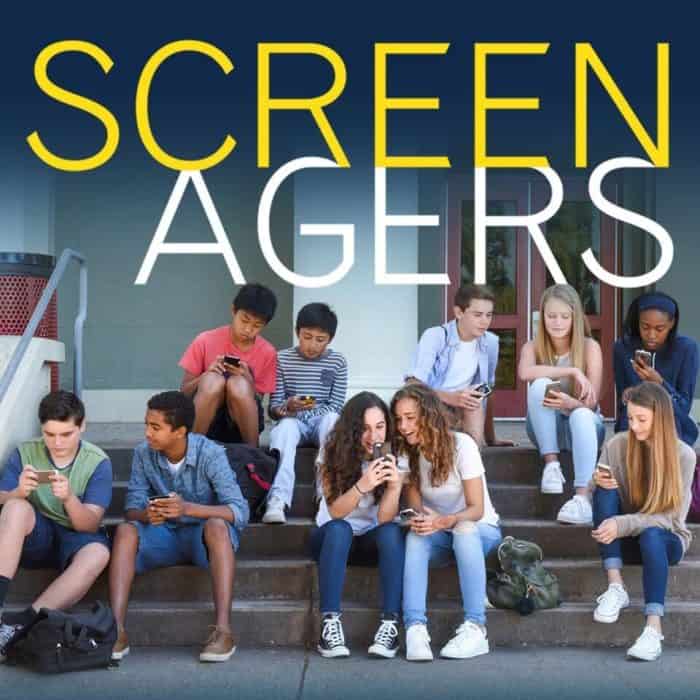 A friend of mine who doesn’t live near me mentioned she was going to see the documentary Screenagers with her 11-year-old son. Having not heard about it, I looked it up and was intrigued. Then, not too long after that my kids’ school alerted us to a screening nearby. I brought my 11-year-old daughter.

The story follows doctor, mom and filmmaker, Delany Ruston, on her journey to raising kids in the digital age. Her almost 13-year-old daughter wants a cell phone and her son is into video games. The movie highlights her struggles managing technology in the home. She interviews experts to find out how to proceed. The experts provide insight on the effects of technology on the growing brain, activity levels, well being, and socialization (or a lack thereof).

The documentary showcases the ways in which different families struggle. You see a young college student miss his classes to play video games until the wee hours. Then there’s the girl who sends pictures of herself on her phone to a boy and has to deal with the backlash. And one grandma is unsure what to do about her grandchild who spends his afternoons fixated on a screen instead of playing. It shows the variety of ways technology can be misused by kids. It also touches on school policies around cell phone use, and how they differ from school to school.

As a solution, Screenagers recommends an authoritative parenting style in which parents set limits but stay warm and responsive to their kids. Also, explaining why the rules exist, bringing kids into the decision-making process, and listening to kids’ views. Most of the issues presented get resolved and it helps to see how they play out.

The show ends by focusing on parents’ overuse of technology, especially their phone, and how managing screens should be a family affair. Ruston and her family decide to have “Tech Talk Tuesdays” at the dinner table to keep the conversation going.

I asked my daughter what she thought and she said while it made her more aware she thought it was a bit much for her age group (it’s recommended for kids 10 and older). She felt it only showed the negative sides of the argument. And she feels it will make kids who use technology feel bad about themselves.

When I went online to look at kids reviews it seemed many kids felt the same way.

“The movie continues this theme: parents are more important than kids and children have no say in anything.”

“…it focuses on the downsides of electronics and never positives. This is the movie’s main flaw, and is present enough in it to ruin the whole experience

“Overall it was extremely one sided and most of its arguments against technology can’t be taken seriously.”

“They make it sound like cooling off with a video game after school and homework is the worst crime a person could commit.”

Despite the kids’ reviews, I felt like Screenagers was decently balanced, although it did focus more on the negatives than the positives. It would be better if it pointed out the ways in which technology can enhance the lives of kids and parents. There’s a brief mention of some benefits to gaming and technology, but it kind of falls flat. And I don’t think kids respond well to fear-based messages.

Thanks to technology, there have never been more opportunities for self-directed learning and entrepreneurial pursuits. Did you know that MIT’s full curriculum is online? If kids are motivated, they can learn almost anything online. And odds are they are less likely to have traditional jobs like we had starting our careers. It is estimated that the number of solopreneurs will grow from about 30 million in 2014 to about 42 million in 2026.

So this movie is mostly about the watch-outs, and I think parents need to be aware of those. They need to teach these watch-outs to their kids and abide by them too. But let’s not make the mistake of painting technology as all negative or it will become the forbidden fruit. No, we also need to help kids take advantage of all the opportunities growing up in the digital age gives them. Like it or not, we all have (or will have) a screenager at some point. Let’s make the best of it.

I recommend watching this documentary because it will get a much-needed family conversation started. Find a screening of Screenagers in your area, or host one yourself. If you saw Screenagers let me know what you thought in the comments.