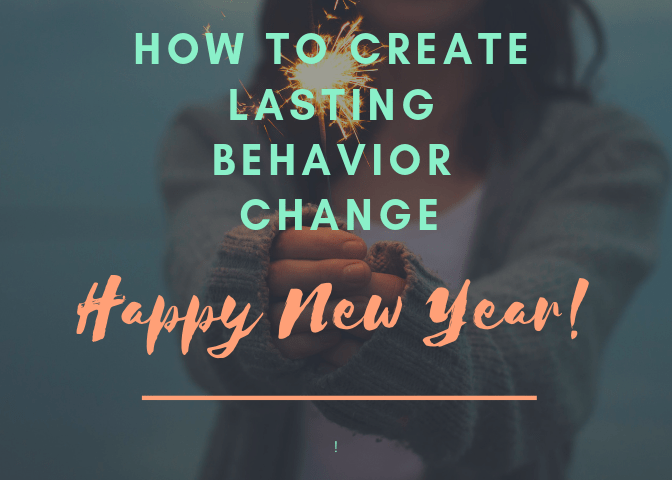 I was in the downward dog position when I realized what was happening. I was actually enjoying yoga. Then it occurred to me that this was the third time that week I was following along the DVD tape. Not only was it pleasant, but I was fitting it into it into my everyday life without much of a fuss.

After 5 years of starting, stopping and starting again, I was thrilled to have made the “mental shift” that makes lasting behavior change possible.

With a new year upon us, you probably are looking to add some healthy behaviors to your life. But how do you get to that place where you know the behavior is locked in for good? You first have to change how you change.

Five years ago after finally deciding to try yoga, my husband and I signed up for 2-weeks of unlimited classes at Yoga Works in Los Angeles. The only time we both could go was 6:30 am — and all of the classes were an hour and a half. Needless to say, this intense program turned me off to yoga for some time (and they were beginner classes!).

But I clearly wasn’t ready to go from doing nothing to daily, hour and a half yoga classes. Now I understand that starting small, and building on from there, let the desirable behavior evolve into something that works for my life. It wasn’t until I tried yoga at home for 15 minutes a day, that the habit started to take root.

2. Keep trying until you get it right

“Self-efficacy,” the strong belief people have in their ability to obtain a goal, is a term often used by health professionals. Because people trying to adopt a new behavior don’t have much confidence in their ability (yet) they tend to lack self-efficacy. So when they hit a roadblock, they easily give up saying, “I’m just not good at this.”

Knowing this can help you a great deal. Instead of giving up, do what someone with self-efficacy would do: change strategies. And keep trying and adjusting until you see some progress. And then tweak it some more. This process of trial and error — and getting better at the desired behavior — will do wonders for your self-efficacy.

One of the reasons yoga has been difficult for me is because I was always telling myself I “should” do it. I’ve never been flexible but understood the important health benefits of flexibility. I also knew that yoga would help calm my over-active mind. Everywhere I turned someone new was telling me “you should do yoga.”

But the “shoulds” rarely motivate anyone to do anything. It wasn’t until I found my own reasons for doing yoga that I actively looked for ways to include it in my routine. You can get to this place early in the process by asking yourself what you want to get out of the new behavior. As you work on making the behavior a habit, focus on how it improves the quality of your life.

See How to Go from Willpower to Wantpower

4. Watch out for unrealistic expectations

In the late nineties, researchers asked a group of women (all about 217 pounds) who wanted to lose weight their goal weight – separating them into categories such as “dream weight” and “disappointed weight.” Most women’s goal weight was a 69- pound loss, getting down to 148 pounds. After 48 weeks of treatment, almost 50 percent didn’t even reach their “disappointed weight” and lost 35 pounds (getting down to 182 pounds).

Psychologists call unrealistic expectations for change “false hope syndrome”– and it’s a key reason people throw in the towel. But here’s the kicker: no one knows for sure where their new endeavors will take them. By stating it all up front, you kill the chance of finding your own way. The way that allows for the crucial “mental shift” that locks in the new habit for good.

What key mental shifts (and behaviors) would you like to finally make this New Year?