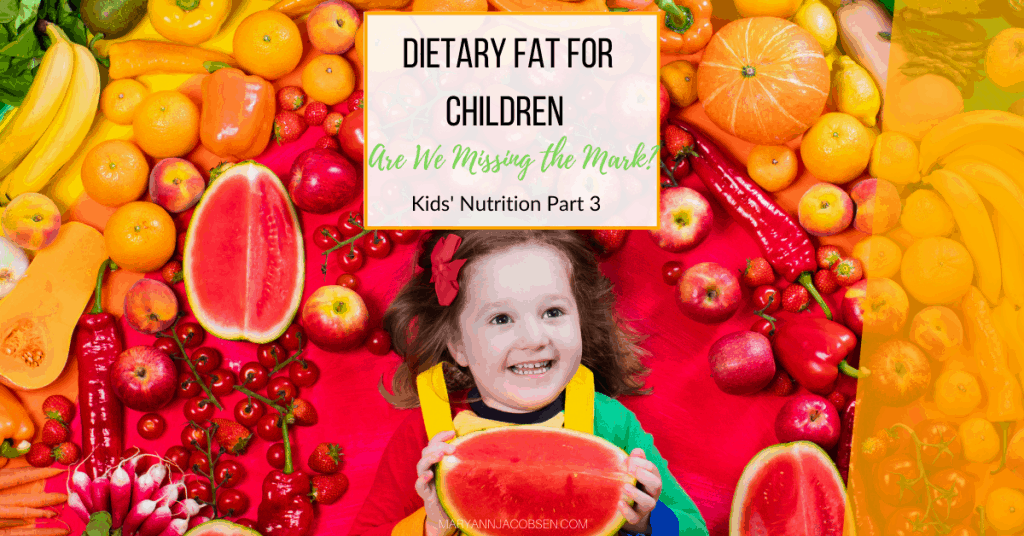 This is Part 3 of my Kids’ Nutrition Series

Joan’s 2-year old boy was hungry all the time. She fed him every hour and he constantly asked for food. When I asked her what she was feeding him she revealed a diet consisting mostly of fruits and vegetables, grains, some protein, and very little dietary fat. Once she filled out his diet with more fat and protein, his hunger calmed down.

Why? He was finally getting the calories and filling foods his growing body needed.

In a world where healthy eating is pressed at a very early age, parents need reminding that a “healthy” diet for kids is different than one for adults. And this especially holds true when it comes to dietary fat for children.

In part 3 of our Kids’ Nutrition Series, we’re talking about fat’s role in kids’ diets and how you can make sure your child is getting enough — and the right types — of fat.

Fat is an essential part of a well-balanced diet. It has the advantage of carrying more energy for a smaller volume supplying twice as many calories (9 calories/gram) as protein or carbohydrates. This is why children under two require more fat — they have tiny stomachs but extraordinary energy needs. Breast milk and formula contain anywhere from 40 to 55% energy as fat.

Fat and cholesterol are “building blocks” for structural elements of cellular membranes — the brain and other neural tissues are rich in structural lipids. Essential fatty acids are instrumental in the maturing central nervous system including visual development and intelligence. And fat is necessary for the absorption and transfer of fat-soluble vitamins including vitamins A, D, E, and K.

Considering that the brain is still developing at 5 years of age (90% developed) and a child’s body continues to grow at all stages of development, fat is a critical part of any child’s diet.

Did you know that essential fatty acids can’t be made by the body so they need to be consumed in the diet? They include omega-6 (linoleic acid — LA) and omega 3 fatty acids (Alpha-linolenic acid — ALA) found in breast milk, formula, vegetable oils, and nuts. Although longer chained omega 3s (DHA and EPA) found in fish can be made from ALA in the body, experts believe this is limited. For more on the importance of DHA and EPA for kids see this post.

“Fat in the diets of children is really important,” says Dr. Penny Kris-Etherton, Ph.D., RD, Distinguished Professor of Nutrition at The Pennsylvania State University. “Some parents think that fat is bad and end up restricting it too much.”

Take a 1989 study published in the American Journal of Diseases in Children. Eight children who suffered from high cholesterol were given very low-fat diets without medical supervision. Three of the children had nutritional dwarfing and five had weight loss or inadequate weight gain. The diets of children with dwarfing were the lowest in calories, fat, and micronutrients.

But there’s another reason children need fat — their bodies may utilize it as a fuel source more so than adults.

According to a 2007 study led by Kris-Etherton, pre-pubescent children oxidize fat at higher rates than adults. The researchers measured metabolic rate to calculate how much fat adults and children oxidized — and calorie for calorie the children burned more.

It is hypothesized that children’s bodies oxidize fat at higher rates to support normal growth processes such as higher rates of protein synthesis.
“There are periods when kids have growth spurts,” said Kris-Etherton. “They need an adequate amount of fat which is energy-dense.”

Quick tip! If your child appears hungry all the time check the amount of fat in his or her diet. Children (and adults) on very low-fat diets tend to eat more refined carbohydrates which aren’t as filling. Fat increases satiety by delaying gastric (stomach) emptying of food. Worried about weight? A recent study showed that kids who switched to low-fat products ate more food to make up for it.

How much fat is enough?

Before we start attacking all who recommend low-fat diets, it is important to understand that a low-fat diet is not the same as a no-fat diet. In general, a low-fat diet is considered 30% or less of calories, which for a 2000 calorie diet is about 66g per day or less.

The answer is not to go to the other extreme but make sure that kids have a diet balanced with a moderate intake of fat for growth, development, and meal satisfaction. The Institute of Medicine’s Acceptable Macronutrient Distribution Ranges (AMDR) is below. You can gradually lower the fat in your child’s diet as they age while making sure they have a consistent intake of fat.

The goal is not to count fat grams, or even to limit total fat, which has not been shown to be beneficial for health, but to include quality fat sources as a sensible (and tasty) part of meals. Here are some tips to help:

While fat is the target of much controversy, it continues to be an important part of a well-balanced diet. The bottom line: very low-fat diets are not for kids whose bodies need the calories, nutrition, and satisfaction factor on a daily basis.

How do handle fat in your child’s diet?