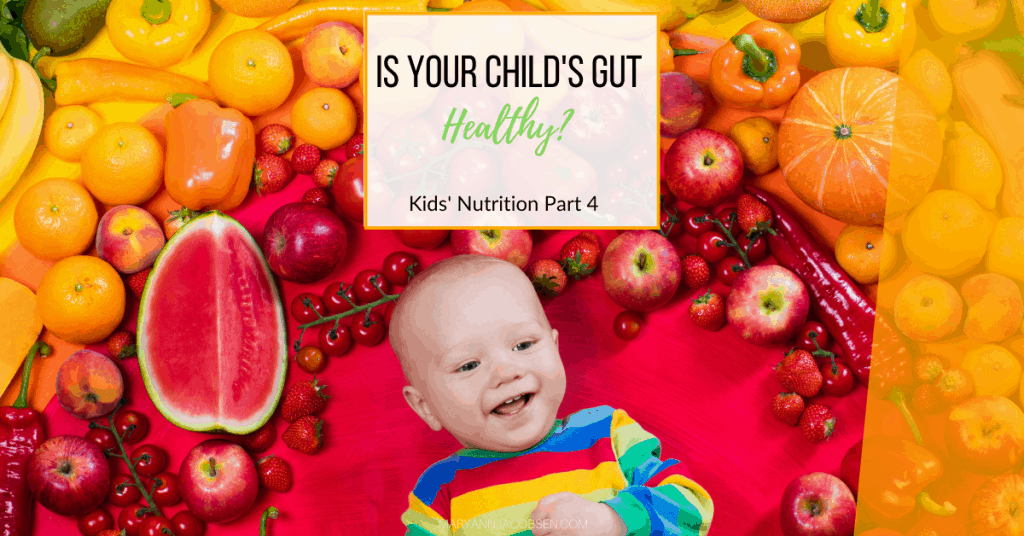 This is Part 4 of my Kids’ Nutrition Series

So far in our Kids’ Nutrition Series, we’ve covered nutrients kids may be missing and getting too much of as well as why fat is an important part of their diet. Now we are moving on to a more complex topic — one that is growing in popularity but poorly understood: gut health.

The gut consists of digestion and absorption of nutrients, immune function, and the elimination of wastes. It’s the first line of defense for the body, and acts as a protective barrier, as potential toxins and harmful bacteria are ingested. It plays a larger role in the immune system than most people realize, and in different ways than expected.

I want to clear up the confusion about gut health for you and your family. And in order to do so, we must start with a quick review of the good and bad bacteria that reside in the gastrointestinal (GI) tract.

A major component of a healthy GI tract is the presence of microbes (bacteria) that take up residence. These microbes can be found to a lesser extent in the stomach and upper part of the small intestine but as you move to the lower small intestine their numbers increase (1,000,000) with the most in the colon (1,000,000,000,000). It has been estimated that there are more than 400 different species of bacteria in the gut alone!

The microbes that reside in the GI tract can have positive, negative, or neutral health effects. It is beneficial, according to research, for the GI tract to contain more favorable microbes such as Lactobacilli, Bifidobacteria, and Streptococcus than unfavorable ones such as Clostridia, Bacteroides, E. Coli, toxins, and cancer metabolites.

This is where the term “probiotics” comes into play — taking in beneficial bacteria helps “crowd out” the not-so-helpful fellows. And certain types of fiber (prebiotics) are also beneficial as they provide fuel for healthy microbes to grow.

Quick Definitions!
Probiotics are live microorganisms that, when consumed in adequate amounts, confer a health benefit on the host.
Prebiotics are nondigestible food ingredients that stimulate the growth and activity of beneficial bacteria in the colon. In other words, they are fuel for good bacteria.
Synbiotics are food products that contain both pre and probiotics.
Microbiotica is referred to an individual’s unique set of gut microbes.

In the womb, fetuses have very little exposure to bacteria — and when babies are born their GI tract is considered sterile. The baby’s first exposure is when they make their way down the birth canal and are initially colonized with the mother’s bacteria. After birth, kisses, holding, and feeding mean more bacteria are transferred to little ones.

It is known that breastfed infants have different microbiotica than formula-fed infants including more Bifidobacteria and Lactobacilli, which have beneficial effects on the immune system and intestinal function. One key reason is human milk contains oligosaccharides (prebiotic), which fuel the growth of good bacteria (bifidobacteria).

“Most people don’t realize there are probiotics in our guts naturally,” said Jo Ann Tatum Hattner, MPH, RD author of Gut Insight: Probiotics and Prebiotics for Digestive Health and Well Being. “The baby that is vaginally birthed and breastfed has the healthiest gut.”

Hattner goes on to explain how the first two years of life are vital for producing what researchers refer to as The Microbiota Finger Print, explained in this excerpt from her book:

As you grew, you were exposed to more bacteria and by about your second birthday, you developed an identifiable population of microorganisms in your gut known as your microbiota. Some researchers refer to this resident population as your microbiota fingerprint as they believe it is an individual pattern which defines you for a lifetime. Researchers theorize that both genetics and the environment contribute to the fingerprint’s makeup.

Guilt Alert! Don’t berate yourself if you weren’t able to have a vaginal birth or breastfeed, as these things don’t always work out. But if you have the chance, try your best for both of these goals — that’s all a mom can do. Read on for more you can do to maximize your child’s gut health NOW.

In children and adults, the body works to keep the microbiotica fingerprint although certain circumstances such as infections, antibiotic use, pathogens ingested from food, and poor diet can have negative effects. One way to enhance a child’s GI tract with more beneficial bacteria is the daily consumption of prebiotics and probiotics in food.

In her book, Hattner discusses how probiotic microorganisms stimulate the immune system and increase the acidity of the gut so undesirable bacteria can’t grow. Research also demonstrates that probiotics can improve in lactose digestion, diarrhea in infants, constipation, tolerance to antibiotic therapy and reduce symptoms of respiratory infections.

Probiotic foods available include yogurt (soy yogurts are also available) and specialty yogurts such as Dannon Activia, DanActive, and Yoplait Yo Plus, smoothies such as flavored drinkable dairy yogurts (both regular and light varieties) and soy probiotic drinks. Kefir, a cultured milk, can be bought plain or flavored (there is also Kefir soy). Yakult, a cultured dairy drink, contains a proprietary bacterial strain, Lactobacillus casei Shirota. Other non-dairy sources include probiotic wellness bars includingAttune bars.

Hattner suggests being creative at meals such as mixing Kefir with orange juice (this is really good!!), making yogurt a regular fixture at meals like breakfast, using yogurt as a base in dips like ranch, and trying some of the flavored specialty drinks. 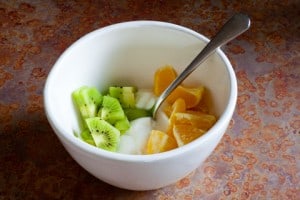 But when happens when the GI tract goes awry with food allergies, constipation or antibiotic associated diarrhea? Hattner says most of the research for food allergies points to prevention — doing what you can to strengthen the gut in the early years — with studies mixed on the treatment of food allergies with probiotics. And giving a probiotic supplement when kids receive antibiotics makes sense, as antibiotics kill bad and good bacteria in the gut.

Hattner says when it comes to supplements: “discuss with a physician as too much may have GI symptoms such as gas and bloating.” And according to US Probiotics.org, make sure any probiotic supplement you are taking has research behind it. Without research, you have no way of knowing if a supplement has enough, or the right microbe strain (there are 400, remember!), to treat the GI side effect you or a family member may be experiencing.

Looking for a probiotic supplement? Hattner relates two with the best research behind them: Culturelle and Florastor. Most supplements contain Lactobacillus or Bifidobacterium although other strains are sometimes used. Look for the research!

The Proof is in the Poo

Still not sure your child’s gut is healthy? There’s one way to tell: analyze his or her bowel movements. This may not be realistic with older kids but when they are younger parents have ample opportunity.

In Hattner’s book, she explains that daily bowel movements are ideal although every two to three days is okay if the stool is soft and there is complete evacuation Model stool is bulky, soft, and easy to pass with a uniform shape (torpedo-like). Too hard (pebbles or many pieces) or liquid stool is not good.

So there you have it — simple ways to improve your family’s gut health. Any comments, questions, or concerns?