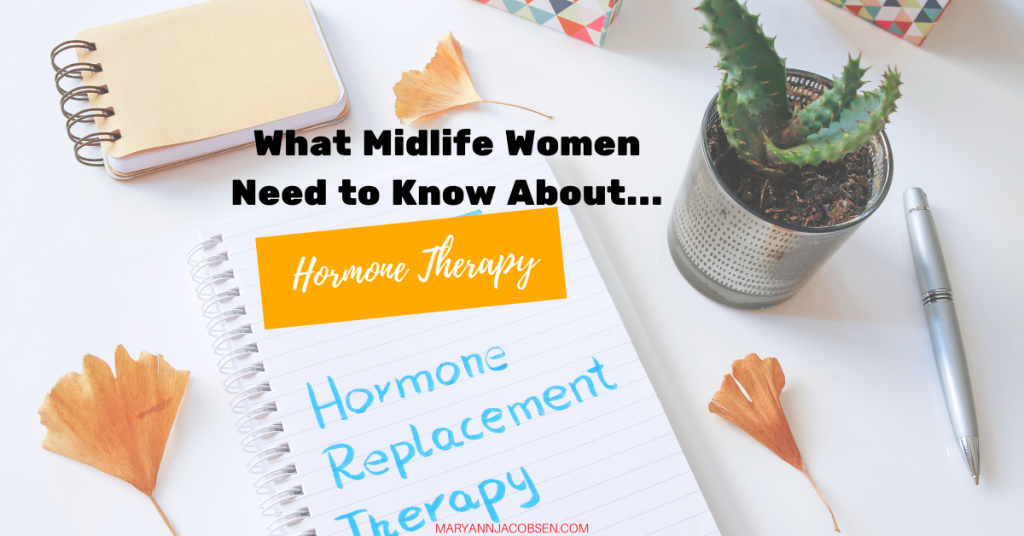 Say “hormone therapy” and many different images might come to mind. Maybe it’s breast cancer, Suzanne Sommers, or scary pills and patches. I’ll admit that before I started researching hormone therapy, I had a negative view of it.

But as I’ve learned more, I am surprised about how little I –and the midlife women I know–understand it.

Today, I’m sharing what I’ve learned about hormone therapy that every woman needs to know. Along with reading studies, I also read The Estrogen Window and interviewed Dr. Mache Seibel for the podcast.

A Brief History of Hormone Therapy

Before the 20th century, menopause was considered a medical crisis that increased the risk of disease. Treatments for symptoms showed up as early as 1899, which included a brown powder derived from cow ovaries called Ovarian. This product continued to be offered to women until 1932 when oral estrogen was first introduced.

The first estrogen was derived from human pregnancy urine and called conjugated estriol. In the late 1930s, conjugated equine estrogen (Premarin) taken from the urine of pregnant mares replaced it.

In May of 1942, the FDA allowed Wyeth-Ayerst to market Premarin for the treatment of menopause symptoms. As the years passed, estrogen became more and more popular in the 1950s, and use tripled by the 1970s.

Estrogen received its first bad hit when reports started circulating that it caused endometrial cancer. And by April 1978, every estrogen package required a warning label. Soon evidence revealed that by adding a progestin (synthetic progesterone), estrogen-induced endometrial changes could be prevented.

Use of estrogen — and progestin — increased in the 80s and 90s. Along the way, it was found that estrogen helped prevent osteoporosis in addition to treating menopausal symptoms like hot flashes.

During this time, it was also believed that hormone therapy reduced the risk of heart disease. After a landmark meta-analysis in 1992, the American College of Physicians published a position stand statement recommending all postmenopausal women be offered hormone therapy to help prevent heart disease.

Other organizations followed suit. Most studies up to 1997 showed estrogen helped prevent heart disease. Then studies began using hormones for women with established heart disease and some showed no benefit while others suggested harm. 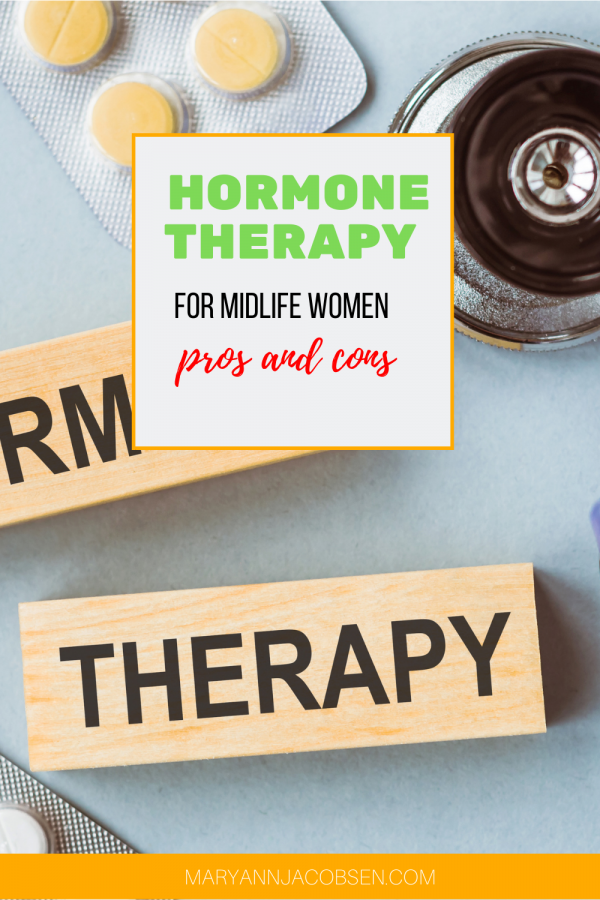 The Study that Changed Everything

In the early 1990s, The Women’s Health Initiative (WHI) trial was created to examine menopausal hormone therapy’s effect on the prevention of chronic disease. In the clinical trial,16,608 women with a uterus received either estrogen and progestin (Prempro) or a placebo. In another group, women without a uterus, 10,739 received either estrogen alone (Premarin) or a placebo.

Prempro was the popular estrogen plus progestin given at the time and included conjugated equine estrogen (CEE) and medroxyprogesterone acetate (MPA). Premarin is estrogen without progestin.

Women who do not have a uterus can take estrogen alone. But women with a uterus need progesterone to protect the uterine lining from hyperplasia which can lead to endometrial cancer.

On July 8, 2002,  about 5 years after the study began, it was stopped early due to adverse effects — the link between Prempro and increased risk of heart attack, stroke and clotting, and breast cancer.

Headlines like the New York Times, “Hormone Replacement Study A Shock to the Medical System,” were everywhere. To say this caused panic is an understatement.

“The number of women taking hormone therapy today is 80% less than it was in 2002 mostly out of fear and misinformation,” said Dr. Seibel. “Think about what that does to the medical community…that means that the doctors in training over the last 20 years or so have had 80% fewer patients in menopause and less experience in hormone therapy.”

Hormone therapy isn’t right for everyone. According to The North American Menopause Society (NAMS) contraindications for hormone therapy include unexplained vaginal bleeding, liver disease, history of deep venous thrombosis or pulmonary embolism, clotting disorder, untreated hypertension, history of breast or other estrogen-dependent tumors, history of heart disease, and women with one more first-degree relatives with breast cancer may want to consider non-hormonal therapy

Re-examination of the Data

After the dust settled from the study, researchers began to look closely at the data. Age is a key factor that was teased out.

“Years later when they took the same study but lined it up for age, they found that women who take hormones and start between the ages of 50-59 actually don’t have any increased risks and in some instances have fewer risks than the women who don’t take hormones,” said Seibel. “That poor design has impacted a generation of women and really caused a terrible setback in women’s health.”

In The New England Journal of Medicine (2016) Manson and Kunitz, researchers involved in the 2002 WHI study, write about how the results of the study have been misconstrued:

The WHI trial was designed to address the risks and benefits of long-term use of hormone therapy for the prevention of chronic disease in postmenopausal women who were on average 63 years of age at initiation of therapy (both of us serve as investigators and one of us [J.E.M.] as a Steering Committee member). But its results are now being used inappropriately in making decisions about treatment for women in their 40s and 50s who have distressing vasomotor symptoms.

Other organizations like the North American Menopause Society, Endocrine Society, and the American College of Obstetricians and Gynecologists support the use of hormonal therapy in symptomatic midlife women, stating that in younger women without contraindications (10 years from menopause) the benefits outweigh the risks.

In his book, Seibel refers to the 10 years after menopause that confer the most benefits and have the least risks as a woman’s Estrogen Window. Researchers now call it the “timing hypothesis.”

The No Brainers
According to the 2017 NAMS position statement, women with early menopause (before 48) or those who go through surgical menopause due to hysterectomy or another surgery that induces early menopause are at higher risk for bone loss, heart disease, dementia, and other chronic disease and benefit from taking estrogen until the natural age of menopause (52). Additionally, more than 40% of women post-menopause have vaginal atrophy and research shows a small amount of vaginal estrogen relieves symptoms. So far, research shows vaginal estrogen is not associated with any of the risks of menopausal therapy.

The reluctance of women to take traditional hormone therapy left the door wide open for alternatives. This is when bioidentical hormones became popular, also called bio-identical hormonal therapy (BHT). Proponents say that it’s safer because the hormone’s structure is the same as what’s made in the body.

“All I’m saying is that you can get bio-identical hormones…the same exact estrogens but they are FDA approved,” he adds.

What seems safest at this point is bio-identical estrogen (17 beta-estradiol) offered as a patch, gel, or spray and micronized progesterone over synthetic progestins.

“In general the studies are showing that estrogen is taken through the skin, that doesn’t go through the mouth or digestive tract, has a slightly lower risk of blood clots,” said Seibel. In our interview, he also said lower levels of estrogen by mouth decrease this risk too.

And progestins, like MPA used in the WHI study, are associated with an increased risk of breast cancer. Yet the bio-identical micronized progesterone has a better health profile, although longer-term studies are needed. Another option is to use a progestin IUD which results in little absorption while protecting the uterine lining and providing contraception.

In short, there are many options for women who experience menopausal symptoms. The following chart lists the potential benefits and drawbacks of hormone therapy. Additionally, micronized progesterone by itself may be helpful during perimenopause and menopause. It’s also important to note that Estrogen alone (for women without a uterus) has been found to confer less of a risk in studies like the 2002 WHI. 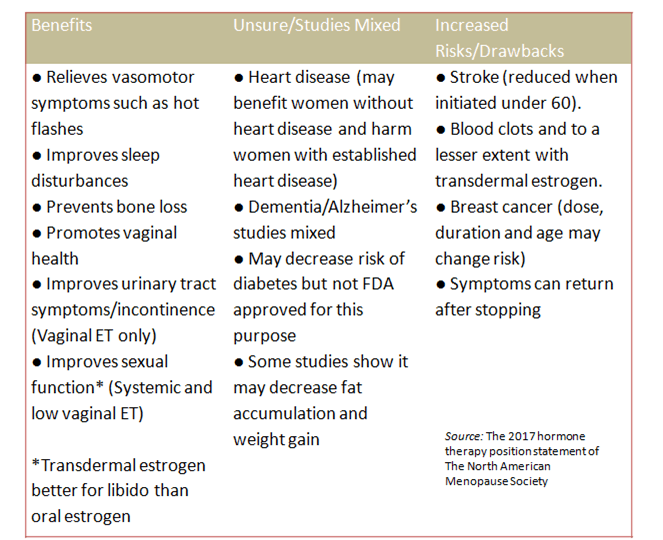 Hormone Therapy as an Option

I’m not for or against hormonal therapy. I now realize it’s a viable option women have to help them through the changes of perimenopause and menopause.

“If you choose not to take hormones then you need to have a discussion with your provider to deal with the noisy symptoms that will get your attention,’ adds Seibel. “But also the silent symptoms (i.e., loss of bone) that you’re not aware of.”

Women with menopausal symptoms don’t have to grin and bear it. Research even suggests severe symptoms like hot flashes may be linked with a higher risk of cardiovascular disease. The key is to get a good doctor, be informed, and discuss your options. I’ll be posting on non-hormonal treatments to consider as well.

Have you tried or considered hormone therapy?