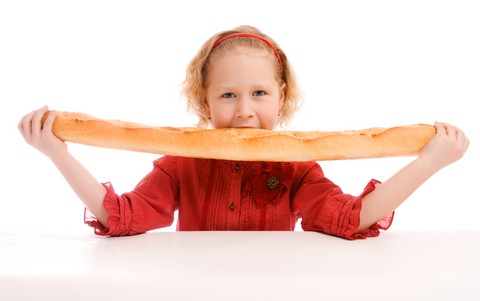 Big A, who is 4 years old, prefers carbohydrate-rich foods to anything else. Check out exhibit A: the hamburger. 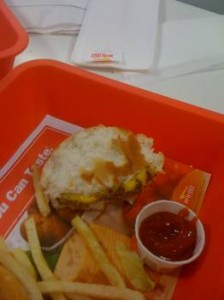 As the picture shows, she picks at the bread part and rarely eats the meat (I think the bite taken out of it was my husband’s!). One time she actually put meat in her mouth but it came right out.

The funny thing? When you ask if she wants a hamburger (hangerbur to her), she always says yes. In fact, she often says that she loves them.

Now check out exhibit B: the Quesadilla. 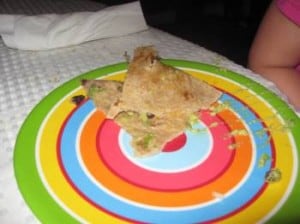 While she sometimes eats the beans and cheese inside, she often picks at just the tortilla. (Actually, I started making quesadillas in addition to burritos so it’d be harder for her to take apart — but she found a way!). And guess what she does with pizza? Eats the crust only.

At her birthday party a friend came up to me asking, somewhat concerned, “Does Anna like pizza?” I told her, “she ate some — look,” as I hold up a crust-eaten piece.

Is Big A doing this just to push my buttons? I don’t make an issue out of it, so I don’t think so. By calling attention to something like this we end up enforcing the behavior we don’t want. Truth be told, Big A doesn’t know she’s picky.

Carb-rich foods like bread and tortillas are easy for young kids to like. They are still energy-rich and don’t overwhelm the taste buds. Their texture is also very consistent — which is why some kids only eat the bread when faced with a new or different meal. As Big A slowly gets out of her fear of food stage, she will eat more and more of these foods. For more on this normal part of development, see this article.

If I make a big deal and make Big A eat the meat/beans part of the meal, she may come to dislike it. And as of now, she loves quesadillas, hamburgers, burritos and other protein foods like salmon. This is part of her learning process. I’m excited because Anna has a new-found interest in spinach and wants it on her plate when we have it for salad. “I love spinach” she says. But she rarely takes a bite.

As parents we have to be able to see the process of learning about foods unfold in front of us. I admit that at least for Big A, this process is much, much slower that I’d like it to be. And no doubt it’s frustrating. Some days I see huge leaps, other days regression, but mostly it’s itsy, bitsy steps like her showing interest in a new food.

Since right before Big A turned 4, this no protein thing has intensified. So yes, I worry about her getting enough key nutrients from protein-rich foods like iron and zinc. She will eat eggs (French toast), is a huge milk drinker, cheese, meatballs and beans (those last two are sometimes foods) and she has been seen taking a bite of a turkey sandwich. I also have a multivitamin with iron that I give her on days she doesn’t eat iron-fortified foods or much iron-rich foods. We’ll talk more about this in my Kids’ Nutrition Series.

Can I do anything?

I think the toughest part of the Division of Responsibility is that parents feel like they aren’t doing anything. And if there is one thing I’ve learned about feeding kids — not interfering with your kids eating is very, very hard. I often encourage Big A to try everything and leave it at that, then we talk about other things. When she says she’s done I ask her what her tummy says and let her know when the next meal is, then I accept the answer.

We talk about eating (and trying) a variety of food at non-mealtimes. And I engage her in the process of food from helping me choose food at the grocery store to preparing meals.  And even though she’s not eating the variety of food I would like, she has a positive outlook on a variety of food — a precursor to actually eating that way. And she does a great job of regulating her food intake. A small dinner is often followed by a bigger breakfast and vice versa.

So tell me, am I the only one? Any carb queens or kings out there? Or should I say princesses and princes? Are you able to see the small steps your child makes in learning to like new foods?

What to Cook for Dinner with Kids: How to Simplify, Strategize, and Stop Agonizing Over Family Meals