This is Part 4 of my From Picky to Powerful Series

In a previous post on picky eating, I detail the common pitfalls of feeding picky eaters.  But today I want to focus on the small, less talked about things parents can do.  Actually, they may seem small but to a child, they are quite significant in ways most parents probably never think about.

So this post touches on the little things that can make a big difference in how children eat and behave at the family table.

When a picky eater feels his eating is contingent on feeling accepted, it can do a number not only to his feelings of self-worth but to his relationship with his parents and food.  Coming to the table is no longer about getting nourished, it’s about feeling accepted by the most important people in your life, and that sure is a lot of pressure.

“I grew up an extremely picky eater, I didn’t like being picky, it made a lot of social situations very difficult,” says Kia Roberston from Today I Ate a Rainbow.” I’m sure it would be very challenging for a parent that has never been picky to “deal” with a picky eater but when you can take a compassionate approach and see eating from a child’s point of view I think it helps to give parents more patience and understanding.”

Acceptance doesn’t mean giving up.  It means creating a supportive environment where a child feels accepted and loved no matter how they eat.

In Fearless Feeding, we estimate that parents will feed their children about 28,000 times before they reach adulthood and leave the house.  As kids get older, mealtime may be the only time parents get to connect with kids.  If these meals are tense or all about how or what a child eats, an important connection gets lost.

So instead of focusing on what your child is eating, take the time to enjoy quality time with her. 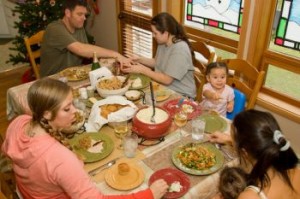 Joey was eating much better, trying more foods, but then he had a week where it all stopped.  His parents panicked and started quizzing him as to why he was no longer being adventurous.  This put a strain on his eating because it was now something he knew his parents expected.

Kids’ eating, at any age, can take unexpected turns and dips, as I explain in this post.  When we make a big deal out of regressions, they last longer.  Instead, work to find out why the regression is occurring, and make changes under the radar.

Let’s face it, kids like attention, both negative and positive.  The key is to focus less on the behaviors we don’t want and more on the ones we do want.

So when little Kate says how “gross” a food is, remind her to simply say “no thank you.”  If a kid doesn’t want to eat, that’s fine, but let them know they need to come to the table.  Just don’t engage in the you-have-to-eat battle.

5) Remember the upside of No

No parent likes when their child refuses to eat something they took time to make, but as this 2004 piece in The Permanente Journal points out, there’s an upside to a child saying “no” to food that extends to other areas of a child’s life:

“…By accepting their children’s refusal to eat a particular food at a particular time or their lack of a big appetite at a particular meal, parents send the message not only that using No is okay in this family but also that you can use No and still be loved in this family. This method of parenting is powerful because it builds within children a deeper sense of connection with their parents as well as internal beliefs that differ from those of children whose No is ignored or overridden. A child whose parents accept No will later be much more likely to feel comfortable saying No to something that is not good for the child.”

It’s like anything in life: the more you focus on the outcome, the more elusive it becomes. But when you step back and learn to enjoy and trust in the process, the outcome eventually comes in its own time. And best of all, parent and child are more in sync.

If you have a picky eater, which of these changes has been the hardest for you to make?

Posts Included in the Series:
1. What to do When Picky Eating Doesn’t Get Better (Intro)
2. The Most Overlooked Reasons Kids Stay Picky Eaters
3. How to Tell if Picky Eating is Normal, or Not
4. How to Tell if Pressure is the Culprit
5. Five Small Changes that Can Make Picky Eating Much Better
6. The 10 Golden Rules for Exposing Kids to Food [Next]
7. Introducing my New Book: From Picky to Powerful

Want this entire picky-eating series plus new content, research, and stories? Get my book From Picky to Powerful