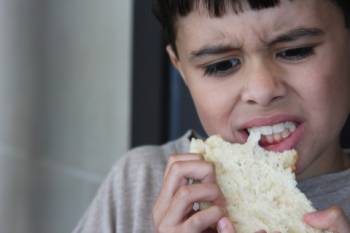 Expert Profile: Diane Keddy, MS, RD, FAED is a Nutrition Therapist and a Fellow of the Academy for Eating Disorders. She has treated men, women and children with eating disorders, including selective eating, for the past 25 years. Currently she is in private practice in Newport Beach, CA.

See an updated post on getting picky eater help: The Nagging Question Every Parent of a Picky Eater Asks

If all children accepted the food parents gave them, feeding kids would be easy. In fact, this is usually what happens the first 18 months to 2 years of a child’s life.

But then one day the same child who ate almost everything starts to say “no” and reject foods. In the eyes of a child, new foods can be scary and intimidating. And parents are left unsure what to do, afraid their little one will become deficient in key nutrients.

Welcome to Raise Healthy Eaters’ picky eating series. Here we’ll talk about why kids eat the way they do and what parents can do about it. I believe what happens during this lengthy stage of development can have a big impact on a child’s future eating.

But before we get into what is normal for most kids in terms of food choice and eating habits, it’s vital to discuss what isn’t normal. There are times when kids may require professional help if they are to become normal eaters.

What is selective eating?

Selective eating is picky eating that persists into middle childhood and beyond with an extreme reluctance to try new foods. Unlike eating disorders, there are no body shape issues and weight of the child can vary, with many children being underweight.

“Most pediatricians are missing it,” says Diane Keddy, MS, RD , FAED, a nutrition therapist who has worked with selective eaters for 10 years. “The longer parents wait to get help, the harder it is to treat.”

Now this doesn’t mean that any 10-year old picky eater has selective eating. Keddy says these kids only accept a very narrow range of (usually white) food. The typical list includes pasta, macaroni and cheese and gold fish and some will drink milk.

Selective eaters tend to only eat their accepted foods at home even if someone else is making it the exact same way. When they try a new food it’s common for them to choke, gag or even vomit which leads to their anxiety about eating. Keddy explains that this is neurological because the part of their brain that recognizes food as pleasure is underdeveloped.

Typically by age 6 kids really start expanding their palate but with selective eating this doesn’t happen, making social activities anxiety-ridden for the child. They often fall off the growth charts and can experience slow bone growth if left untreated.

A recent study published in the Journal of Pediatrics, showed that while both ASD and non ASD children had picky eating, the ASD group refused more foods and had a smaller repertoire of foods they would eat. As a result, these children had insufficient intakes of vitamins A, C, D, zinc and calcium.

This doesn’t mean non ASD children can’t become selective eaters, but it appears to be more common in children with ASD.

The treatment for selective eating

Keddy says that the treatment for selective eating is very different than what she recommends for normal picky-eating kids. The division of responsibility of feeding does not work with selective eaters. She utilizes a treatment called “systematic desensitization.”

Children are first put on medication to treat their anxiety. Once their anxiety is reduced and they are better able to relax, she works with them on trying different foods. For each new food they try, the parents give them some kind of non-food reward.

She describes it as a negotiation, where kids are allowed so many “pass” foods. She says the treatment takes a lot of energy and commitment from parents, but it’s worth it. Based on her own experience, she estimates that about 80% of selective eaters eventually become normal eaters.

What worried parents should do

“Parents know their kids best,” Keddy says. “If they sense something is wrong, they should seek professional help.”

Keddy says to start with the pediatrician and if they can’t refer you to anyone, find a dietitian that works with eating disorders. She says that even if the pediatrician says your child’s eating behavior is not worrisome, it’s worth it to get them evaluated. “It can’t hurt,” she adds.

The sooner kids get treated for selective eating, the better off they’ll be. Keddy says the average age she sees kids are 10. But children often display signs at much younger ages, typically starting around ages 3 to 4.

And if left untreated, kids who are selective eaters will grow into adults who can only eat a short list of foods. This not only negatively impacts health but hampers social activities where food is often the central part of gatherings.

So when in doubt, get your child evaluated. If this isn’t an issue for you, stay tuned for our next post in this series about the kind of little eater you have at home (and why it matters!).

Next: How to Pinpoint Your Child’s Eating Personality (and Why it Helps)

Want this entire picky-eating series plus new content, research and stories? Get my new new e-book From Picky to Powerful: The Mindset, Strategies and Know-how You Need to Empower Your Picky Eater