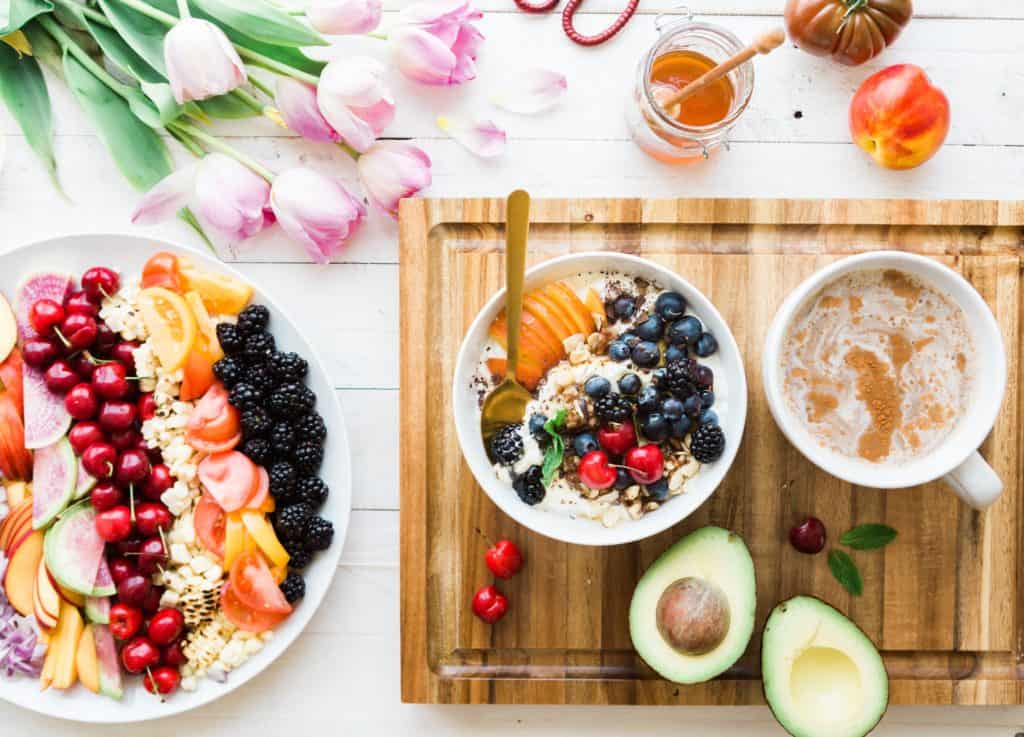 We are wrapping up our series on Picky Eating. And I’m saving the best for last.

I’m often asked what parents can do to get their kids to eat healthy. While there are no quick fixes, I’ve gathered a list of proactive, research-based actions parents can take to positively influence their kids eating habits.

Helping kids accept nutritious fare starts at conception. The amniotic sac not only transmits nutrition but the flavors of the food eaten. Studies show that the wider range of flavors babies are exposed to in utero and through breast milk, may help to increase their preference for a more diversified diet later on.

A 2001 study published in Pediatrics assigned 46 women to consume either water or carrot juice for 4 weeks prenatally. When the infants were given carrot-flavored cereal at 6 months of age, the babies whose moms drank the carrots juice had few negative expressions and seemed to enjoy the cereal more.

2. Get in as much variety as you can

Most babies and toddlers under two are willing to eat just about anything.  Research suggests that the more dietary variety kids get in the very early years, the more accepting they will be later on.

So start with bland fruits and vegetables but up the ante. Use herbs, spices, garlic and onions to make food taste good.  Once kids can eat table foods, let them join you at the dinner table. Your mission is to get them to try as many flavors as possible.

3. Make the unfamiliar familiar (and accessible)

Research suggests that repeated exposure is the most powerful tool when it comes to helping children accept new foods. A 2003 study published in Appetite showed daily exposure was much more effective than nutrition education or doing the same old thing.

But experts in behavioral economics say parents need to go a step further by making healthy foods highly accessible. So layout an attractive bowl of fruit on the kitchen table.  Include veggies with dip with meals and while you’re preparing dinner.  Studies show the visibility of food increases the desire to eat it.

“I’ve learned that at this stage, they so much want to be like their parents, so if I’m enjoying a nice green salad and broccoli or asparagus, they want to try it too,” says Lauren O’Connor, MS, RD, dietitian and mom of twin preschoolers.

Now, this may not happen automatically for every kid, but research supports the notion that kids are more likely to eat food when they see their parents eating it.

Family meals combine the benefits of repeated exposure with role modeling. It also teaches kids how to behave at the dinner table and gives families time to connect. I know your schedules may be wacky, but get this habit going as soon as you can.

Kathleen Cuneo, Ph.D., from Dinner Together says that switching from special kid meals to family meals was the turning point for her now teenage daughter. “I saw a positive change when I stopped nagging her and we made a commitment to family meals,” she says.  “When I backed off and she was expected to eat from what was made available, she became open to trying new foods.”

6. Entice them with food names

Parents can learn something that restaurant owners already know — you need to make food sound tantalizing.   In his studies, Brian Wansink author of Mindless Eating,

demonstrates that the name we give a food can make a big difference in how children perceive it.  In one of his studies, when the researchers called veggies names like “X-ray carrots” or “princess peas” kids were 60% more likely to try it.

“Dinosaur broccoli reminds kids of dinosaurs – and they think they are cooler,” he says. “Re-naming food increases its appeal”

Research suggests that children are more likely to accept new foods if they are similar to other recipes they like. In a previous post, Alexandra Logue, Ph.D., Psychology Professor and author of  The Psychology of Eating and Drinking, discussed how some fussy eaters are supertasters — and she used to be one of them.

When she first started eating salad her mom put a lot of her favorite dressing in the bowl and a small number of vegetables.  Over time the dressing quantity decreased and the vegetables increased. This is how she learned to like salads.

8. Engage them in the process

Julie Negrin, certified nutritionist and cooking instructor, knows that getting kids involved in the kitchen can transform their relationship with food.  She says that because kids feel little control over their day to day environment, helping with meals gives children a sense of ownership and makes it more likely they will eat the meal.

“I encourage parents to have kids pick out new vegetables at the market or flip through cookbooks for menu ideas,” she says.  “Kids have been helping with the meal preparation in almost every culture for thousands of years. It’s how they find their place in the “tribe” and the world around them.”

9. Help them make the health-body connection

When certified pediatric dietitian, Angela Lemond, works with frustrated parents, she teaches them the three Es:  Educate, Expose and Empower. The education part is helping kids understand how certain foods relate back to the health of their bodies.

“I tell my kids how fruits and vegetables have super-powers,” she says. “For example, I explain how these superpowers put an imaginary shield around their bodies protecting them from germs and helping their boo-boos heal faster.”

10.  Try new foods when they are hungry

You probably notice there are times of day when your child is more hungry than others. Work with your child’s natural appetite rhythm.  If they typically eat small amounts at dinner but seem ravenous at lunch, try new foods then. And watch the in-between meal snacking and juice drinking that can be appetite killers.

It’s not always the taste of veggies that turns kids off, it’s the texture. Researchers from Wageningen University provided kids (4 to 12) carrots and green beans that were steamed, mashed, grilled, boiled and deep-fried.  The kids preferred the boiled and steamed versions.  Why?  Because they were crunchier, had little browning and less of a granular texture.

So experiment with different crunchy textures and see how it goes.

Lisa Gross, dietitian and mom of two young kids said that when her daughter was two and turned ultra picky, she was tempted to provide her with only her favorites (she loved pasta!).

“I just kept offering the same food we ate but always offered fruit, bread and some other food that she would eat,” she says.  “I hoped that she would outgrow this stage and now that she’s five it’s much better.”

Read: The Side Strategy that Saved My Family’s Mealtime

According to a 2010 study published in the American Journal of Clinical Nutrition, preschoolers served bigger portions of vegetables as a first course at 47% more.

So put out the fruits and veggies while you’re putting the meal together, your kids might eat a whole serving of fruits and vegetables, and then some.

While the researchers of the study published in Appetite say that the novelty can wear off, it’s important to remember that kids like fun.  And if we can present food in a fun and attractive way it can pique their interest and desire.

According to Smarter Lunchrooms, requiring kids to take a vegetable at school has no impact on consumption.  But if kids are given the choice between two veggies, they consume 20 percent more.

When you can, have your child decide between two items, the peas or carrots, banana or cantaloupe.  This helps them feel like they made the decision of what vegetable to eat.  And they might respond by eating it.

Get a big picture view

When you think about it, picky eating is really a parent problem.  Jennifer from The Mommy Archives said it well: “One of the feeding issues I had was with me.  I realized that I was the one that was panicking when I made a meal and he wouldn’t even try it. I would be so worried he wasn’t getting enough nutrients. Once I let that go and let him set the pace of trying new foods, our meals became so much less stressful.”

Has this picky-eating series helped you look at your child’s eating differently?

Want this entire picky-eating series plus new content, research and stories? Check out my book From Picky to Powerful: The Mindset, Strategies, and Know-how you Need to Empower Your Picky Eater