I was driving on the freeway when an intense rush of fear consumed me. I thought, “Do I pull over?” Luckily, a friend in the front seat started talking and it distracted me. Soon enough the fear dissipated (she never even knew). Following the car episode, I experienced times of increased heart rate, palpitations, and tightness when swallowing. These symptoms were familiar but it had been over 20 years since I experienced them! I got help, made some changes, and the symptoms eased.

I soon discovered that there was something else working behind the scenes: perimenopause. Even before the anxiety, I had experienced less-noticeable changes including more intense PMS, constant sore breasts, and irritability. I soon found myself researching this topic full steam. I’d love to say I found one easy answer but I didn’t. In fact, no other developmental stage has been less straightforward. But ladies, that’s why we need to discuss them!

So let’s get started.

How is Perimenopause Defined?

Perimenopause is the transition period before menopause when the menstrual cycle ends. It typically lasts 1-5 years but can last up to 10 years depending on how you define it. The start of this transition is not marked by age but by ovarian reserve. In short, how many eggs a woman has in her uterus. To understand this, let’s do a quick hormone-cycle review.

During the peak reproductive years, estrogen is produced by follicle-stimulating hormone (FSH) and luteinizing hormone (LH). FSH stimulates the follicles to produce estrogen. When estrogen reaches a certain level, LH levels rise and the dominant follicle releases an egg. This is ovulation. The left-behind follicle produces progesterone along with estrogen to prepare for pregnancy. When pregnancy doesn’t occur, menstruation takes place and the cycle repeats itself. Because the quality and number of eggs diminish in the late reproductive years,  anti-mullerian hormone (AMH)  and inhibin B — indicators of ovarian reserve — decline. In an attempt to stimulate more estrogen, FSH levels rise and the varying levels of estrogen cause cycles to become irregular.

Sometimes it’s enough to produce ovulation and sometimes it’s not. The STRAW staging system (Stages of reproductive aging workshop) outlines the changes from the first period to the last and beyond. Early perimenopause is defined as a menstrual cycle that changes by 7 days in length and late perimenopause are when cycles are greater than 60 days apart. When estrogen levels get low enough — and don’t go back up — cycles stop completely. The median age for early perimenopause is 47 and late perimenopause is 49. Eighty-eight percent of women go through menopause at age 51 but the range is anywhere from 40-58 years. A woman is considered in menopause when she goes an entire year without a menstrual cycle. 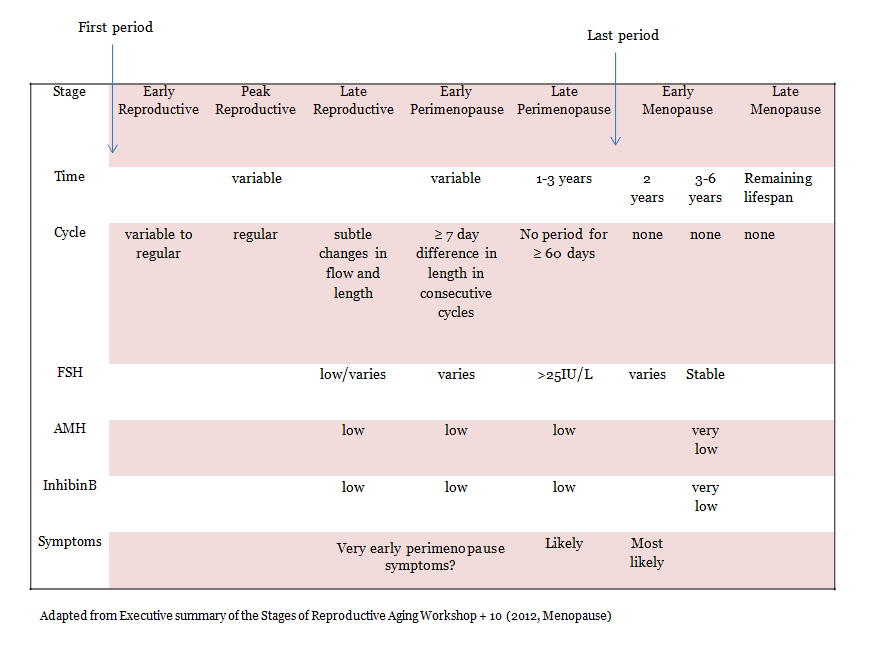 About a year ago I had some labs run –showing normal FSH and estrogen — and the conclusion that I was not perimenopausal (cycles regular). Like a lot of women, I went searching for answers. And that’s where I found The Centre for Menstrual Cycle and Ovulation Research (CEMCOR) and the work of Jerlynn Prior BA, MD, FRCPC Professor of Endocrinology and Metabolism at the University of British Columbia in Vancouver, BC.

“High estrogen and progesterone levels in pregnancy are normal and necessary, but in the perimenopause, estrogen is high but progesterone is not,” writes Prior. “It is this imbalance that can cause significant difficulties for many women.” According to CEMCOR, very early menopause occurs even when women have regular cycles and experience at least three of the following symptoms:

The Why Behind Perimenopause Symptoms

According to the current definition of perimenopause, symptoms typically occur late in the game because of declining estrogen levels and include hot flashes, poor sleep, vaginal dryness, adverse mood (depression and anxiety) and memory problems.

During this stage, 80% of women will have one or more of these symptoms. But other experts like Prior believe symptoms occur earlier due to higher (and erratic) levels of estrogen and lower levels of progesterone. Because the brain is accustomed to a predictable rise and fall of estrogen, during very early, early, and late perimenopause, these levels become irregular, which means they spike and crash. Even when levels drop back to normal in very early menopause, it’s the drop itself produces a discharge of stress and other hormones.

It’s kind of like puberty. Before levels get stable, they are less predictable which is why girls’ cycles take time to become regular. It’s like a rollercoaster instead of a smooth, predictable ride. And that rollercoaster ride sure is fun!

“What happens with a hot flush is like what a drug addict goes through during withdrawal — a major brain discharge of stress and other hormones,” writes Prior. “It is this hormonal discharge (along with the flush) that causes the anxious feelings, nausea and chest pain as well as the feeling of heat and the sweating that go with them.”

This can also help explain why I felt more anxious, a common complaint at midlife. In one study, out of 487 women aged 40-64, 53% of the premenopausal women reported anxiety and/or depressive symptoms, 66% of the perimenopausal did, and about half of the postmenopausal women. It’s no wonder that during this time women feel more stressed. 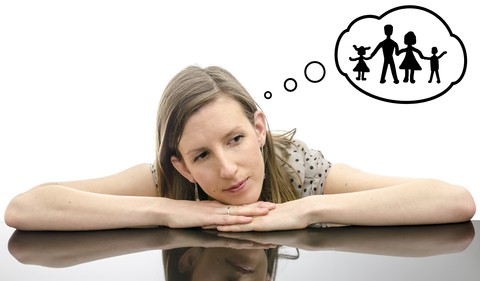 What do we do about this?

Of course, not every symptom in midlife can be attributed to perimenopause alone, especially the mood changes. Life stressors that go along with midlife like raising kids, helping aging parents, lifestyle changes, and other struggles. But step one is understanding how female bodies change during this time, so you know what to expect.

In future posts, we’ll talk about how to ease these symptoms, what hormones changes mean for the health of our bodies, and how to use this time to recharge health and well-being. And I’m going to have Dr. Prior on my podcast to help explain this all so stay tuned! Have you experienced any symptoms of perimenopause? And if you went through it, any words of advice?