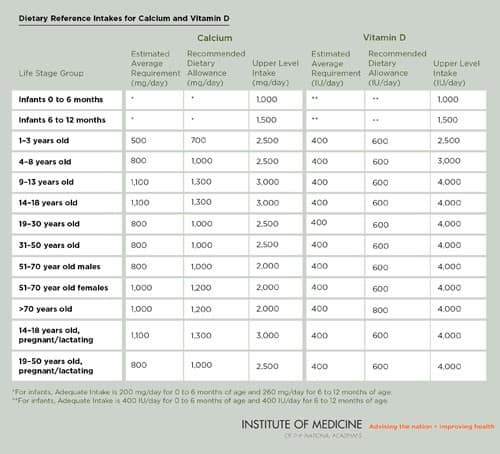 Big news rocked the nutrition world last week. And it was about two of the most talked about nutrients of the last decade: calcium and vitamin D.

In recent years, the U.S. and Canadian governments have asked the Institute of Medicine (IOM) to review the research and update the DRIs (dietary reference intakes) for calcium and vitamin D.

It was getting a little embarrassing since the DRIs hadn’t been updated since 1997 — all while low vitamin D levels had been tied to variety of conditions such as cancer, heart disease, autoimmune disorders, diabetes and metabolic syndrome.

Something had to be done. And it was.

What the IOM committee concluded
After reviewing over 1000 studies, and listening to researchers in the field, the IOM committee concluded that the strongest evidence for calcium and vitamin D’s health attributes are their roles in bone health. In the IOM’s report, they say that studies are inconclusive regarding D’s role in other health conditions.

The IOM report details some of the problems with the current literature. Many studies include both vitamin D and calcium making it hard to distinguish the benefits of each. There is a lack of dose response studies to prove cause and effect (vs. population studies that show associations). Lastly, there is no consensus in the scientific community about optimal levels of vitamin D in the blood. What one researcher calls “inadequate” another might say is “optimal.”

How are we doing?
To the surprise of many health professionals (including me) they say most people are getting adequate amounts of both D and calcium excluding certain populations. The population group not getting enough calcium through food are girls aged 9-18 years old, who have the highest needs, and women over 50. They add that women over 50 usually get enough, if not too much, from supplementing their diet.

While intakes of vitamin D are below current recommendations, the IOM committee says blood levels are adequate to support optimal bone health — 20 ng/ml (nanograms per milliliter). Even though many physicians use 30 ng/ml as the cut off, some vitamin D experts believe much higher levels are needed, 50-80 ng/ml, to optimize health and prevent disease.

Those at highest risk for low vitamin D levels include people who carry extra weight, live in upper latitudes in North America, are dark skinned, wear sunscreen or are indoors most of the time, are vegans and babies born premature.

The New DRIs for Vitamin D and Calcium
Below is a chart summarizing the new DRIs for calcium and vitamin D (click on the chart to enlarge). The RDA (Recommended Dietary Allowance, in middle column) is the amount to shoot for. The vitamin D requirement assumes that most individuals get a minimum amount of sun exposure which is why levels increased significantly from 1997 — from 200 IU to 600 IU for most people. Calcium didn’t change much except for younger ages. It went from 500 mg to 700 mg for children 1-3 and from 800 to 1000 for children 4-8. 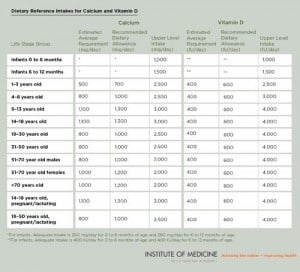 To give you an idea how these numbers relate to food, an 8-ounce glass of milk, 6-8 ounces of yogurt or 1.5 ounces of cheese contains about 300 mg of calcium. The primary source of vitamin D is the sun but it can also be found in fish (a 3 ounce portion of salmon has about 300 IU) and fortified milk and food products. Milk typically contains 100 IU per 1 cup serving and other fortified beverages contain the same or more. On the other hand, 30 minutes spent in the summer sunshine without sunscreen provides about 10,000 IU!

Reactions to the Report
There have been mixed reactions to the IOM report and recommendations. Some health professionals believe the IOM committee does not acknowledge the science demonstrating an increased need for vitamin D. The following is a response from the Vitamin D Council:

“Calcium and vitamin D are important nutrients. As with all nutrients, enough is good — too little or too much is bad. The IOM invokes the precautionary principle to offer recommendations that are reasonable, and willfully conservative. But a relative absence of evidence means that guidance is as much about judgment as science. My judgment, and familiarity with the literature, leaves me quite comfortable with the IOM conclusion about calcium, but with a bit more doubt regarding their conclusions for vitamin D.”

What do I think?
I agree with the statement made by Dr. Katz. Government reports and recommendations are always conservative — and they should be. That doesn’t mean that people don’t need even more vitamin D than what is recommended. What is really needed are better — and more — studies.

It’s important to note that the RDAs for vitamin D are even higher for children 1 year and older. The American Academy of Pediatrics recommends 400 IU and the RDAs are now 600. Most children will not get enough from their diet and will benefit from supplementation. I will also be watching my 4-year old’s calcium intake as her needs just went up to 1000 mg!

As for me, I have a physical scheduled in January and plan to have my vitamin D levels checked. I’ve been taking 2000 IU for several months now. Even though there isn’t widespread consensus on the blood levels that are optimal, the test will help me decide where I stand. I’ll be sure to report back my findings.

I’m curious what you all think about this vitamin D situation. I’d love to hear from health professionals too!