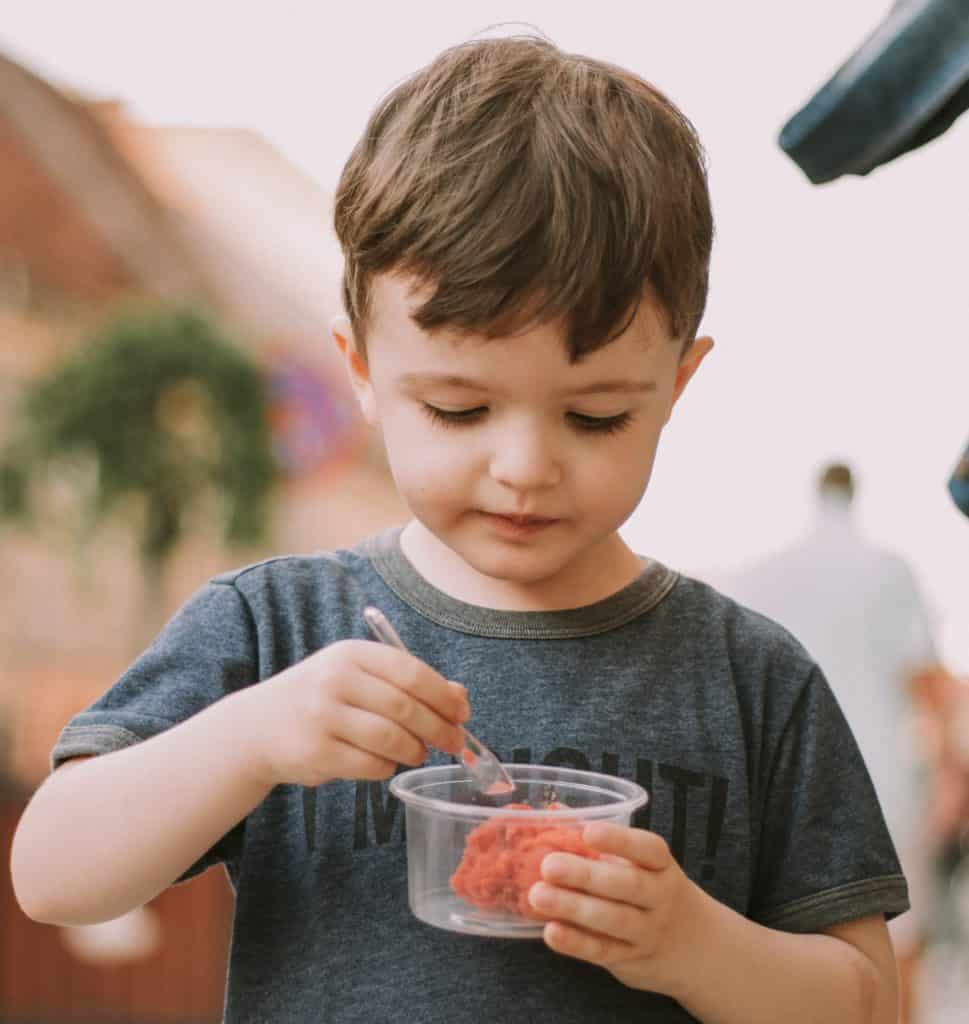 This is Part 1 of my From Picky to Powerful Series

We fed our baby a laundry list of foods so we would expose him to a wide variety of flavors at an early age — avocado, beets, lentils, barley, etc.  We made almost all of our baby food, starting with veggies and not the sweet fruits until later. He is now 2 1/2 and would prefer to live off Dino nuggets and french fries.  If I had to sum it all up, I think we are disappointed that we did everything “textbook” from the beginning and we ended up with the same result as if we hadn’t put in any effort. He won’t eat veggies unless it’s a potato and he prefers to consume calories only in breakfast and snacks with maybe a few bites of lunch or dinner.

I get emails like this all the time and the story is very similar. Parents do the best to get their child off to the right start only to find he turns picky anyway.  In this first post in my second picky eating series, we are diving into development and how it relates to eating. I believe this is the first place someone should turn when picky eating is not going away.

One of the reasons picky eating is so hard on parents is that children start life very accepting of food at a time when growth is at its highest. When a child all-of-a-sudden becomes more selective as growth slows, it worries and disappoints parents (for more about why this happens see this post).  But eating this way isn’t always problematic or something that needs to be fixed, but a normal part of a child’s development. Instead, it ‘s something parents need to expect and understand. And it can happen when you least expect it.

“My 3-year-old was the most adventurous eater I had ever seen.  Over the past couple of months, she’s becoming increasingly picky — she’ll still eat a lot but sometimes only bread or only fruit,” said Megan.  “She’s even begun saying ‘I don’t like that’ to things she used to love.  I’m lucky to have read enough of your stuff to know how to handle it, but it’s good for everyone to know that picky eating can happen to any child!”

There is no official definition of picky eating but Kay Toomey, Ph.D., pediatric psychologist, defines it as a child who eats about 30 foods but can still tolerate new foods on their plate and eats from most food and texture groups. This is different than problem feeders that eat 20 or less food and have trouble tolerating new items on their plate.

The food neophobia (fear of new food) linked with picky eating peaks from ages 2 to 6 years of age.  That doesn’t mean picky eating disappears by age 6, but it typically gets better as kids enter school. So if you have a child who turned picky at age 3 and isn’t much different at age 4, that is pretty normal in terms of development.  Trying to fight against this has the potential to negatively color a child’s eating for the next stage, keeping picky eating alive instead of gradually getting better. The key is not to get children to eat as so many try, but to get through this stage with a child who feels good about eating while still being exposed to a variety of food. 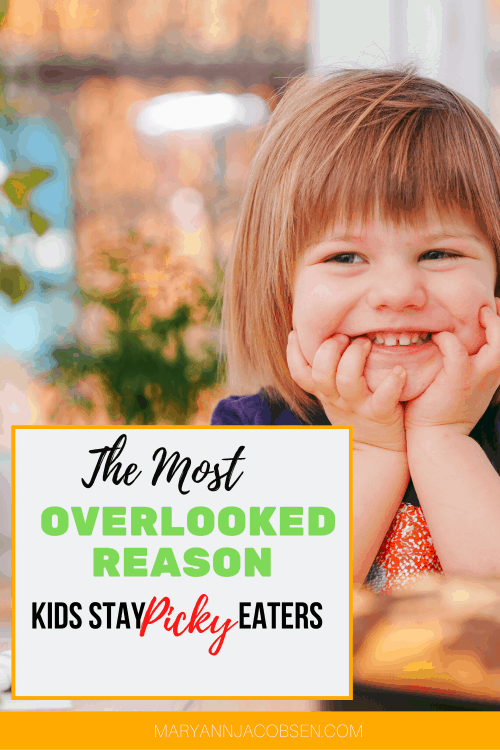 Miles, always a good eater, came home from his first-grade class asking for foods like mac and cheese and chicken nuggets. His mom was taken aback and when into lecture mode about how he needs to eat the food she makes and how unhealthy those items are.

While this seems like picky eating, it’s not the same as the super-resistant toddler years because Miles can eat a good variety he’s just choosing not to. The truth? Miles is being influenced by his peers and the food environment which is totally normal at this stage. We explain this in Fearless Feeding:

Psychosocial development plays out in friendships. The desire to belong is a normal part of development, and eating what other friends eat is part of belonging. This desire is strong enough to change not only what and how much your child eats but also how she feels about herself.  Media images and food ads also have this power.

Again, trying to fight this normal development makes a mountain out of a molehill. In the case above, Miles’ mother could have one night where Miles gets to choose dinner but he will need to help prepare the meal.  And of course, there are healthier preparation methods for chicken nuggets and mac and cheese. This way, it’s a win-win instead of Miles feeling like he is being forced to eat food he doesn’t like.

Know what to expect and the payoff will change

When Little D started through the very resistant stage I was completely prepared. I remember my husband making a few comments like “He didn’t eat much at lunch” and I’m like “Really?  Haven’t you learned anything from me? The key was I knew what to expect, I understood nutritional needs and how to meet them and I kept meals pleasant. Yeah, I could wrestle him for that one bite but why?

I’m anticipating the next stage where he will expand his eating as his big sister has. I know that like with anything, enjoyment is key to his learning. Parents read books to children way before they know how to read. They encourage children to scribble before they know how to draw. Parents need to be okay and encourage eaters who are still learning.

The chart below (click to enlarge) is a reminder of what parents can expect and why taken from Fearless Feeding.  When we are prepared, we begin to see other benefits besides food that is eaten.  A happy child who is curious, albeit cautious, about new food. A child who is learning at his own pace and feels the love and support with every meal. A child who runs to the table instead of having to be dragged. 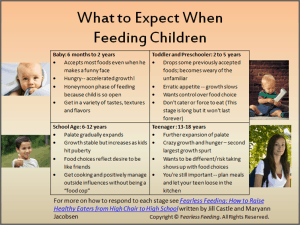 “The constant reminders not to pressure and that picky eating is one stage of normal development have really helped,” said Katie. “My daughter even told the doctor at her well check to check her taste buds and see how much they’ve grown! That’s how we frame it at home when she doesn’t care for something the rest of us like, that her taste buds are still growing like the rest of her and will get there.”

This just the tip of the iceberg. We will get into problem feeders next and will discuss other factors that keep picky eating alive longer than it has to be.

What developmental stage are you experiencing now?  Does it help understanding how your child’s development relates to eating?

Posts Included in the Series:
1. What to do When Picky Eating Doesn’t Get Better (Intro)
2. The Most Overlooked Reasons Kids Stay Picky Eaters
3. How to Tell if Picky Eating is Normal, or Not [Next]
4. How to Tell if Pressure is the Culprit
5. Five Small Changes that Can Make Picky Eating Much Better
6. The 10 Golden Rules for Exposing Kids to Food
7. Introducing my New Book: From Picky to Powerful

Want this entire picky-eating series plus new content, research, and stories? Check out Maryann’s book From Picky to Powerful