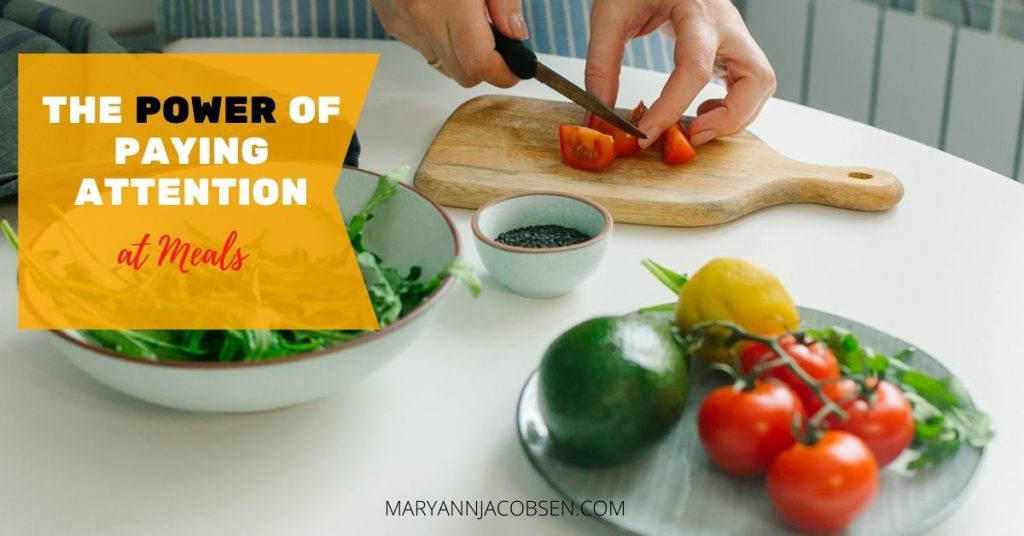 As a young child, I remember sitting down to family dinners but this petered out as I got older. I mean, why sit at the table when you have those cool TV tray tables that allow you to eat while watching TV?

For those of you who grew up in the 70s, you can probably relate. At the time, traditional sit-down meals were going out of style in favor of eating while doing other things. And eating “on the go” became a cultural phenomenon.

As I grew into an adult and continued my distracted eating ways, I never considered it a problem. Like lots of things in our culture, it just became a normal behavior.

I was hungry all the time but it never dawned on me that sitting down and paying attention while eating was the antidote. That was, until my dietetic internship where I had to go to the hospital for main meals and had nowhere to keep food in my dorm.

Once I discovered the benefits I never went back to constant eating that left me in a state of dissatisfaction.

The power of paying attention at meals is real, and something every family needs to know about.

Research reveals that not paying attention to what you eat, when you eat it, has real consequences.

Take a study with female college students. One group ate lunch while focusing on the sensory qualities of the food. The second group read an article while eating and the third just ate like normal.

Later when offered cookies, the first group who paid close attention to what they were eating not only ate fewer cookies but rated their appetite as lower than the other two groups

The reason for this is what researchers call “episodic meal memory.” When we pay more attention during eating, instead of being distracted, we are more likely to remember that meal and eat less the next time.

Research shows eating while distracted affects the immediate meal somewhat but it has a larger effect on later eating. In short: being distracted while eating lunch could mean eating more than you need at dinner.

Read: Why the “How of Eating” is so important

There are many real-life examples of this. You read a few pages of the book but aren’t paying attention so you have to reread those pages next time.

You are on the phone while checking email and are asked a question you have no idea how to answer.

When we don’t pay attention while we eat, that meal doesn’t register in our brain the way it should. So when we go to eat later, we forget about what we ate and are likely to eat more than our bodies need. 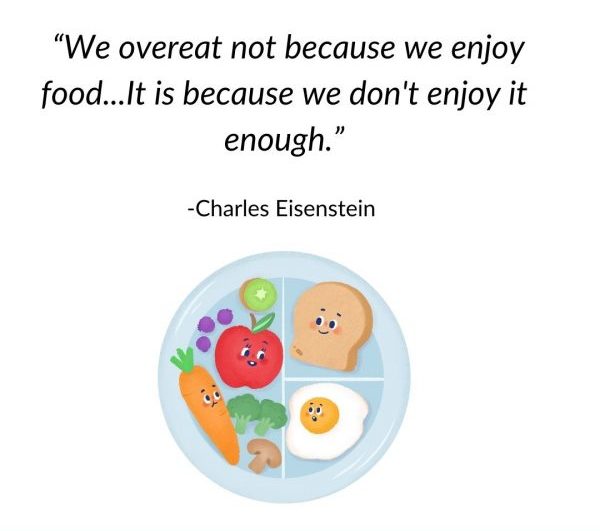 The good news is that paying attention is a relatively easy thing to start doing. You don’t have to buy or cook food differently. Just start by slowly adopting a culture of paying attention to food with your family with the three steps:

1) Don’t allow distractions, like the TV or devices, at meals. Have a designated place to eat and make your eating space visually pleasing when possible.

2) Be mindful of the wonderful taste and texture of the food that’s being eaten. Leave judgment out of eating (yours and your kids), which is a surefire way to stir up distraction.

3) Provide visual cues about what was eaten before to refresh your memory. I believe this is easier when you have a structured eating style, but I often remind kids of what they ate, especially when saying no to requests for certain items (remember we already had chips, ice cream, etc.).

Of course, there are exceptions that mean sometimes your kids eat in the car, you grab something to eat while running errands, or everyone stuffs food in their mouth before heading out the door.

But if you’re attentively eating most of the time, that’s what counts. And hopefully, you’ll want to pay attention because food tastes better when it’s enjoyed and savored.

Paying attention to the food on our plate is powerful because it leads to satisfying and nourishing eating experiences, the very thing we want for our family.

How to Raise a Mindful Eater Post Series
1. Obstacles and Benefits to Raising Intuitive/Mindful Eaters
2. The Importance of Self-regulation and Stress Management
3. Myths About Food Addiction That Keep it Alive
4. The Real Reason Children Crave Carbs
5. The Power of Paying Attention at Meals
6. How to Build Your Child’s Self-Control Muscle [Next]
7. How to Keep the Weight-Obsessed Culture from Harming Your Child’s Relationship with Food
8. My New Book: How to Raise a Mindful Eater