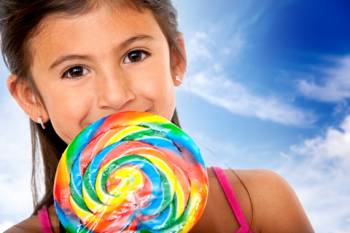 The kiddie party is about to end while a group of parents sit around and watch their children spiral out of control. They’re jumping around, the tantrums are escalating and no child seems to be listening.

“This is why we never give my son sugar before bed,” another chimes in.

But parents don’t always realize that it’s not sugar that causes hyperactivity in kids but something else lurking in the food their kids eat. Yes, it could also be that they are just overtired and over-stimulated but there could be more to the story.

The safety and behavior effects of certain food additives have been questioned in recent years. Let’s investigate what this means for the health and well being of your family.

Science hasn’t shown a connection between sugar intake and hyperactivity, yet this myth continues to live on in many households. This doesn’t mean that excess sugar is beneficial, it just hasn’t been found to be related to behavioral issues in kids.

Take a research study published in the Journal of Abnormal Psychology in 1994.  Thirty-five 5 to 7-year-olds labeled by their mothers as “sugar-sensitive” were separated into two groups.  While both sets of children were given the exact same sugar-free drink, one group was told their kids got a large dose of sugar and the other was told the truth.

The mothers who were told their children were given sugar rated their children as significantly more hyperactive. This study highlights how just having the expectation that sugar causes adverse behavior makes it seem like a reality.

While sugar is not implicated in hyperactivity, there are other ingredients in sugar-containing foods that could be the culprit.

The world of artificial colors

One reason sugar has been implicated in behavior issues with kids is that sugar-containing foods tend to have food dyes. Items like juice drinks, candy, colored breakfast cereals, certain snacks,, and baked goods often contain artificial food colors or dyes.

According to a 2008 study published in Nutrition Reviews, research points to a relationship between hyperactivity and artificial food colorings in a small subset of hyperactive children.  These children are considered intolerant to such additives.

But two recent UK studies found increased signs of hyperactivity in otherwise healthy children ingesting artificial colors and the preservative benzoate. The results of these studies led the British government to recommend removing food dyes in the food and restaurant industries. The European Parliament passed a law that foods that contain such ingredients carry the following warning label: “may have an adverse effect on activity and attention in children.”

On June 29th of 2010, the Consumer for Science in the Public Interest (CSPI) wrote a letter urging the FDA to ban all food dyes. They lay out their argument for such a ban in a report titled “Food Dyes: A Rainbow of Risks.”

In the report, CSPI discusses the research linking food dyes to hyperactivity but also discusses other health issues and safety concerns:

The FDA definition of safe color additives is “safe means that there is convincing evidence that establishes with reasonable certainty that no harm will result from the intended use of the color additive. ”  CSPI disagrees with this statement and believes that because dyes offer little in the way of nutrition (for cosmetic purposes only) they should be banned.

The food industry responded to this report stating that food dyes have been extensively studied and are safe for consumption.

What’s a parent to do?

I don’t believe that food dyes are unsafe but I do not want them in the daily diet of my family. I hope that FDA revisits food dyes and their long term safety for both kids and adults. But until something changes, here are tips on reducing food dyes in your family’s diet:

So tell me, do you watch out for food dyes in the food you buy?