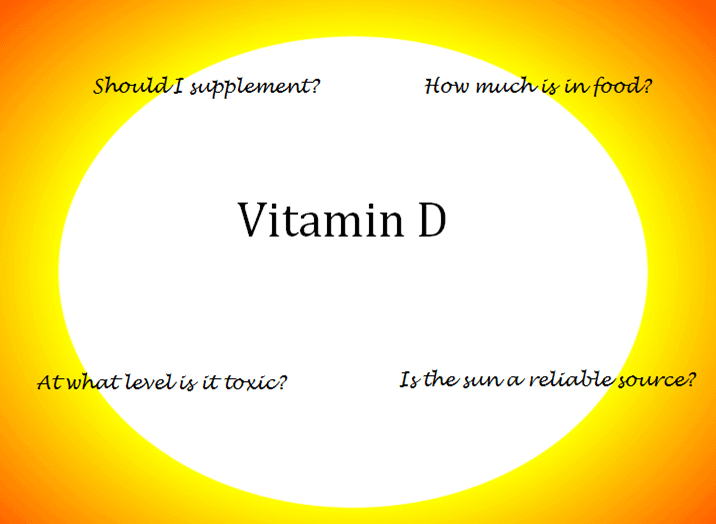 More than a decade ago I was calculating the nutrition for a meal plan when vitamin D kept coming up short. This happened even with the inclusion of milk so I started to look into it. And what I found was really striking.

Every parent should understand the impact vitamin D has on kids’ health from pre-conception all the way to adulthood. So let’s dig in.

What Does Vitamin D Do?

Vitamin D helps the body maintain the right balance of calcium and phosphorus. Without adequate vitamin D, not enough calcium is deposited into bones to keep them strong and healthy. This is why vitamin D deficiency can result in bone diseases like rickets, osteomalacia (softening of the bone), and osteoporosis in adults. Sadly, rickets occurred for a long period of time, claiming young lives, before vitamin D’s discovery in the 20th century.

But vitamin D isn’t just about bone health anymore. Several years ago researchers discovered that most body cells have a receptor for vitamin D (outlined below), meaning they require vitamin D to function properly. Low vitamin D has been linked to various diseases like diabetes, heart disease, adverse pregnancy outcomes, autoimmune diseases, and certain cancers. Vitamin D is also related to brain health. For example, studies show children with ADHD and autism have lower blood levels of vitamin D compared to those who don’t. In one review, depression was found to be more than two times more likely in vitamin D deficient people. 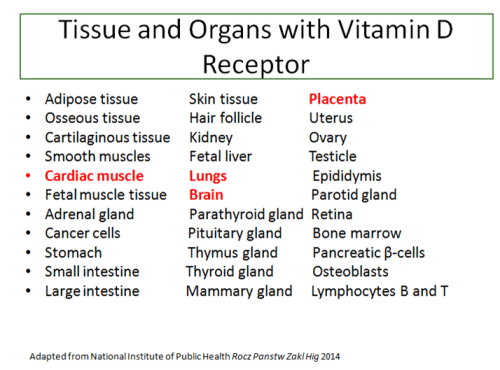 None of this means inadequate vitamin D causes these health issues (besides the bone diseases) but it does play a role. And while the exact role isn’t entirely clear, what is clear is families need to be sure they are getting enough vitamin D to keep their blood levels at an acceptable range.

One of the confusing parts of vitamin D deficiency is the lack of consensus on optimal blood levels. The Institute of Medicine recommends a baseline target of at 20ng/ml (that’s nanograms per milliliter) for bone health while the Endocrine Society’s cut off is 30ng/ml (and some groups higher than that). A recent review points to ideal levels of at least 30ng/ml to benefit from positive health outcomes.

So how are kids doing? Let’s start at the very beginning. In a sample of low-risk pregnant women, it was found that 30% had sufficient levels (>30 ng/ml), 47% were insufficient (20-29 ng/ml) and 22% were deficient (<20 ng/ml). At 4 months of age, 40% of un-supplemented breastfed babies were considered deficient. According to one study, approximately 10% of US children aged 6-18 years have vitamin D levels below 16 ng/ml. Another study found that as many as 61% have insufficient vitamin D levels (15-29ng/ml).

Rickets, while still rare, has been on the upswing in the last several years. It’s likely due to higher rates of breastfeeding with poor supplementation, more time spent indoors and sunscreen use. The AAP recommends breastfed babies be supplemented with 400IU after birth but the US is lagging behind other countries. According to a study in Public Health Nutrition, between 60 and 80% of infants in Europe are supplemented while 71% of breastfed infants in Canada are. But only 2% of infants in the USA and Australia receive vitamin D supplementation.

How to Get Vitamin D

For infants under one, the recommended amount of vitamin D is 400IU and for older children and adults its 600IU. This jumps to 800IU at age 65. But if someone becomes deficient, higher amounts are needed to increase and maintain blood levels. Some worry about getting too much of vitamin D because it is a fat-soluble vitamin but toxicity is rare. Vitamin D may become toxic starting at blood levels of 200ng/ml and we know most children and adults aren’t even at 30. Unless under the supervision of a doctor, its best not to exceed the safe upper limit set by the IOM: 1000IU for infants up to 6 months old, 1500IU for infants 6-12 months old, 3000IU for children 4 to 8 years old and 4000IU for those 9 years and older.

The chart below shows key food sources of vitamin D. Not included is infant formula which is fortified with vitamin D, breast milk which contains 35IU per liter and fortified foods that have a range of vitamin D per serving (see this link for complete list). It would take about 4 ounces of salmon (every day), 11 ounces of tuna, 6 glasses of milk and 12 eggs to meet the 600IU recommendations using food. 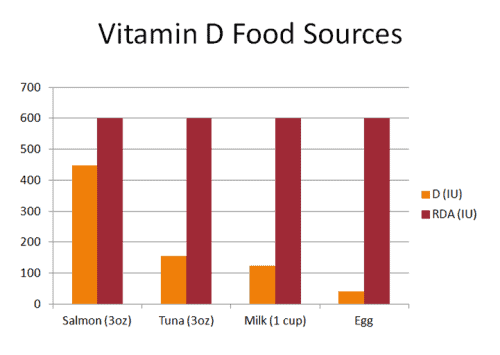 What about the sun? Well if you follow recommendations to prevent skin cancer, you will wear sunscreen that blocks out much of the UV rays. But doing so 100% of the time is hotly debated as some experts believe regular sunshine without burning (15 minutes max) 2-3 times per week is beneficial. Here’s where it gets tricky. Certain individuals are limited in how much vitamin D they make from the sun including those who carry extra weight, have dark skin, use sunscreen or cover up, and those who live in Northern or highly polluted climates and are over 50. The time of the year (and day) also matters, as UV ray exposure is highest from April to October between the hours of 11 am and 3 pm. So even with regular sun exposure, there’s no guarantee it’s keeping vitamin D levels up year round.

With what we currently know, its just makes sense to supplement with vitamin D when the diet falls short. The figure below can help you decide what is right for your child. 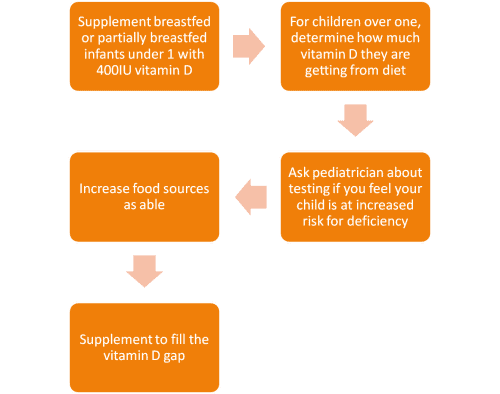 What’ the best vitamin D supplement?

As for supplements, vitamin D3 is typically recommended and what you will find in most supplements. I love Carlson’s drops and use them with my children. Instead of the 400IU I used their first year, I now use the 1000IU drops about 5 times a week. Me and the hubs take about 2000IU daily to keep our levels above 30ng/ml and get lab work done at annual physicals. In the summer, I supplement less due to increased sun exposure.

Is any of this new to you? Does your family take vitamin D supplements? Let’s talk about it in the comments.