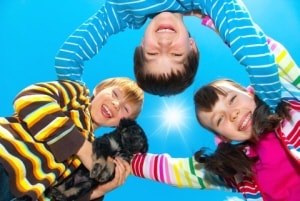 Yesterday the media was bursting with news about children and vitamin D. A study published in Pediatrics revealed that 70% of children –- millions of kids — have low vitamin D levels. Nine percent of 1 to 21-year-olds were found to be deficient in vitamin D and 61% had insufficient levels. I couldn’t believe it when I read that only 4% of children were taking vitamin D supplements.

Why are so many parents choosing not to supplement their kids?

I don’t think parents understand how easy it is for children to fall short on the sunshine vitamin. And I especially don’t think they understand the impact that vitamin D deficiency can have on life-long health.

Research suggests that insufficient vitamin D not only negatively affects bone mass (Rickets only occurs with a severe deficiency state) but it is linked to the development of cardiovascular disease, diabetes, cancer, and multiple sclerosis. In fact, the aforementioned study showed that kids with lower levels of vitamin D also had lower blood calcium levels, higher blood pressure and lower HDL (good cholesterol). For more information on vitamin D, see Is Your Family at Risk for Vitamin D Deficiency?

To help parents like you understand this public health concern, I’ve listed 4 key reasons why 7 out of 10 kids don’t get enough vitamin D.

Born to vitamin-D deficient moms: Kids aren’t the only ones with low levels of vitamin D. Many adults are at risk for vitamin D deficiency – and that includes pregnant women. If an expecting woman stays out of the sun, has dark skin or is overweight she is at increased risk. And expecting moms can’t necessarily rely on prenatal vitamins which contain 400 International Units (IU). According to the Amercian Academy of Pediatrics (AAP) policy report:

Supplementation with 400 IU of vitamin D per day during the last trimester of pregnancy has minimal effect on circulating 25-OH-D concentrations in the mother and her infant at term. An unsupplemented infant born to a vitamin D–deficient mother will reach a state of deficiency more quickly than an infant whose mother was replete during pregnancy.

It would be wise to test vitamin D levels during pregnancy so women would know if they need additional supplementation. During my recent pregnancy, I took an additional 1000 IU of D. If you are pregnant, talk to your doctor about a vitamin D test.

Not enough time in the sun: According to the aforementioned study, children who watched more TV (spending time indoors) were more likely to have low vitamin D levels. But if parents lather their children up with sunscreen every time they go outdoors, they’re faced with the same problem.

The problem with relying on the sun for vitamin D is it’s hard to determine if it’s getting the job done. According to Michael Hollick, a leading vitamin D researcher, the hours between 10am and 3pm (10-15 minutes of sun exposure is recommended) produce the most vitamin D. So relying on late afternoon or early morning sun exposure may not be enough. And most parents are worried about the risk of skin cancer.

There’s not much D in food: Fatty fish such as salmon, tuna and mackerel and fortified milk and cereal contain vitamin D but that’s about it for food sources. Many parents feel their milk-drinking kids are safe. But according to the AAP, children would need to drink 4 cups of milk per day to make it to the 400 IU they recommend. And while milk plays an important role in young children’s diet, too much of it can displace other nutritious foods.

For babies and nursing toddlers, breast milk offers very little vitamin D. This is why the AAP recommends breastfed children be supplemented with 400 IU daily starting in the first few days of life. Formula is supplemented with vitamin D. See my product review for Carlson Vitamin D drops.

There’s little doubt that vitamin D insufficiency is an important public health concern for families all over the country. Take the time to talk to your doctor and get your levels checked. Many health experts believe that 1000 IUs is an appropriate amount for adult supplementation. And remember the AAP’s recommendations for children – 400 IU daily for breastfed children and older children not drinking 4 cups of milk per day.

As more news and research breaks, Raise Healthy Eaters will be there to break it down for you.