We started our April with a nice birthday to mark Little D’s 2nd year. It’s hard to believe that we are officially out of the baby stage. Yes, there’s a tinge of sadness but we are glad to be moving on. Someday in the not-too-distant future, we will be diaper free.

Inspired by last week’s post I’m going to try cooking a whole chicken. But I’m going to try it first in the slow cooker. I’m also going to make a big batch of homemade spaghetti sauce and freeze what we don’t use.  Add that to my birthday on Tuesday, and it’s a big week!

After turning g the big 4-0, and becoming a mom, my birthday expectations have changed. First, I don’t celebrate beforehand like I used to.  It is not my birthday until the actual day. And all I really want is a nice, mellow day with people doing some mundane tasks for me.

My wish list? No tantrums, some time to myself, hearing from good friends and someone else preparing dinner for me. So Tuesday is dinner out.

Thursday Spaghetti with homemade pasta sauce and meatballs, sautéed green beans (I steam it first to make it soft enough for little D) and bread

I’ve been having Big A help in the kitchen lately. I realized that I was slacking in this area. Even on the days I’m home, I always seem to be rushing to get dinner ready so we can get the kids to be at a decent time.  But now, most nights, Big A is helping while Little D spends time with Daddy.

But I’m not doing this to get Anna to try more foods. I notice that sometimes she will and other times she won’t. The real reason I want to have her help? I want cooking to be a natural part of her upbringing and not something she has to learn when she’s older.

This is really my strategy for all things food. I just want my kids growing up preparing and eating nutritious foods — and non-nutritious foods in moderation. I don’t make a big deal about them having to eat healthy.  As they get older I will gradually educate them about nutrition in developmentally appropriate ways.  But I believe the best education is doing and seeing over and over. Basically, it becomes a habit that they enjoy.

And a big part of food preparation is grocery shopping. I take both of my kids shopping at least once a week with Little D recently getting into the “helping” action. But having a 2-year old help can also be hazardous. 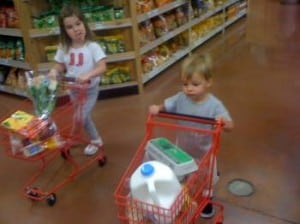 For example, the Trader Joe’s near us has little grocery carts for kids.  Big A was all over this when she first saw it, so she always grabs the cart and we put some food in it (for smaller trips that’s all we use).  A few weeks ago, Little D decided he wants a cart too. So now I have both of them running for a cart the second we get in there.

The first time we did this, the first part went surprisingly well. I just told Little D to follow his big sister. When we got to the checkout line, I reminded him to give the food to the check out person. He helped by putting the food up.

But then it was time to put the little carts away as they don’t allow them outside. Little D holds on to his cart for dear life and glares at me.

“We need to put the carts away now, we will use them again next time,” I told him in a loud and clear voice.

Little D looked at me and held on even tighter while his cute little eyes fill up with tears.

“I’m taking the cart now,” I calmly said as I gave it to Big A to put back. Little D fell to the floor in an all-out tantrum. One of his best.

Everyone stared but not in a bad way. There were lots of knowing glances from parents who have been there. We’ve been a few times since this happened and the tantrums get shorter and shorter. Little D is slowly learning how to shop.

After the FDA took two days to deliberate they decided by a vote of 8 to 6, that there is insufficient evidence to put warning labels on foods that contain dyes and petroleum-based additives. See this article for more of the details. The FDA did acknowledge a potential link between food dyes and hyperactivity:

For the first time, FDA staff said Thursday that studies suggest artificial dyes may exacerbate problems for some children who already have attention deficit and hyperactivity disorder. About 5 percent of U.S. children suffer from the disorder, according to federal estimates

While this isn’t the greatest news, I do think that consumer demand can change things. Just recently Fritto Lay announced it will be taking artificial dyes out of most of its products. Why? Because that’s what consumers want — and it’s showing up in sales.

What do you think about the FDA decision?