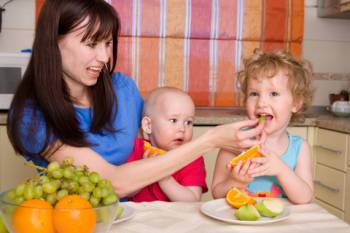 We’ve been dealing with the stomach flu around here. Just when I started bragging about the only one not getting sick — I got sick. I finally had that day of doing nothing I’ve been dreaming about. I slept most of the day and my husband took care of the kids. And guess what? They are still alive!

It’s a good thing I did my meal planning early. I just have to find some time to go the store today. For more meal plan inspiration go to Org Junkie.

Monday: Shrimp Tacos with all the toppings

Have my kids traded places?

No child has loved sweets more than Big A. When she was three, she really hit her peak for requesting sweets. But it seems that she and Little D have switched places. Over the holidays I made some cookies and Big A was done after one cookie while Little D proceeded to have four. I have never seen her eat only one cookie before.

Don’t get me wrong, she still loves sweets and asks for them but there is a definite change. I think part of it has to do with her beginning to like food more. She actually has some dinners she eats and definitely eats more at mealtime than she ever has (including the lunch I send to school). I think her need to fill up on sweets is becoming less as she eats, and likes, more food. She’s even been sitting quietly at my mother-in-law’s and trying the food, even though she still doesn’t eat much of the meal.

Little D, who will be three in April, has become more selective. He’s in the bread phase and his love of meat is less, although he still loves eggs and meatballs (my husband was so proud that he would eat a whole hamburger at In ‘N Out — now he only takes a few bites and sips on the shake!). I know his growth has slowed and this is all typical, so I’m barely fazed by this compared to when Big A went through it.

This is just another example of how things change and the many food phases kids go through — both fun and not so fun. So if you’re having a tough time, hang in there. If you want to talk leave your challenges in the comments. 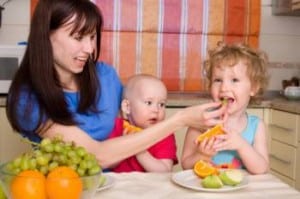 Before New Year’s, Tara Parker-Pope wrote an article about the difficulty of losing weight and keeping it off. I wrote a response to her article on WebMD Real Life Nutrition. I won’t rehash all I wrote, but a comment someone wrote really struck a chord with me:

Prevention seems to be the most effective form of addressing obesity on a national scale. I think a huge question would be, “how do we get Americans, as a whole, to WANT to raise their children in this fashion?” Because ultimately, if parents don’t believe that the way they treat food is a problem, they won’t fix it.

I kept thinking about the questions this reader raised: ”’Why don’t more Americans want to raise their kids in this way?” Then I watched Oprah interview Joel Osteen from Lakewood church. Joel Osteen is a religious TV personality who is often criticized by some as being too soft. He made the point that people had been beaten down for so many years with guilt and negativity from the way religion can be presented. He was simply focusing on the good of God and people respond to that (not trying to debate religion here, just using the example!).

I immediately thought, “Isn’t that what has happened with nutrition and health?” Haven’t people been so beaten down with all the shoulds and negativity that the enjoyment of eating has been lost? People bring this nutrition baggage with them when they start a family — being overwhelmed with parenthood — and often turn away from nutrition and health. The worst part is the guilt they suffer knowing they should do better.

I met a mom recently who said she feels guilty for feeding her children “badly.” When I asked her what she fed them, yes, there were quite a bit of chicken nuggets and fries but they also ate a lot of fruit and had balanced dinners most nights. After I pointed out the good things going on — and that she could start with some small changes — she had a whole different attitude.

I guess what I’m trying to say is we need to change the way we view healthy eating. It’s not a destination or about perfection but a journey that can actually be enjoyable (and taste good!).

What do you think? What do you see holding families back from eating better?