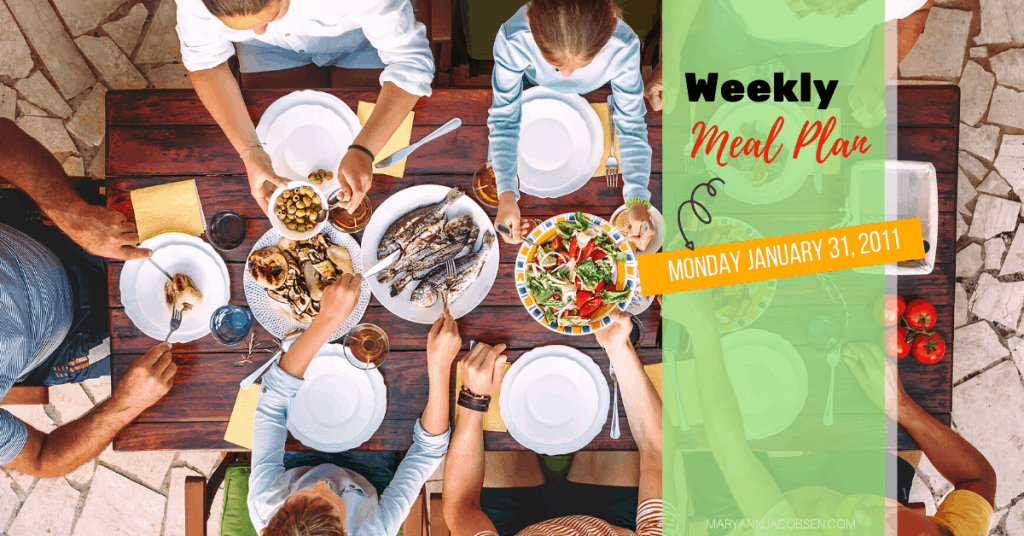 It’s the last day of January. Can you believe it?

This week I’m attempting to make Spanish rice. Why? Big A loves it. I’ve tried this recipe but it’s not authentic enough for her. She always eats the Spanish rice in restaurants or when we eat takeout at home.

The truth is I’m insecure about my rice-making abilities. My sister-in-law gave me a rice cooker which is perfect when we want plain rice with stir fry. But when I try to make Spanish rice or brown rice it never turns out fluffy. But I learned a secret from searching online: don’t stir the rice when it’s cooking. I’ve always been a huge stirrer.

Monday: Turkey tacos with Spanish Rice and all the toppings

Tuesday: Ravioli with Spinach and Sun-Dried Tomatoes with fruit and roasted green beans

Friday: Make our own pizza night

Sandwich of the week: Turkey and avocado

Salad of the week: Apple, Pecan, and Cranberry with Baby Greens

A while back I mentioned how Big A (my 4-year-old daughter) was pushing my buttons when it came to food. She started refusing food I knew she loved (fruit!) and acting pickier than ever. I had to recommit to the Division of Responsibility because I veered off a tiny bit — and think Big A could feel my frustration which fueled her behavior.

I’ve noticed that when I’m feeling unhappy it’s almost always due to my trying to change something I can’t. The problem arises, I try to control the wrong things, I get frustrated and then, finally, I let go. It’s in letting go that things seem to work out. But letting go is different than giving up. It’s really just letting go of what I want the outcome to be.

And low and behold after Big A’s 4th birthday I noticed a change in her. She’s trying more foods — about half of new items. She’s eating some of the different items I send in her lunch like turkey sandwiches. And her eat-only-tortilla phase is kind of over (this is when we eat Mexican food — she’ll scrape everything off the tortilla and just eat it!).

I know we all want our children to devour the veggies and eat a good amount of what we serve. But kids’ eating progress is usually in small chunks. And what I like about what’s going on with Big A is she’s the one making the decision to try food.  She not eating something because I’m insisting on it or tricking her. And that makes me — and her– feel good.

A British study came out saying that childless couples eat healthier than those with children. This made me stop and think: do I eat better or worse now? I would just say I eat differently — not better or worse.  I do eat more fruit now and cook way more. But the thing I do a lot less of is eating out. You know how it is when you don’t have kids. The refrigerator can be empty for a couple of days and it’s no big deal. 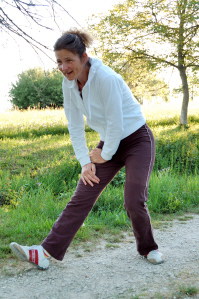 This news was very timely as I recently had a physical and lab work done and was able to compare my cholesterol levels to my old 1999 and 2001 numbers.  This was a time I was probably in the best shape of my life: ran marathons, got 8 plus hours of sleep, and worked at the gym frequently.

It was nice to see my total cholesterol and bad cholesterol levels low but I couldn’t believe my good cholesterol went down so much. The only reason I can think of is that I exercise less now which is related to HDL levels.

So the status of my health is good but it could be better.  More exercise is always my goal. Not just for my health but for my state of mind.

I feel relieved to have my health stuff done because I had been putting it off for so long. I also had a mammogram and a super-fun colonoscopy!

How about you?  Are you keeping up with your health after having kids?