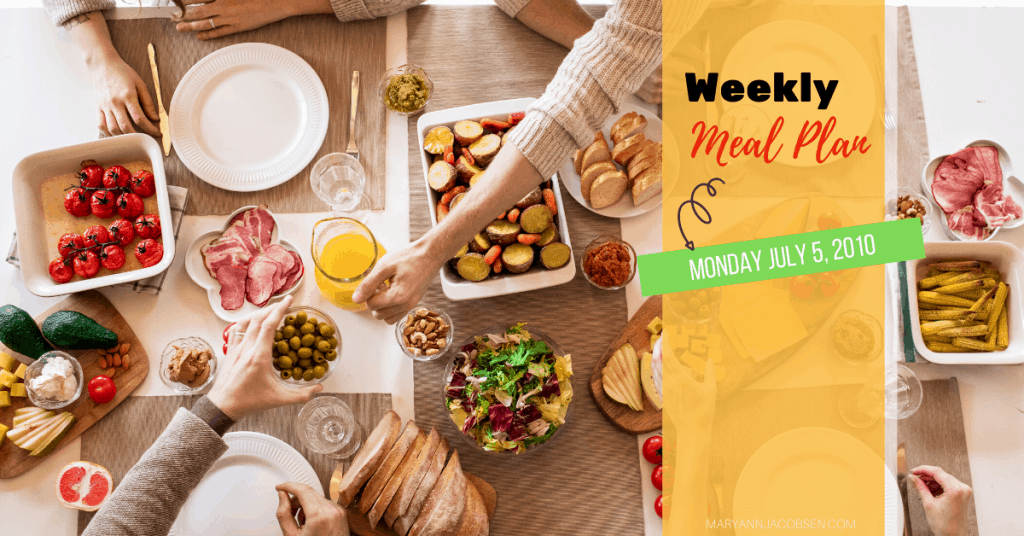 I hope you all had a wonderful 4th of July. We had a fun day but made it home nice and early. Our kids are still too young for fireworks so we didn’t get too crazy.

I’m cooking less this week because we are going out to dinner on Monday for my mother-in-law’s birthday. I plan to try this awesome looking halibut from Food on the Table’s No Whine Wednesday that incorporates a fruit-based salsa. I’ll make salmon and bean burritos for lunch to get to my fish and beans twice a week goal.

I’m having a little trouble coming up with an 8-hour plus slow cooker recipe for Wednesday (workday) now that’s it’s summer. The meals that look appealing to me are not “all day” slow cooker dishes. If you have any long slow-cook meals you like to send them my way!

Monday: out to dinner

A few weeks ago I posted about my daughter hounding me for ice cream every night. I’m happy to report that she has calmed way down. We still have ice cream a couple of nights a week, but it’s no longer a huge focus for her.  Sometimes I forget the process kids go through while learning about different foods. They go through stages where they “have to have” a certain food but if given the chance to eat it within the structure of meals, the novelty wears off.

My daughter has also been trying more foods. Since she turned three, she has been very food neophobic (afraid of new foods), something I discussed in my last article in the picky eating series.  After serving a salad for what seemed like a million times, she finally ate the lettuce part instead of picking at the fruit and nuts.  We had tilapia Saturday night and she announced, “I’m trying fish.”

On Friday, we were at a friend’s house for dinner where there were three large dogs. My daughter has always been frightened of dogs even though we assure her that they won’t hurt her. She seemed to do much better with the dogs and when we gave her positive feedback she said, “I’m trying not to be scared of dogs.”

Noticing she has been trying more foods, I asked her if she was doing the same thing with her eating and she said “yes.”  We had a nice talk about how it’s good to try new things even when you feel afraid.

There’s the belief that if left to their own devices, children won’t try new foods on their own.  But with enough time, encouragement, and opportunity, kids will surprise you. I know mine do.

My non-fruit eating 15-month old (besides apples and bananas) now is eating cantaloupe.

An interesting study was published in last month’s Judgment and Decision Making. The researchers presented 114 college students with two sets of Oreo cookies: one without health claims and another labeled “made with organic flour and sugar.” They posted the calories per serving which were identical.

Despite the calories listed out, the subjects perceived the organic cookies to contain fewer calories and said it was okay to eat more of them.

This study adds to a growing body of research that shows that “health halos” around foods perceived as healthy can lead to overconsumption. Brian Wansnick, the author of Mindless Eating, has done some interesting research on this subject. In his 2006 study published in the Journal of Marketing Research, he found people ate 28 percent more M&Ms when they were labeled as “low fat.”  Those same people underestimated the calories of the M&Ms and denied that low-fat labels affected their intake.

I think this kind of stereotyping around food is an overlooked cause of obesity.  The idea is good/healthy food = eat as much as you want and that bad/unhealthy items are so bad for gaining weight they should be avoided.  This means people need excuses to eat the bad foods they enjoy such as vacation, TGIF, stress, uncomfortable feelings, and holiday celebrations.  How many times have you heard someone say, “I’m on vacation, I’m going to eat whatever I want (third helping).”

This is why focusing on hunger and satiety, no matter what food is being eaten, is best. We also need to be careful about how we educate our kids about nutrition so they don’t see food as “good” or “bad.”  More about this topic in a future post.

If you want to read more on healthy halos, check out Janet Helm’s post, The Devilish Effect of a Health Halo, over at Nutrition Unplugged.

Any thoughts on this?  Was there a time you used to eat more because you thought the food was healthy?  I know I did this in the nineties.  I ate enough fat-free frozen yogurt to last me a lifetime.

Want to create your own dinner rotation? Check out Maryann’s book The Family Dinner Solution.