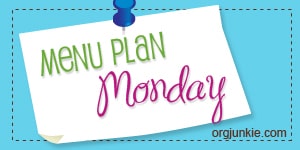 I love that we are going to have longer days with the time change but losing an hour this last weekend was rough. I’m sure you can relate.

This week I’m making baked ziti, a dish I usually make for friends who just had a baby. It’s the perfect “make ahead” food to drop in the oven close to dinnertime (I have plans that night so easy for the hubby). The pork fried rice is new and instead of our regular salmon sticks I’m going to make tilapia fish sticks. We don’t eat meat on Fridays during Lent so we’ll be doing fish or beans for the next few weeks on Fridays.

Switching places
When Little D was born he was everything Big A wasn’t in terms of eating. Not only did he latch on to breastfeed, he never let go. While they both ate a big variety in the first two years, Big D had an insatiable appetite and was smaller to boot. But it was nice at the time I had one child who was very resistant to food, to have another who was like a human garbage disposal. There were no leftovers in those days.

Now it’s like they have switched places. Big A’s appetite is more robust than Little D’s. She tries most foods now while he refuses new items. But it bothers me less with him because I have seen how children really do change with time. Little D still loves to eat and eats enough of a variety to get him by.

One food Big A still doesn’t eat is eggs. A few months ago she tried eggs for the first time since she gave them up as a toddler. This is a big step from previously not wanting to be near them due to the smell. So when I served them to her the other day, I mentioned how it had been a while since she tried them and I reminded her that she gave them a “sideways thumb.” After trying a food Big A will give a sign of either thumbs up, thumbs down or thumb sideways meaning there’s hope but she isn’t there yet.

So this was her reaction to the egg. A thumb between sideways and up. Progress!! 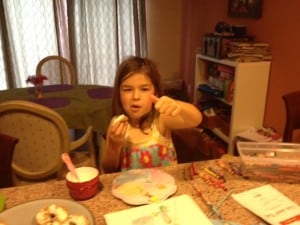 News: food addiction and chocolate milk
There was an article in the New York Times you might have seen, entitled “The Extraordinary Science of Addictive Junk Food.” The media has really gleamed on to this type of story but the truth is that food addiction is still a theory and is not something widely accepted by health professionals. A 2012 opinion piece in Nature Reviews outlines the shortfalls of the theory, what research needs to be done, and why it doesn’t apply to everyone as summarized on Neurotic Physiology:

First, it becomes readily apparent that we are dealing with a small portion of the obese population. The vast majority of overweight or obese people do not binge eat, or even eat that much more than normal weight counterparts. The increased availability of food, decreases in physical activity, and other environmental influences are more than enough to create excess weight without addiction-style eating. When we talk about people who are exhibiting food addiction-like behavior, we are generally talking about people specifically who binge eat.

It’s not that I don’t think “food addiction” has some merit, but I think it is oversimplified and the other, more controllable reasons people overeat are left out of the picture. Evelyn Tribole writes about the variety of reasons people “reward eat,” one being the mismanagement of hunger: “Hunger by itself, enhances the reward value of food, in which more dopamine is triggered… Dieting (which can be a form of chronic hunger) also has this effect.”

I recently stumbled upon this really thoughtful article by Marc David on the Psychology of Eating, that discusses how one’s state of mind greatly impacts eating — something I wish the media would report on. Studies show that people eating identical foods will eat more or less due to their beliefs about the food (for example being told the item is healthy or higher or lower in calories).

What’s amazing is that each of these eaters will metabolize this same meal quite differently in response to her unique thoughts. In other words, what you think and feel about a food can be as important a determinant of its nutritional value and its effect on body weight as the actual nutrients themselves.

What bothers me the most is that people (and parents trying to raise healthy eaters!) end up feeling helpless due to these fearful addiction messages. Yet there is a lot we can do to put ourselves — and our children — in the driver’s seat. We can raise children to have a healthy relationship with food and manage their hunger effectively while exposing them more frequently to whole food items. Asking people in a food-plenty environment to abstain from eating palatable foods has not been shown to work long-term while the evidence for a mindful and/or intuitive eating style is growing.

What do you think about all these food-addiction messages?

Also in the news is chocolate milk! On WebMD I write about the petition from the International Dairy Foods Association (IDFA) and the National Milk Producers Federation (NMPF) to amend the standard of identity for dairy products. If this were to go through, then chocolate milk (at schools too) would no longer be required to carry the claim “reduced calorie” or “reduced sugar” that signal the beverages has no-calorie sweeteners like aspartame. I don’t agree and explain why.

Okay, that’s more than enough for one Monday. Leave a comment and if you can relate to any of this!