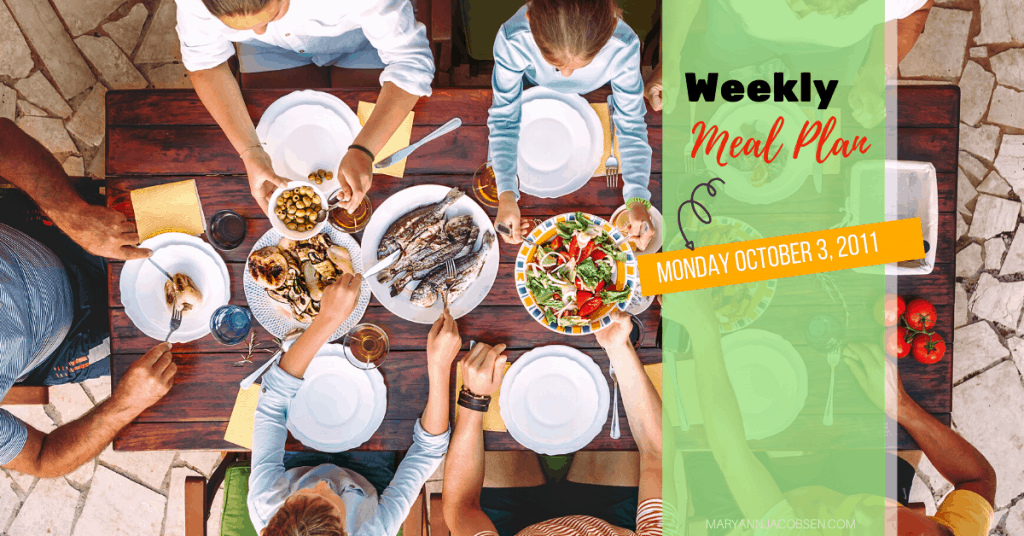 Now that October is here I’m excited to use the slow cooker more. This week I’m making slow cooker turkey chili and will be trying a different soup every other week — freezing what we don’t eat. I want to have tasty soups with meals and will be posting my favorite recipes.

I made the tortilla pizzas last week and they turned out great by putting them straight on the rack for a crispier crust. I served with smoothies and a big salad. The kids ate them up. So they get a repeat performance this Friday.

Monday: Shrimp tacos with black beans and toppings (winging it with some ideas from Real Simple Magazine)

Small changes as my girl turns 5

Big A is turning 5 one week from today. I write about her a lot because she’s a picky eater. And believe it or not, I feel fortunate for that. Why? It helps me better relate to parents who are facing the same issue. Well, because picky eating is a normal part of development, that is probably most of you. Of course, it all depends on your kid’s age and his or her Eating Personality.

I’d love to write about how Big A eats exotic foods and never wants the kids’ menu at restaurants. But I’m sure that would only annoy you — and it’s just not what most parents experience.

That said, I’ve noticed a change in my girl. While she used to only eat the crust on pizza, she now eats the whole thing. She used to just hold her smoothie and now she drinks it — and begs me for it! The biggest change of all is her appetite. She still has days where she doesn’t seem that hungry but overall her appetite has increased making her more interested in food.

Yes, these are all small things. She’s still not devouring broccoli or choosing salad but I think this is how kids move along food acceptance: in baby steps. I was recently interviewed for an article and the gal interviewing me said that’s how she ate growing up. She first put some meat in her taco shell. Then as she got a little older she added tomatoes. Then after that some lettuce and salsa. You get the idea.

And even if I could, I wouldn’t change my little eater because it’s a part of who she is. She cautious about everything and I’m realizing as she gets older that’s not such a bad thing.

What changes have you noticed in your kids?

I’m sure you heard about the Dr. Oz arsenic and apple juice scandal. His team tested the arsenic levels (on the show) in apple juice and found that they were higher than what is deemed safe.

Certain health professionals, the FDA, and the companies that had their products tested said Oz didn’t use proper testing and measured total arsenic which includes both inorganic and organic arsenic — when inorganic is the main concern. According to the FDA’s testing, apple juice has very low levels of inorganic arsenic, almost at 0.

I think the last thing parents need is something more to worry about (unless it’s really something to worry about). Yes, we need to be aware of where our food comes from, but when exposing the potential risks we need to do it responsibly and follow the appropriate testing, letting the public know all the facts.

Also in the news was a report saying that fish oil, both in pregnancy and breastfeeding doesn’t make kids smarter. And I have to say: I don’t care.

I didn’t take fish oils during pregnancy to make my children smarter, I did it to help meet their needs for the essential fatty acids DHA and EPA. In the last trimester, DHA accumulates in brain tissue at high rates and this continues until age 2.

When it comes to this topic of essential fatty acids and children, I think it would be more beneficial for researchers to figure out how much is needed.

The U.S. is behind other countries in establishing recommended amounts of DHA and EPA throughout the life-cycle. I fear headlines like this give parents the wrong impression that these fatty acids don’t matter when they do.

Read: DHA for Kids: The Complete Guide for Parents

Well, that’s enough babbling for now. Got something on your mind? Let me know in the comments.

Have a wonderful week!