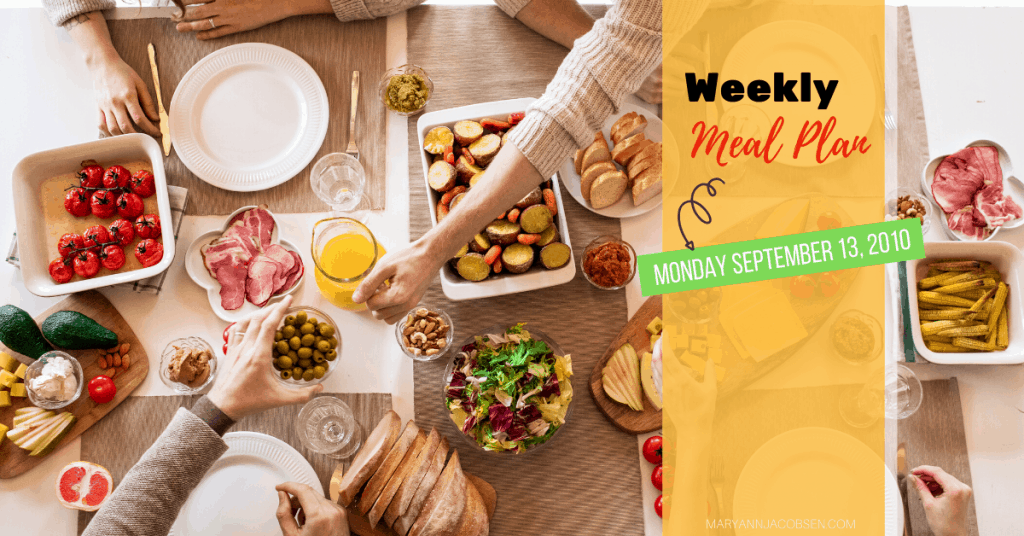 Happy Monday!  I hope you all are enjoying the fall season.  The weather in San Diego has been perfect — cooler but not too cool.

The latest new meal we enjoyed was homemade macaroni and cheese. It was on the menu for Friday but due to a hectic day, I wasn’t able to put it in the oven until way too late (it takes an hour to cook).  I ended up feeding my kids something different in order to get them in bed on time.

So at almost 8 pm my husband and I sat down to an intimate macaroni and cheese dinner.  Because it was so late I didn’t even make the salad. But we did have it with some wine. Pathetic, huh?

I’m trying a couple of new recipes this week. I’m going to make a chicken pot pie stew in the slow cooker. I’m not a huge pot pie fan but this one looks interesting and it has lots of veggies in it.  I’m also going to move fish earlier in the week because I notice Fridays are unpredictable so fish doesn’t always happen.  And there’s a new spaghetti recipe thrown in there.

Thursday: Leftover/will make some beans to make sure we get beans twice this week

I think that by now most kids are back in school. If you missed it, last week Foodie-isms ran its Lunch Box Love Series.  I wrote the intro about nutrition and there were plenty of awesome food ideas for packed lunches.

Now that I’ve started making lunches for my daughter, I see the dilemma parents face.  You can get all the lunch ideas in the world but that doesn’t mean your child will eat it.  I see how easy it is to pack only what your kid is likely to eat.

So far the only main entree my preschooler will eat is an everything bagel with cream cheese.  She did such a good job eating the first time I sent it that the teacher made a point to say I had a “good eater” and described how she attacked the bagel.

Do I continue to only make that for her?

Yes and no.  I think it’s important to provide kids with foods they like but it’s also important to expose them to a variety.  So last week it was bagels with cream cheese and this week it will be a turkey sandwich.  I’ll make sure there are plenty of sides she likes such as fruit, whole-grain crackers, cheese, and veggies for dipping.

I know she’ll ask me for the bagel and I’ll tell her that she’ll get it again soon but that we “don’t eat the same food all the time.”

Tomorrow Little Stomaks is hosting a blogging carnival for childhood obesity by rounding up bloggers to provide tips on the topic.

Most of the talk about obesity typically centers around eating and exercise.  But lately, the news has been reporting another contributing factor: sleep.

Back in March, a study published in Pediatrics revealed that preschoolers who participating in regular routines such as adequate sleep, less than 2 hours of screen time, and eating dinner with their family were 40% less likely to become obese.

A study published in the September issue of Archives of Pediatric and Adolescent Medicine showed that children under 5 who got less than 10 hours of sleep at night were twice as likely to become obese than kids who got 10 or more hours. And another recent study in the journal Sleep found that teens getting less than 8 hours of sleep at night ate more fatty foods and snacked more than kids who got more slumber.

There are many theories as to why a lack of sleep is associated with higher weights which I discuss in my first parenting tip.  Some scientists believe it disrupts hunger hormones making people hungrier.  Being tired also makes “using food to get through the day” more attractive.  And who feels like exercising –or exerting much energy — when they are tired?

I think a lot of this has to do with routine and structure.  Everyone always says that kids thrive on structure, but don’t we all.  Having regular meals, going to bed around the same time, and setting aside time to be active is all part of good self-care.

So tell me. Does your family have routines and structure?  Is sleep an important part of that?

Have a great week!

Want to create your own dinner rotation? Get step-by-step help in Maryann’s book The Family Dinner Solution.