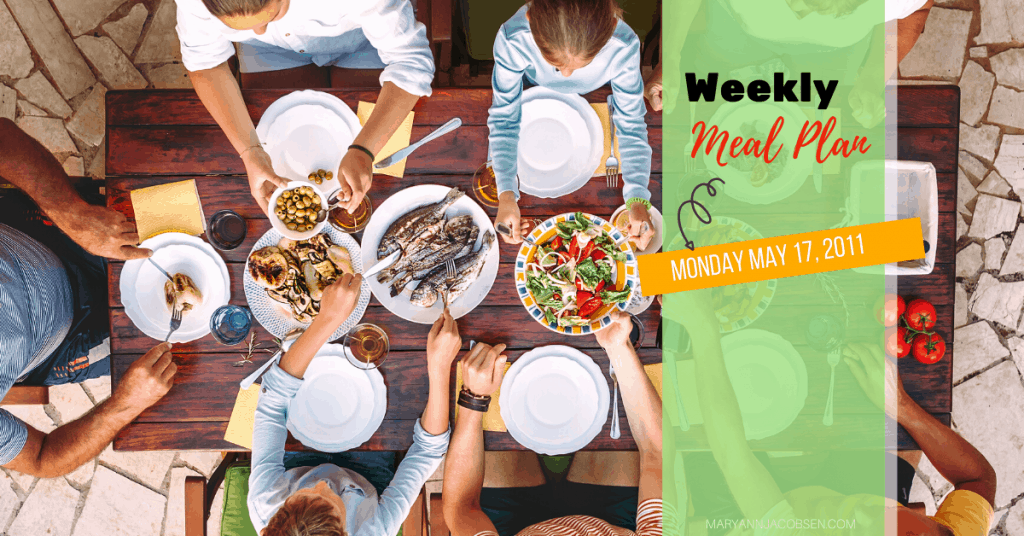 This is a little late but I have a good reason. My daughter woke up early Monday unable to walk on her knee, which she fell on the night before. We rushed to urgent care, which really should be called “be-ready-to -wait-a-long-time-and-bring-toys-to-keep-your-child-from-driving-you-crazy” care.

Luckily she’s fine, but it just goes to show you that with kids, you never know how your day, or week, will go.

I needed some meal inspiration this week I took out my favorite cookbooks. This easy tortilla pizza and black bean and mango salad sounded good. For stir fry night I might try beef for a change (I’m not totally committed yet).

Monday we had leftovers from the Sunday dinner I hosted, which includes this recipe for Spanish rice that turned out great! Could it be the one? I’m not sure yet…

Friday: Salmon with brown sugar and mustard glaze, Black bean and mango salad (the same book as above — will be sure to post if this turns out), and green salad

I’ve been dealing with an interesting challenge lately. I noticed when Big A turned four that she only drinks milk out of her sippy cup with a straw even though I always offer milk in other cups at mealtimes. While she will take one sip here and there, she saves her main milk drinking for her one special cup.

I started thinking….when should I stop the sippy cup anyway? I checked with my friend Jill Castle, a pediatric dietitian, and she reviewed the guidelines for me. Apparently kids are ready, developmentally, to give up sippy cups between 24 months and 3 years of age. It’s important that they drink out of open cups, which Anna already does.

She hinted at something I already knew — this was a habit that my daughter had and breaking it was going to be similar to getting her off a pacifier. Jill suggested creating a reward system: every time she used a different cup she would receive a star and once she received so many “stars” she’d get a toy or some other treat (not food).

This brought back memories of unsuccessful potty training. The star system didn’t work with Big A. While she wanted the toy that came with 5 stars, it never was enough to get her going on the potty.

We had a short-lived star chart system going as I realized it was making meals less fun. I took Big A to get new “big girl” cups, as Jill suggested, and she’s getting her straw sippy once a day in addition to her new cups. This is the gradual phase-out plan. The truth is I don’t mind if she drinks out of the straw sippy cup once and a while, as long as I know she’ll accept milk other ways. I mean, she’ll drink water anyway she can get it.

Is anyone else dealing with this? 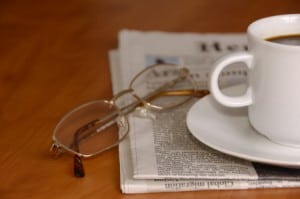 People often tell me they wish health experts would make up their minds. I understand this point of view but it’s important to realize that research, while far from being perfect, at least gives us something to go on.

With this in mind, let’s revisit some of the conflicting nutrition news as of late.

The Calcium Debate: In April, a study was released agreeing with previous research showing that calcium supplements may increase the risk of cardiovascular disease. The study, published in the British Medical Journal, reevaluated data from the Women’s Health Initiative examining women taking calcium with vitamin D but also included the use of personal supplements. There was a modest increase in heart disease, especially heart attacks.

Hopefully, with more research, we will get some answers. While the latest study included D and calcium, we still don’t know if the women were getting enough D to absorb the calcium. What about the type of calcium — are some worse than others? This can be disheartening for many older Americans taking calcium — and experts, by the way, don’t recommend people stop taking supplements without talking to their doctor.

There’s nothing to be panicked about because the increase is modest, and more research is needed. Bottom line: Doctors and individuals need to explore meeting their calcium needs through diet before taking a supplement.

Low Sodium Diets Questioned: A study published in the May issue of the Journal of the American Medical Association, showed that relatively young people, when followed over the course of about 8 years, were more likely to die from heart disease the lower their sodium consumption was (yes I said lower).

Sometimes there are outlier studies, like this one, contradicting a large pool of evidence. The Lancet, a prestigious medical journal, even weighed in on this study with the following response:

“At a time when cardiovascular disease is the world’s leading cause of death and excess dietary sodium has convincingly been shown to be a serious public health hazard, the results of this work should neither change thinking nor practice.”

I know it can be confusing but we need research. What nutrition issues confuse you most?