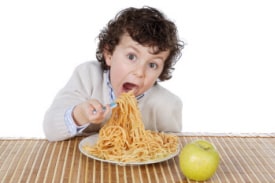 We are coming off a jam-packed weekend, which is why this is going up on a Tuesday. Big A had her birthday parties (one with friends and the other with family) along with a slew of other activities. When the alarm when off on Monday at 5am, I simply couldn’t get up.

So last night we had leftovers from entertaining all weekend. Today, I’m going to try spaghetti squash in lieu of regular spaghetti with turkey meatballs and pasta sauce. And I’ve been eyeing frittata muffins, which look easy enough for a Friday.

Tuesday: Spaghetti Squash with Marinara and Turkey Meatballs with green salad and bread

Forgetting my own advice
Last Monday, I worked all day and came home to hungry kids. My mother-in-law provided a substantial snack but Big A seemed on fire with hunger. In these cases, which don’t happen frequently, I usually allow fruit. I was rummaging through David’s lunch box and Big A spotted two hummus wraps.

Her: I want that!

Me (again): What do you think?

Big A often has turkey and ham wraps in the same bread (from TJ’s). Sometimes I forget my own advice that children are more likely to accept something A) when they are hungry, and B) when it is wrapped in the familiar. So your child likes a certain sauce? Put a new (or disliked item) with the familiar sauce. If you child loves a certain type of pasta, try a new sauce in it.

I think a mistake parents make (and I’ve made it too) is that we present a meal with a bunch of new things and that can be overwhelming for little ones. Now that Little D is LOVING smoothies, for example, I’m upping the ante, making small additions with his approval and help. That’s the strategy with the spaghetti squash this week.

So guess what was in Big A’s lunch the next day, and already planned for next week? Hummus wraps!

Arsenic, mercury oh my!
Within the same week there was news of arsenic in rice and concern about methyl mercury in tuna. My writing partner for Fearless Feeding, Jill Castle, wrote a nice summary on rice’s safety and how it relates to feeding children.

This article written by Dr. David Katz on the same topic hit a nerve with me. I try not to panic over the little things that may cause harm in the food supply. I like to look into the research first before allowing the startling headlines to get to me. Katz discusses the downside of panicking, including cutting the often beneficial food out:

But inevitably, when a peril in our food or medicine cabinet or environment is pointed out to us, it invites the hyperbole of concentrated media attention, an inclination to invoke conspiracy theories, and at least some temptation to panic. When we do give in to panic, we tend to jettison the baby along with the bath water, resulting in net harm.

I prefer to focus on what I can control like my family’s overall eating and exercise pattern. We have research to show that the big things matter more than the little things as Katz also points out:

We have known for decades that the four leading causes of chronic disease and premature death in industrialized countries are smoking, poor dietary pattern, lack of physical activity, and obesity. Yet these four are routinely ignored or neglected by people who get very worked up over the latest chemical threat in our food or environment. We should not ignore big risks just because they are under our control, nor exaggerate much smaller ones simply because they are not.

So I will keep watching for updates on arsenic in rice and whether or not mercury is a concern — and focus on what I can control. Because all this worry about food can also negatively affect health and well being. And parents have enough to worry about.

How do you handle these scary food reports?