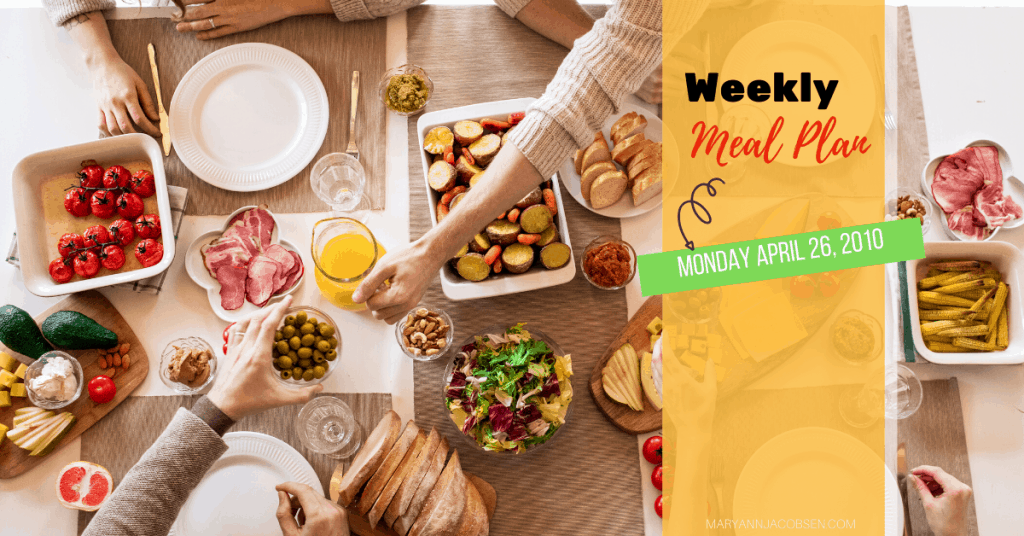 I was happy with how last week’s meals turned out. The pork tenderloin was tender and juicy. The Pineapple gave it a Hawaiian flare and it was just as good (if not better) the next day. The Boboli thin whole wheat crust was an easy and tasty way to have pizza. I didn’t make the cod on Friday because we ended up going out to dinner for my brother-in-law’s birthday, so I will try it again this Friday.

This week for Monday Mexican night I’m going to make Turkey tacos but will change things up a bit. I’ve been reading some recipes that add salsa and different spices to the turkey while it’s cooking. I’m also going to make veggie lasagna in the slow cooker. I’ve tried this recipe before and it’s super easy and tastes just as good as my time-intensive veggie lasagna.

Wednesday: Slow Cooker Indian Spiced Chicken and Lentils (can easily be made vegetarian) with carrots.

My 3-year old daughter, Anna, is very cautious with new foods. As most of you know, I follow the Division of Responsibility of Feeding. I decide what she eats and she decides how much and whether to eat the food I serve.  Over the last few months, I’ve been talking to her about where different foods come from and why it’s important to try something before deciding whether or not she likes it.

It seems every time Anna tries something new, it is clearly her own decision. For example, last Friday we were having sandwiches. I was eating turkey and she had PB&J. I meant to give her half and half (half turkey half PB&J) but I wasn’t happy with the way my sandwich turned out. Anna has never taken to turkey but I keep trying.

After eating her grapes she announced that she wanted to eat my sandwich.

Anna: “I want to eat your sandwich”

Me: “Of course sweety”

Anna: “I want to take bites”

She took two bites of my turkey sandwich and after the second bite made a funny face. I asked her if she wanted to eat “just the turkey” part of it and she ate two pieces while I finished her PB&J.

Then, Saturday after her nap she asked for an “egg” for her snack. This made me very happy because Anna stopped eating eggs awhile ago except for French toast. So I got out the last boiled egg in the fridge and began to crack it.

Me: “I thought you said you wanted to have an egg?”

Anna: “I want a chocolate egg!”

I had to explain to her, very carefully, that chocolate eggs only come around during Easter. Just like Santa and Christmas.

The winner of the slow cooker giveaway is Mary from Florida. I really appreciate all of you making this giveaway such a success. Because this one was so much fun, I’m planning on something bigger and better for next time so stay tuned.

As far as food and nutrition news, sodium has been taking center stage.  Last week the Institute of Medicine released a report recommending that the government regulate the amount of sodium food manufacturers and restaurants can add to their products. According to the report, Americans get an average of 3400mg of sodium per day which is higher than the Dietary Guidelines recommend (2300mg).  They also estimate that 100,000 lives could be saved with reductions in sodium.

There have been voluntary commitments from food companies to gradually lower the sodium in their products.  And The National Salt Reduction Initiative, a New York-led nationwide effort, is working to help reduce sodium intake from packaged foods and restaurants over the next five years.

I for one tend to cringe at the thought of government taking over here. I am all for volunteer initiatives but mandates from the government, I believe, go too far.

So what do you think?  Do you believe the government should regulate the sodium intake of packaged and restaurant foods?

Want to create your own dinner rotation? Get step-by-step help in Maryann’s book The Family Dinner Solution.