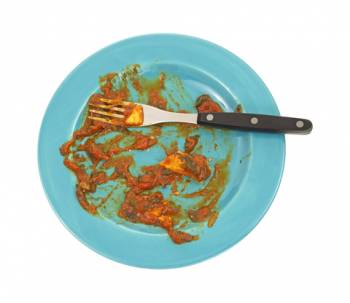 When Gina’s father was a child, his family lived on cabbage soup sometimes for months because they had nothing else. So when he had children, they were made to appreciate what lucky ducks they were to have food. Gina wasn’t allowed to not take something and if she refused to eat it she wasn’t allowed to leave the table. So she would sit there with ice-cold Brussels sprouts because she was made to “clean her plate.”

“I hate what it’s done because I do still clean my plate, even if I am full or don’t really want to eat,” she said. “I will also eat my daughter’s leftovers so that we don’t waste them. And I hate that – I’d love to NOT feel that guilt and just be able to toss things.”

This is the third post that examines what feeding practices can result in “20 Years Later.” The first one dealt with rewarding with food and the second, forcing a child to eat. Here, we are focusing on the long-term effects of having children clean their plates.

What Does The Research Say?

There are inklings from the research that show the long and short-term effects of asking children to clean their plates aren’t good. In a 2007 study published in Journal of Child and Adolescent Psychiatric Nursing, 76 men and 86 women (21 – 84-year-old) were asked about their memories of food growing up. They were divided into the always normal weight, successful dieters and obese. The obese group reported the most food rules, frequently citing that they were made to clean their plates.

What is even more interesting is the research showing the opposite of clean your plate is beneficial. For example, a 2012 study examining data from Project EAT (young adults with a mean age of 25), showed that an intuitive eating style (using feelings of hunger and fullness to guide eating) was associated with a lower body mass index and lower odds of disordered eating compared to those who didn’t trust themselves. The women who stopped eating when full also had lower instances of dieting and binge eating.

It’s important to remember that this type of research does not prove cause and effect — and that we need more studies to confirm a relationship. 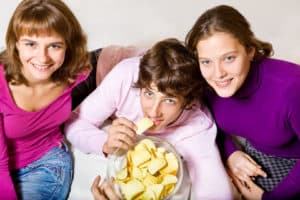 Considering that for most of human history food was hard to get and prepare, clean your plate is a practice that has been around for centuries and crosses all cultures. A parent simply couldn’t allow a child to take 2 bites if that was the only meal that was certain that day. And no one had to worry about kids growing up and being faced with large portions when eating out or the constant barrage of eating opportunities.

But the eating environment has changed tremendously with food now being cheap, available and big. According to the New Abnormal, a graphic developed by the CDC, a burger in the 1950s used to be 3.9 ounces now it is 12. Fries used to be 2.4 ounces now they are 6.7 and soda 7 ounces compared to 42!

“I feel strongly that it’s important to let kids listen to their bodies and to teach them how to do that,” said Jackie who grew up having to clean her plate. “I also think it is important not to get into a battle with kids about food, because frequently *if* they eat is all they can control.”

A Call to Action

Believe me — I know how tough it can be feeding kids. They may say they are full because they don’t like the meal or scream for hunger when they want something (like chips). But if you stay the course with regular meal times at the table, rotating their favorites and always making sure there is something at the table they like, they eventually get it and the whining decreases.

And it’s never too late to course-correct as Charlotte demonstrates. “In my 20’s I started thinking about it more and how it doesn’t make sense to eat everything just because it was in front of me, ” she said. “My husband and I have a balanced approach to eating healthy while also enjoying what we eat, which is what we try to teach our toddlers as they develop into adults.”

I ask every parent, teacher, and caregiver to consider if old, handed-down approaches to feeding like rewarding kids with food, forcing them to eat and cleaning their plates, are the type of lessons we want to teach kids. Will it help them effectively navigate a food-plenty environment as adults? I think it’s pretty clear the answer is no.

What do you think?

Want to find out more about raising a mindful eater in a mindless eating world? Check out Maryann’s book, How to Raise a Mindful Eater: 8 Powerful Principles for Transforming Your Child’s Relationship with Food.