It was Cultural Heritage Day at my son’s school and for lunch, parents brought in food from their nationality. As one boy sat down to his plate of unfamiliar food, he started to cry. I went up to him to see if he was okay and he said: “I don’t like this food.”

I went around to all the items, explaining what they were and that helped a little. He ended up picking up a churro to eat and started to calm down.

On the blog Mealtime Hostage, Skye, the mom of a selective eater, tells amazing stories about her son’s food journey. In this post, her son responded with “I’m not ready” after being asked if he wanted a food. Not only was this an insightful response, it reminded me what’s really going on when young children say they don’t like something. Basically, kids are saying “this food looks too challenging to eat.” It’s kind of like if you were served a meal of fried insects. Would you want to dig in or get comfortable with the idea of it first? 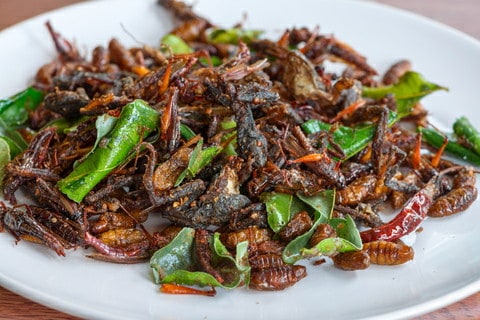 The typical response to “I don’t like it” from parents and adults is “how do you know, you’ve never tried it?” Then everyone tries to persuade the little one into eating the food by saying how good it tastes or healthy it is. This pressure and attention actually drives the child away from the food in question. All the while, the kid’s real challenge hasn’t been addressed at all.

So if a child isn’t ready to eat a food, the question becomes: can parents help the child become ready?

Giving children the support they need

When a child doesn’t feel ready there can be a few things going on. First, it could be, like the story above, that there is just too much unfamiliar food at once. Serving at least one thing your child is likely to accept helps them ease into positively experiencing different foods.

Another way to support your child is detailed in this excellent blog post from dietitian Sarah Remmer. After noticing her son’s disinterest in dinner she started to ask him this question: “What can we do to make this meal yummier for you?” Here’s what happened:

When I started asking my preschooler this question, it literally transformed our mealtimes for the better. And the answers were very interesting! One night, he asked for ketchup to dip his steamed broccoli into (after which, he gobbled it up), and another night when he said that he didn’t like his chili, I asked him if grated cheese would help, which ended up being a game-changer. Your child might need some ideas from you such as “Do you need dip for your veggies?” or “Would you like me to separate your meat from your rice?”, but nine times out of ten, you and your child might be able to come up with a fun way to make his meal more palatable.

Sometimes children need to learn more about the food for acceptance to occur. Examples include getting involved with preparation and playing with food without being disrespectful. Parents can also warn kids about the texture and taste of something new, where the food comes from and help them identify items that are similar to other things they eat.

My kids used to not eat salad at all! In fact, I would serve them salad for years, only to have them take one bite just because they had to.  But I didn’t stop. For years and years, I didn’t stop!  Until one day, they just started eating salad.  You know how they say it takes 8-10 exposures to a new food for kid to try it?  Try 8-10 YEARS! … It doesn’t bother me that it took so long! The bottom line is… don’t be frustrated.  Don’t make it a big deal, and be patient!!   The most important thing you can do is to continue to make vegetables the star of every meal!

So if your child says he doesn’t like a meal, it probably means he doesn’t feel ready to eat it. Whether it’s additional support he needs to get over the hump, or time and repeated exposure, parents can be more effective when they address what’s really going on.

Got a picky eater? Get the latest research and tips in Maryann’s book From Picky to Powerful