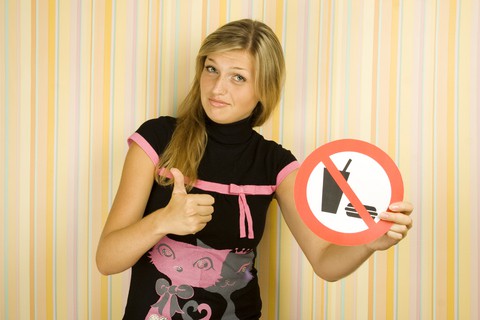 This week the LA Times ran this article about how some school districts are considering banning chocolate milk. This is not the first time specific foods have been banned to help fight childhood obesity. We’ve seen everything from banning the sale of homemade goods in New York to “sweet-free” zones and “no second helpings” in Minnesota.

I’ve been thinking about this banning business for some time now and cringe every time I hear about it being used as a strategy to help kids eat well. It’s not that proponents of this ban don’t have some points, it’s the message banning food sends to kids that bother me:

We can’t trust you around these foods, you are helpless to their allure.

Eating just one less-than-perfect food is bad for health and weight.

Be afraid kids, be very afraid.

Why fear and food don’t mix

When we teach kids that some foods are “bad,” it’s very conflicting to them. On the one hand, they enjoy these foods, but on the other hand, they keep hearing how bad they are for them. How many adults feel these same feelings of conflict: “I know I shouldn’t eat dessert but I can’t help myself.”

In some kids, but not all, banning and making single foods out to be bad make them even more attractive. The topic of banning chocolate milk came upon one of my nutrition lists serves and dietitian Rosanne Rust, author of Restaurant Calorie Counter for Dummies, summed my thoughts on this perfectly:

Even though many seem to think we aren’t getting anywhere with the concept of “moderation”, I don’t think we should give up trying to teach people how to choose proper portions of imperfect foods in the proper frequency. Children particularly need to understand this concept. Trying to create some sort of nutrition utopia for them isn’t going to help them make their own choices later in life.

Rosanne goes onto explain how she bans nothing in her home of 3 active boys. Her children get the choice of 1% white, chocolate or strawberry milk at home. Her kids choose white most of the time, but have the choice and enjoy the flavored milk occasionally. They are also allowed to eat some packaged snacks and even Pop-Tarts on occasion because she finds that what teens can’t get at home they seek out at neighbors’ homes, and possibly resent their parents for never buying them anything “good”.

She also feeds her kids lots of fresh food – they are offered vegetables daily, eat fruit daily and they prefer whole-grain bread and cereals. They enjoy the harvest of the family’s summer vegetable garden and help gather eggs every day from their six backyard hens.

“The whole idea of ‘banning’ food choices frustrates me because I happen to believe that children need to learn to make good choices independently,” she says. “Making balanced choices takes guidance from a parent initially, but every time these types of ‘rules’ are made, the choice is made for them, taking away the opportunity to learn how to balance ‘treat foods’ with more wholesome ones.”

Jill Castle, MS, RD helped re-vamp the food offerings of the cafeteria program at a private school in Tennessee. She said some parents wanted to get rid of the chocolate milk but instead, after hearing about the pros and cons, she decided to offer it once a week.

After sales of milk went way down, they decided to offer chocolate milk twice a week and everyone ended up pleased with the result.

“I don’t agree with vilifying any food because of the message it sends to kids, ” Jill says. “Ban chocolate milk because it is bad.”

This a great idea — offering items like chocolate milk less often or on certain days. This way, kids learn how all foods fit into a balanced diet.

And we can’t forget food items like chocolate milk offer vital nutrition too — and some kids simply don’t like the taste of milk.

Shelley Rael, MS, RD hated milk growing up but never had the choice of chocolate milk or even calcium supplements (her doctor thought they were only for old ladies).  Now at the age of 41, she goes between osteopenia (low bone mass) and osteoporosis on her scans.

“So, I do not agree with chocolate milk being banned,” she says. “If I had it I would have consumed it.”

What do you think about these food bans? Anything heating up in your area??