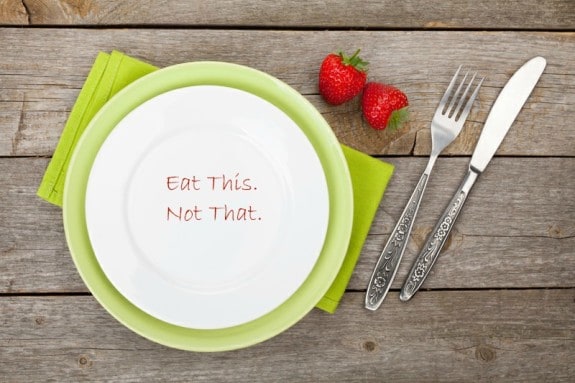 A parent emails me about her frustration with dinner. She used to make her son eat vegetables to get dessert. Now that she’s no longer using this tactic, he’s stopped eating any vegetables. She’s tempted to go back to her old way of feeding.

I talk to an acquaintance about her recent unwanted weight gain. As I try to dig into the potential contributors, she’s already planning what she can ban from her diet to take the weight off.

Controlling feeding practices are hard to shake. But when people can see that such practices hold them — and their family — back from life-long enjoyable health, it changes everything.

How controlling practices hook us

I view controlling feeding practices as using one’s force or will to change eating behavior. In the case of feeding kids, it’s a parent or caregiver insisting a child eats a certain way. When it’s feeding oneself, it’s self-directed.  It’s looking at eating at face value: X (not eating vegetables, weight gain) isn’t good, so I will change X (eat your vegetables, lose weight).

Controlling feeding practices are popular because they provide quick results. If we are angry about something food-related, we can instantly change the behavior and feel better. For example, seeing a child actually eat something green or feeling a less-bloated belly after a day of detoxing.

But when it becomes clear the strategy isn’t translating to long-term behavior change, it makes people even more dependent on the controlling feeding practice. Joey isn’t choosing broccoli on his own so his parents still make him eat it even though he’s almost a teenager. The new way of eating you’re trying works great until you break the rules  — then you’re back to square one. The effects of controlling practices reinforce their power as illustrated below. 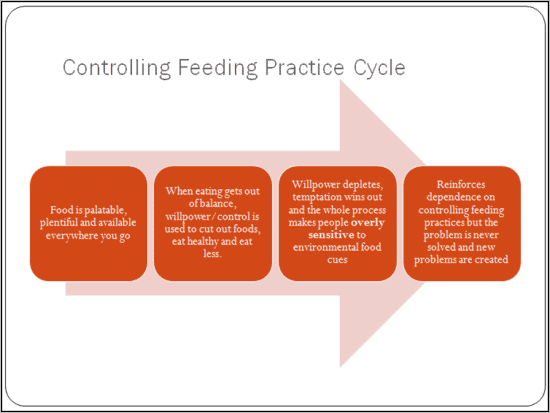 There are three key reasons why controlling feeding practices backfire. First, are what researchers call “resource depletion.” We only have a limited amount of self-control resources. So if someone is using willpower to follow a strict diet, this may work great at first, but once other life stressors kick in, willpower depletes and temptation wins. When it comes to feeding kids, parents can become inconsistent, trying to get them to eat one night followed by giving up the next night because they just don’t have the energy.

Second, restricting or controlling makes people more sensitive to environmental food cues. This can lead to what researchers call disinhibition, feeling out of control when finally eating a desirable food, the eating behavior most linked to weight gain. A link between mothers’ dietary disinhibition and daughters’ weight was found in this study.

And third, controlling feeding practices keep people from discovering the why behind food-related behaviors. Instead of jumping to change things, it makes sense to first be mindful of all the factors contributing to the behavior. Then, instead of using control, people can work on the root causes to fix the problem. 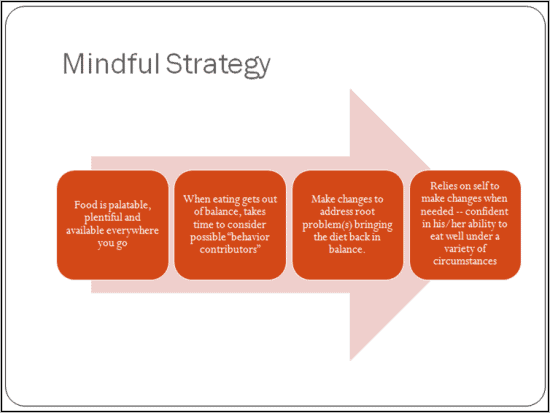 So let’s apply this to the two stories at the beginning of the post. Although the mom is tempted to go back to bribing her son with dessert, she decides to brainstorm why he is so averse to vegetables. First, the previous bribing didn’t help. If it did, he would now freely choose his veggies. She realizes he doesn’t view vegetables in a positive light so she shows him how she adds veggies to yummy foods like muffins and smoothies.

She gives him hands-on experience and talks to him about the texture and taste of veggies. She offers him condiments at meals, such as ketchup and ranch, and he starts taking some bites. Slowly she sees him warm up to vegetables but she realizes this is a process that takes time. But he’s on his way.

The woman who wants to lose weight thinks about all her previous weight loss attempts. If restrictive eating really worked she wouldn’t keep gaining weight back, right? And she could always go back to that strategy if she wants to. Instead, she takes a mindful approach. What drives her eating? She realizes stress plays a big role. By the end of the week, her willpower is gone. And there always seems a reason to indulge. Her breakthrough comes when she realizes she constantly makes excuses to eat indulgent food (e.g., stressful day, holiday, night out). Because she always feels guilty, she overeats. When she gives herself permission to eat indulgent foods sensibly, they instantly lose power over her.

She also asks her husband for support so she doesn’t feel so weighed down by parenting and her part-time work. Because she’s never enjoyed working out at the gym, she decides to join a women’s soccer league, a sport she loves. She goes for walks with friends to get both social time and exercise time. And she makes meals and eating balanced a priority…no more skipping breakfast or eating lunch in front of the computer.

These small changes feel good to her, so she keeps it up. She becomes aware of the foods that energize her and the foods that deplete her. In a year’s time, she loves her healthy lifestyle and feels she is at the right weight for her.

But what if she went on another diet? What if the mom chose to bribe her son with dessert? None of their underlying challenges would be addressed. Instead, they’d be a slave to controlling feeding practices.

I’m not denying we live in a crazy food and (lack of) activity environment that contributes to poor health. But using willpower and control as a way out only makes matters worse. I cringe when I think of summer-ready diet books coming our way soon. By now, we know exactly what to expect with each and every one of those books: more people back next year looking for another one to replace it.