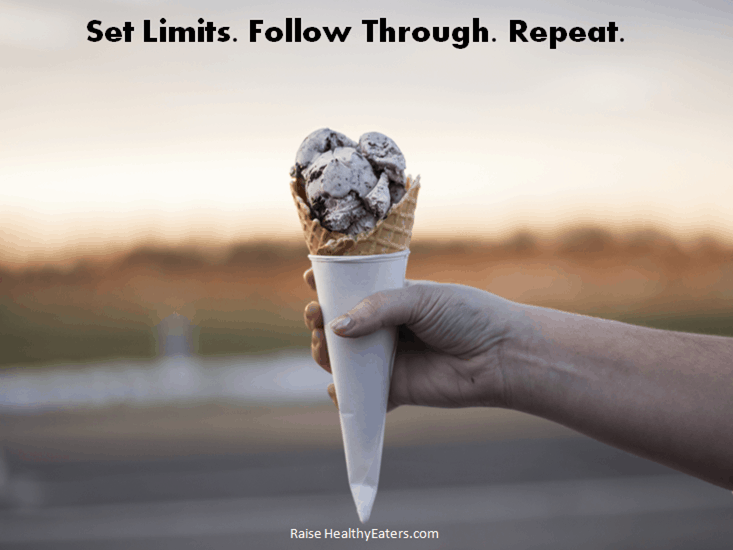 Janet was with her 5-year-old daughter at a playdate.  As it was coming to a close, the kids pulled out cookies and begged to have them. Janet wasn’t sure because it was less than an hour from dinner.  Plus, she had a fun dessert planned.

But there was her precious girl saying over and over, “Please mommy!” Janet hesitantly said yes. After all, her daughter might feel deprived if she doesn’t share a cookie (or 4) with her friend. And just as she feared, this resulted in a barely touched dinner and a second helping of something sweet.

While I don’t believe in restricting children from foods they enjoy, constantly saying yes to their food requests isn’t the answer. So let’s walk through when and how we can say “no” more effectively — and without fear.

Thinking through your decision

What factors into my decision of whether or not to say yes to food requests (usually outside the home) is the time of day and what my kids have already eaten. If it’s close to snack time then it will likely be a yes.  If they haven’t had something sweet — and want something sweet — it is a yes or a choice between now or later. If my kids ask for something for lunch and its close to what I was going to make — or a better idea– it’s a yes.  Sometimes I even add “that’s a good idea!”

But if it’s right before the main meal like dinner, I err on the side of no. If we already had something sweet, it is also likely to be a no unless it’s a party or one of those weekends.

But here’s the secret: I hardly ever just say no.

Following “no” with the why and when

In these two scenarios both parents are saying no, but one is more likely to be accepted:

1) “For the fourth time I told you no. PLEASE don’t ask me again. No cupcakes!”

2) “I know you want cupcakes but it’s too close to dinnertime. Plus, we are having your favorite pudding for dessert tonight.”

When parents constantly say no without explaining why they are making that choice and when the child will get the item (or something similar), children are left frustrated and wanting more. But when we add some context it not only softens the blow, it teaches children about balanced choices. 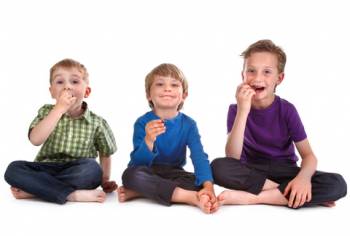 The importance of being heard

There’s a third often forgotten part to effectively saying no that’s important to mention: accepting and acknowledging a child’s feelings. In the popular parenting book How to Talk so Kids Will Listen and Listen so Kids Will Talk, Authors Faber and Mazlish describe why this is important:

Steady denial of kids’ feelings can confuse and enrage kids. Also it teaches them not to know what their feelings are — not to trust them.

Whether parents say something like “you don’t want that food, it’s junk,” or “there’s no way you could be hungry, you just ate,” it’s common to a deny a child’s feelings around food, replacing them with how we think they should be feeling.

Whether you are 1 day or 101 years old, it is part of the human condition to want to be heard and understood. So accepting and acknowledging your child’s feeling goes a long way, even when the answer is still no.

As I was writing this piece, this post made the rounds (5 Reasons Modern-Day Parenting is in Crisis, According to a British Nanny). While I tend to agree that parents need to set firmer limits, what’s missing is the how. Unfortunately, articles like these make parents feel like they need to choose between being strict or letting kids have their way. But what I’ve described above is an example of an authoritative parenting style, that middle ground that is not too strict nor too lenient. And the research on its effectiveness is pretty striking.

Consider this review examining 20 years of research on parenting styles and adolescent health risk behaviors. In it, the authors briefly describe the three type of parenting styles:

Authoritarian: high control, low acceptance: Kids are expected to “do as parents say” and kids’ feelings are generally disregarded. This type of parenting is described as rigid with a detached style.

Authoritative: high control, high acceptance: Parents establish clear limits but listen to, reason with and respect their children’s feelings. This type of parenting is consistent with a warm and responsive style.

Permissive: low control, high acceptance: Parents fail to set boundaries so children get a great deal of freedom. This type of parenting has low expectations with a warm and responsive style.

The researchers conclude the following:

In our review examining how various parenting styles influence adolescent health risk behaviors, our findings support those of previous similar studies indicating that adolescents of authoritative parents who have positive parental relationships, healthy open communication and perceived parental support, are less likely to report symptoms of depression or engage in substance use, sexual risk and violent behaviors.

This article in Parenting Science (updated 2013) summarizes it this way:

…there is remarkable agreement across studies. From Argentina to China, from the United States to Pakistan, the authoritative parenting style is consistently associated with superior outcomes, and it has never been linked with bad outcomes.

In Fearless Feeding, we show parents what an authoritative parenting style looks like when it comes to feeding kids from the high chair all the way to high school.

So yes, it’s okay, preferable even, to say no to a child about food and a slew of other things. But there is a more positive and effective way to go about it that makes both parent and child happy.  That’s what no one seems to be talking about.

For more on how to talk to kids about food check out Maryann’s book How to Raise a Mindful Eater: 8 Powerful Principles for Transforming Your Child’s Relationship with Food